The containers had fallen off a Panamanian-flagged ship — one of the world's biggest — in rough weather. Authorities are warning people to beware of the cargo washing ashore as some of it is hazardous. 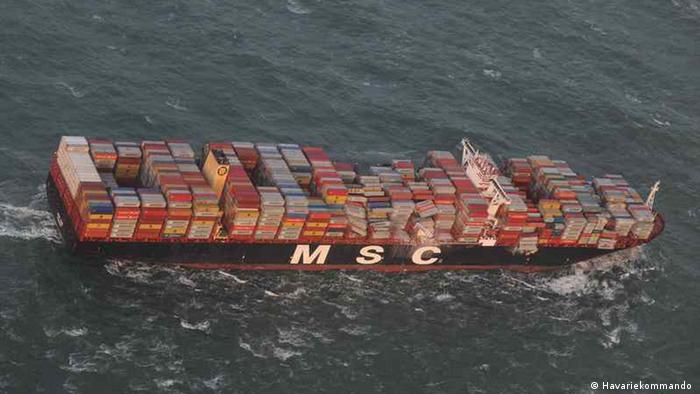 Up to 270 containers had fallen off the Panamanian-flagged MSC ZOE, one of the world's biggest cargo ships, in rough weather near the German island of Borkum in the North Sea, the Dutch Coast Guard said on Wednesday.

The containers floated southwest toward Dutch waters and by mid-afternoon on Wednesday, more than 20 containers had washed up on the Dutch islands of Terschelling, Ameland and Vlieland.

The Coast Guard warned the public to stay away from the containers washed ashore because three containers holding hazardous materials had not yet been located. Ships in the area have also been warned to beware of floating containers.

Local media carried pictures showing a surge of curious people checking out what had washed up. A person was seen carrying off what appeared to be a flat-screen TV still packed in foam.

The residents of these islands have a centuries-old tradition of collecting goods that wash up on their shores.

"It's just really nice of people," she told local news agency ANP. "Processing it would cost more than the stuff is worth, and anyway with the two officers we have, it would be impossible to guard; the stuff is littered over the whole beach."

Up to 80,000 rainbow trout have escaped into open waters after a cargo ship crashed into a Danish fish farm. Danes have been encouraged to take up their poles and start fishing, as the trout could damage the sea habitat. (12.10.2016)

The collision occured overnight between the British port of Dover and and the French town of Dunkirk. The English Channel is one of the world's busiest shipping lanes with more than 500 vessels passing through every day. (01.07.2017)