Germany's top diplomat Sigmar Gabriel has cast doubt over UK Prime Minister May's plan to quit the EU and finalize a new trade deal within two years. Gabriel has said he wants Germany to maintain close ties with the UK. 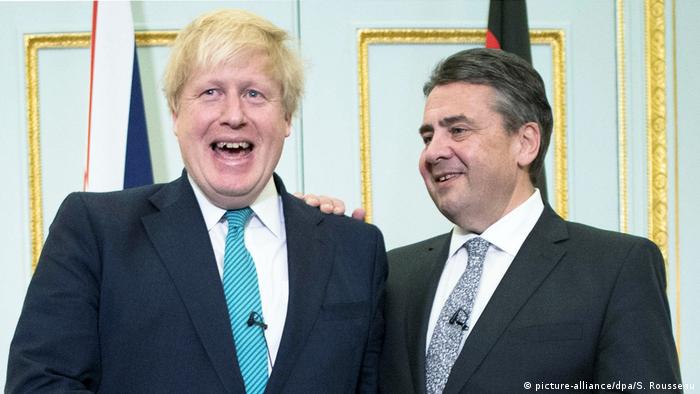 Germany's Foreign Minister Sigmar Gabriel said during a state visit to London on Tuesday that Britain's departure from the European Union would be like any divorce: "Complicated at first, but smoother as things progress."

However, speaking alongside his British counterpart, Boris Johnson, Gabriel tried to temper the UK's expectations ahead of negotiations with the EU, calling Prime Minister Theresa May's Brexit timetable "unrealistic."

May hopes to negotiate the UK's divorce from the EU and a future trade agreement with the bloc in tandem. Last week, EU Council President Donald Tusk said the bloc was open to trade discussions before the Brexit deadline, but stated that the two sides must make progress on Brexit before discussing a new trade deal.

Gabriel also warned of the dangers of failing to reach a Brexit deal within the two-year negotiating period.

"Having no deal is not the best idea for Britain and the European Union," he said. "But my personal opinion is that the burden for the Brits is higher than for the Europeans."

Following talks with Johnson, Gabriel tweeted that, although negotiations might prove to be difficult, long-term, close cooperation between the UK and EU was a necessity.

Gabriel: Good deal possible, but not as good as membership

Germany's foreign minister also said he was optimistic that the two would reach a good deal that was fair for all parties. However, he stressed no agreement would  offer Britain the same benefits of membership that it is relinquishing.

May triggered Article 50 of the Lisbon Treaty last week, beginning a two-year countdown to Brexit, nine months after Britons voted to quit the union in a divisive referendum vote.

The EU's Chief Brexit negotiator Michel Barnier  on Tuesday responded to the UK's angry reaction over Gibraltar after the bloc said last week that Spain would have a veto on extending any trade agreement to the overseas territory once the UK formally withdraws.

"Keep calm and negotiate," Barnier said to reporters in Luxembourg when asked what he would say to reassure London on the issue, playing on the popular British phrase that was used to motivate the populace during World War II.

Then when asked whether the territory located just off the Spanish south coast would remain under British sovereignty, Barnier said: "Legally speaking, Gibraltar will leave the European Union at the same time as the United Kingdom, that's what I can say."

On Sunday, former leader of the ruling Conservative Party Michael Howard said that May would "show the same resolve" as Margaret Thatcher did 35 years ago, when the then-Prime Minister declared war on Argentina after its forces invaded the Falkland Islands.