'The Swiss are smart enough to know that despite their universally respected sovereignty, they are dependent on their interaction with the world,' Schäuble said. Switzerland has a web of bilateral agreements with the EU. 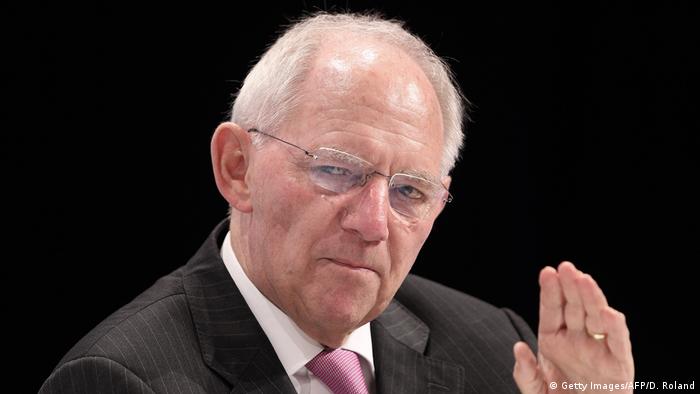 The Swiss parliament decided to give its citizens the first opportunity at available jobs. This goes around voters' demands for immigration caps and quotas.

May strikes a friendly note at Davos, despite 'hard Brexit' vision

After announcing a hard Brexit earlier this week, the British prime minister offered words of friendship in Davos. That wasn't enough to stop talk of a potential collapse of the European Union. (19.01.2017)

US President Trump will receive UK Prime Minister Theresa May on Friday in his first meeting with a foreign leader. He will also meet with Mexican President Pena Nieto, after insisting that Mexico pay for a border wall. (22.01.2017)

"The British should take as an example how cleverly Switzerland combines national sovereignty and close cooperation with the European Union," Schäuble told Swiss newspaper Neue Zürcher Zeitung (NZZ) in an interview published on Sunday.

"The Swiss are smart enough to know that despite their universally respected sovereignty, they are dependent on their interaction with the world."

Switzerland is not a member of the EU but contributes to its budget and has a series of bilateral agreements that are linked by a so-called "guillotine clause" – under which if one agreement is broken, they all collapse.

In 2014 that web of treaties was threatened by a referendum result that called for quotas on immigration from the EU. In the wake of Brexit, Brussels stood firm on the freedom of movement clause, and in December the Swiss parliament passed a hobbled version of the bill, which pushed businesses to look for workers already within Switzerland when filling vacant jobs.

Where will you get your plumbers?

Schäuble said with increased globalization of employment, the UK needed to draw part of its workforce from immigration.

"I told the English people, 'Where are you going to get all the plumbers if you exclude the Poles from your labor market? Then you won't get your pipes fixed,'" Schäuble said.

"The British government has to be told today that we are living in 2017. The world has changed and it will continue to change."

He advised Britain to move away from protectionist measures like those that US President Donald Trump has espoused.

"With all due respect, everyone agreed that we should move towards free trade. Long ago, Great Britain even started a war in China for free trade. And now this should no longer apply? Things are never as bad as they look."

"Brexit is bad in the long term for Great Britain. In the short run, the economy is currently doing well, but this is mainly because the pound has weakened. We know that countries that rely on devaluations of their currency are not successful in the long term."