Chanel's leading designer for 30 years, Karl Lagerfeld was a brand in his own right with an unmistakable look and outrageous comments. The German-born designer has died at the age of 85. 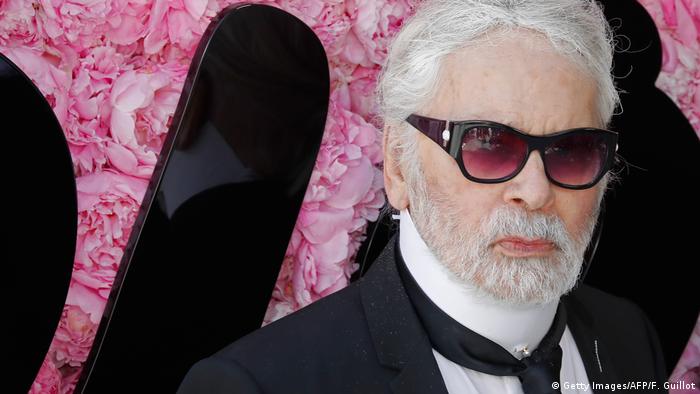 The French fashion house Chanel on Tuesday confirmed that the German-born designer Karl Lagerfeld had died at the age of 85.

Lagerfeld held a number of top jobs in the fashion world and had an almost unprecedented influence on the industry.

Karl Lagerfeld was born into a wealthy family on September 10, 1933. Young Karl and his sister lived with their mother and father, who was a canned milk manufacturer, in Hamburg's Blankenese district, home to aristocrats, pretty villas and well-kept parks.

All that changed for Lagerfeld when Hamburg was bombed in July 1944, as the family moved to their estate in Schleswig-Holstein. It was there, in the countryside, that he spent half of his childhood, though his urban origins, affinity for unusual clothing and his long hair made him stand out among the country kids.

Little Karl was quite unusual in other ways as well. Even before starting school, he learned English and French and spent hours up in the attic drawing. He preferred going to museums rather than to school, and was fascinated by French painters. "I loved everything that was French … that's where I wanted to go and that's why I learned French as a child," he told filmmaker Gero von Boehm in the 2014 documentary Deutschland, deine Künstler: Karl Lagerfeld (Germany, Your Artists: Karl Lagerfeld).

Paris: Paradise for a young designer

Over the years, the desire to move to Paris grew. After attending a Dior show in Hamburg in 1950, his mind was made up and in 1953 he and his mother moved to the fashion capital. He quickly made a name for himself: At just 20 years of age, he took first place in a fashion competition with a coat design. Yves Saint Laurent also participated, but only finished third.

Just a few years later, he was working with Pierre Balmain and Jean Patou. By 1963, he became artistic director for the first time. At Chloe he set trends himself, founding the Total Look in 1967, the unity of clothing and accessories. Fendi in Rome was also impressed with the young designer from Germany, hiring him in the mid-1960s for his fur and leather collection.

However, Paris retained a special place in Lagerfeld's life and legacy. Upon his death, Paris Mayor Anne Hidalgo said the designer "was not just an embodiment of Paris: he was Paris."

"His art gave color and shape to love, to refinement, to the astounding and the wonderful," she added in a series of condolence tweets.

By 1976, Lagerfeld had acquired his famous dandy look, complete with a distinctive 18th-century-inspired clothing style, ponytail, which he powdered himself, and the dark sunglasses that were his trademark up till his death.

Lagerfeld's landmark career move was in 1983 when then behind-the-times Chanel appointed him creative director. The designer was able to make the label appear more modern and appealing to young women, integrating new colors, modified cuts and other fabrics. Chanel without Lagerfeld? It now seems impossible.

But Lagerfeld was not content with Chanel alone. In 1984, he established his own label, aptly called Karl Lagerfeld, which offers everything from men's and women's fashion to children's clothes and accessories.

Yet fashion wasn't everything for Lagerfeld. A passionate reader and book collector, he also took photographs, created advertising campaigns, made short movies for various fashion companies, designed hotels around the world, founded a publishing company and established his own art gallery.

Immersing himself in work might be linked to having lost his life companion Jacques de Bascher to AIDS in 1989. But it was also typical of Lagerfeld to never be content with the status quo. "You might as well just throw in the towel if you're just going to rest on your laurels," he said dryly in the documentary Germany, Your Artists: Karl Lagerfeld.

She‘s the most famous cat on the globe. Her owner would even marry her if he could. Star model, e-cat and travel companion: Choupette is Karl Lagerfeld’s current source of inspiration. (14.04.2015)

The German fashion designer has criticized the "pastor's daughter" for opening Germany to "millions" of migrants. France's media regulator has launched a probe after he made the remarks on a popular French talk show. (14.11.2017)

Following two previous successful auctions, the third tranche of the fashion legend's estate will go under the hammer at Sotheby's newest auction house, in Cologne.

With guidance from Karl Lagerfeld, the shy German teen became an iconic 1990s supermodel. Beneath the glamor, Claudia Schiffer was lauded as a disciplined professional. The "Ice Queen" maintains her cool at 50.