As the SPD pulls ahead in the polls, leader Olaf Scholz was keen to flex his foreign policy muscles. He stressed the need for strong partnership with France to tackle the coronavirus pandemic and the climate crisis. 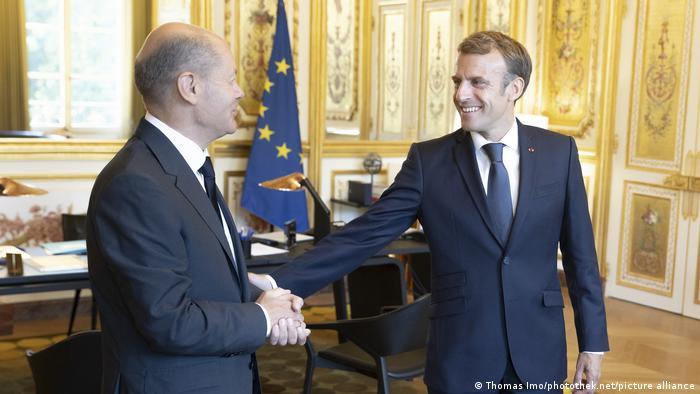 Olaf Scholz met with Emmanuel Macron at the Elysee in Paris

German Finance Minister and chancellor hopeful Olaf Scholz was in Paris on Monday, where he met with French President Emmanuel Macron in an effort to show off his diplomacy bona fides just a few weeks ahead of Germany's federal election.

As France and Germany are the two biggest economies within the European Union, a good relationship with Paris is seen as key for any German leader.

"The challenges of the coming decades require reliable partners," Scholz wrote on Twitter, adding that the two discussed working together to address the climate crisis and ending the pandemic. He repeated the suggestion that interested governments form an international "climate club," because "we cannot rely on industry" to follow the path of climate neutrality of its own accord.

Scholz also highlighted the need for close cooperation between Germany and France within the EU, especially when it came to defense policy.

A pragmatist: Scholz of the Social Democrats

How are the Social Democrats faring in the polls?

Scholz is hoping his center-left Social Democrats (SPD) can emerge as the strongest party in a new government when Germans head to the polls on September 26. For the past 16 years, the conservative Christian Democrats (CDU) have been the senior party in ruling coalitions under Chancellor Angela Merkel.

In previous election cycles, the SPD has struggled to define itself in opposition to the CDU, particularly as the two have ruled together with the SPD as the junior coalition partner since 2013.

However, in recent weeks the SPD has started polling ahead of the CDU for the first time in years.

This is due in part to Scholz campaigning in a style some analysts have compared to earlier successful CDU campaigns, highlighting that the candidate is both a pragmatist and a known quantity unlikely to rock the boat. The campaign recalls Merkel's 2013 slogan "You know me" and Germany's first postwar chancellor, Konrad Adenauer, famously declaring he would try "no experiments."

Others have also suggested that voters are not enthused about Merkel's successor as the head of the CDU, Armin Laschet, who is also due to visit Macron later this week.