A cold, drenching rain didn't deter about 200 people from showing up at the old market square in Stralsund, a small, Hanseatic city on Germany's Baltic coast. Hiding under umbrellas and inside ponchos, they came for one of the final events of an election campaign that has been anything but predictable.

The headliner was Armin Laschet, the embattled chancellor candidate hoping to keep his conservative Christian Democrats (CDU) in power. But the real star on Tuesday evening was the woman from whom he hopes to take the baton: Angela Merkel, the four-term chancellor who is stepping aside despite her unshakeable popularity.

The pair arrived about 20 minutes late. Security swept them through the crowd, entourage in tow, while the Black Eyed Peas' hit, "I Gotta Feeling" echoed off the square's restored medieval facades. The early-aughts dance-pop tune — from Merkel's first term — had to compete with unending boos and whistles coming from pandemic protesters just outside the roped-off event.

Staying on message: It's the economy

Merkel, who is also set to step down as the area's direct representative in the Bundestag, Germany's parliament, took the conditions in stride.

"When you're chancellor, you absolutely have to come back on a sunny day and in the daylight," Merkel said to Laschet as she kicked off her remarks from the mobile stage.

She quickly got down to business. Speaking for less than ten minutes, Merkel took credit for economic prosperity in the country and the region, which was part of the former East Germany and has had a lot of catching up to do since reunification in 1990.

"The next years will be about whether Germany, [the state] and this constituency are still connected to the best of the world," she said. "A chancellor Armin Laschet will continue to make sure of that."

Merkel has tried to keep a low profile in the campaign to replace her. Earlier this year, she told the political talk show "Anne Will" that the Union bloc, comprised of her CDU and its Bavarian sister party CSU, has "no claim to the chancellery" but would "offer the best ideas in the campaign."

That, polls consistently suggest, has not come to pass. The Union, which has ruled the German republic for five of its seven decades and is used to walking away with dominant pluralities of the vote, may suffer its worst-ever result on Sunday.

In a highly fragmented field, the CDU/CSU is now polling second — behind its current junior coalition partner, the center-left Social Democrats (SPD).

The risk of going into the opposition for the first time in 16 years has compelled Merkel to get more involved. Her conservatives hope the chancellor's popularity will boost the fortunes of Laschet, an ideological ally who currently serves as state premier of North Rhine-Westphalia, Germany’s most populous state. After a series of missteps in recent months, his favorability ratings are far behind those of the SPD's chancellor candidate, Olaf Scholz, who is now vice chancellor and finance minister under Merkel.

"I really don't know who I'm going to vote for. I'm a steadfast CDU supporter, but not of Laschet," Madeline Baron, a 23-year-old care worker from the small nearby city of Neubrandenburg, told DW.

Laschet also wasn't doing it for Marion Grzesik, a longtime CDU voter from Stralsund, but she found his performance at Sunday's debate convincing.

"It was a question mark for me, to be honest, because I didn't know Mr. Laschet very well," the 67-year-old retiree told DW. "But now having heard him, what he's said and articulated, that's convinced me." 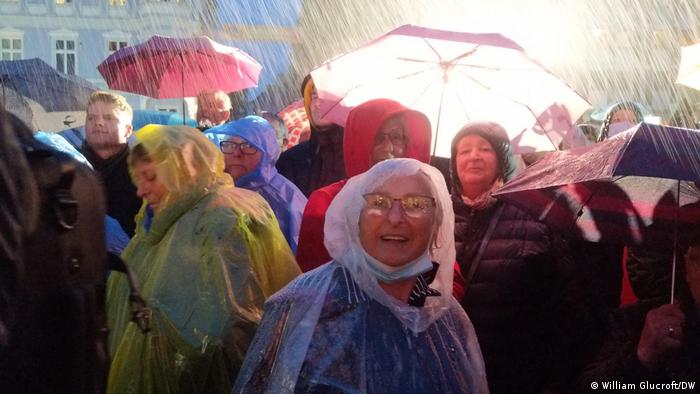 Amid applause and chants of "thank you, Merkel," the outgoing chancellor handed the microphone over to her would-be heir. Laschet picked up on her themes of economic stability and job security, and the tried to stir up concern at the prospect of a possible left-leaning coalition government bringing together the SPD, the socialist Left Party, and the Green Party, the latter of which is currently polling in third place.

"We have to do the right thing economically," he said. "That's why what the SPD, the Left and the Greens are planning is wrong."

Laschet pitted his party's plans to invest against his opponents' calls to raise taxes on the wealthy. His path towards climate neutrality is by working with German industry, he said, rather than through "ban politics," which is a common conservative talking point against the Greens.

The CDU-friendly crowd in a CDU-friendly city seemed largely convinced. One group of younger supporters chanted "Armin Laschet for chancellor," as the candidate's ten-minute speech came to a close.

But convincing voters beyond Tuesday's small event in Stralsund is a much bigger challenge, and it's unclear how much of Merkel's popularity is transferable.

"There's some truth to all the talk of a so-called social democratization of the CDU, which Merkel seems to have ushered in with modernization and shifting policies," Ursula Münch, the director of the Bavarian-based Academy for Political Education, told DW last week. "The party was able to attract different voter groups. These groups are not automatic CDU/CSU voters."

Since Germans don't vote directly for chancellor, some of them may not want to cast their ballot for the CDU/CSU to lead without Merkel at the helm. Though a centrist like her, Laschet has been criticized — including from within his own party — for distancing himself from Merkel and failing to connect with voters.

"Maybe she's also not so convinced by him," Anne Ehrich, a 71-year-old retiree from Hamburg, told DW. While on vacation in Stralsund on Tuesday, she and her husband stopped by the square for only one reason: To get a final glimpse of Merkel as chancellor.