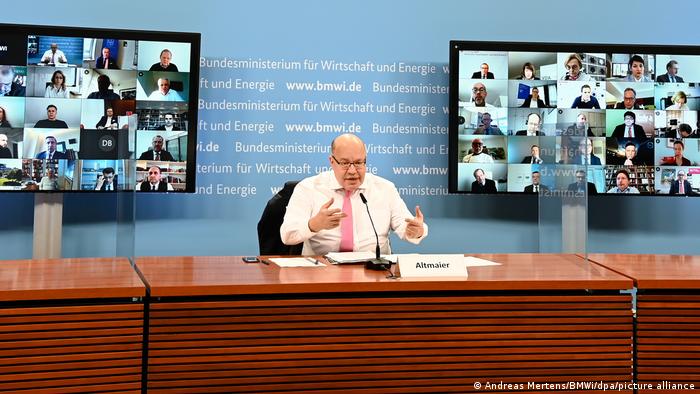 Economy Minister Peter Altmaier announced a slew of planned improvements to Germany's shutdown that would support businesses and self-employed people following a consultation with more than 40 business associations on Tuesday.

The minister, a member of German Chancellor Angela Merkel's Christian Democrats (CDU), revealed plans for a one-off payment of €7,500 ($9,080) to self-employed workers who have been hit hard by the pandemic shutdown.

He also said a "hardship fund" would ease some of the problems that certain businesses have had in accessing government financial support. Large companies with revenues of over €750 million would also be able to request interim aid.

A schedule for when different branches of the economy will be able to reopen would be discussed at the beginning of March at the next pandemic-related meeting between Germany's federal and state governments, Altmaier promised.

Germany's current shutdown is set to last until at least March 7, and politicians have made it clear that it is not likely to end then. They have, however, raised the prospect of a potential loosening of some restrictions, especially if variants do not spread widely in the country.

How did the business community react?

The president of the German Employers' Association (BDA) Rainer Dulger said after the consultations with Altmaier that a "comprehensive overall approach" for the entire country was still necessary.

He called for a road map using "evidence-based decisions," combined with a vaccination and testing strategy for a rapid start after the coronavirus restrictions begin to be lifted.

The German Retail Association (HDE) welcomed the inclusion of aid for large companies — something the association had been calling for "for months."

The president of the HDE, Josef Sanktjohanser, also said in a statement that "the political decision-makers must now ensure transparency with clear and understandable statements."

The German Travel Association called for a plan from the government on how and when the tourism industry would be able to get up and running again.

"We will have to live with coronavirus for a long time, despite the start of vaccinations," according to the association. "We finally need a political solution that permanently guarantees a maximum of public life, leisure and mobility with and despite it."

Launching a hotel in the coronavirus era

How did opposition parties react?

"Altmaier could have long ago presented a hardship fund and a concept for an opening perspective for the economy, instead of just announcing this today," Theurer said.

Klaus Ernst from the Left Party said the Economy Ministry had "failed" to set up structures in the summer to ensure the quick distribution of financial aid.

The Green economic expert Katharina Dröge also lamented the "meager" results of the consultation, calling the "minor adjustments" announced a disappointment and pointing out the absence of Finance Minister Olaf Scholz.