Germany's economy was hit hard by coronavirus, reporting a record slump earlier this year. But new GDP figures show the economy has rebounded. The government has also revised its year growth forecast upwards. 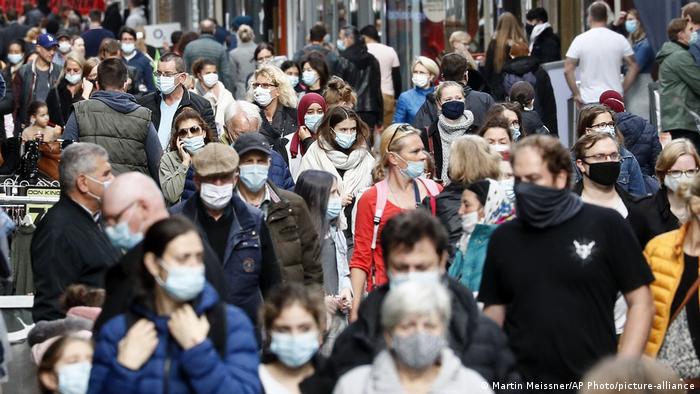 Germany's gross domestic product (GDP) grew by a record 8.2% from July to September compared to the second quarter, according to figures released by the Federal Statistical Office on Friday.

The figure was "far above expectations" of around 6.6% growth Economy Minister Peter Altmaier said.

The promising figure comes after Germany's economy contracted by a nearly unprecedented 10% quarter-on-quarter from  April to June.

The slump — one of the worst on record — was caused by strict coronavirus restrictions that saw businesses shuttered across the country and economic activity slow dramatically.

The bigger-than-expected rebound was driven by higher private consumption, increased investments in equipment and strong exports, the statistics office said.

The preliminary data did not include many details, but car companies and engineering associations have pointed to surprisingly strong demand from China in recent months.

The German economy is capable of "releasing growth forces" even under the conditions of the pandemic, Altmaier commented.

The government has also revised a full-year shrink in GDP from 5.8% forecast in September to 5.5%.

The improvement comes ahead of Germany reintroducing measures from Monday to curb rising COVID-19 infection rates that hit 18,000 new cases on Friday.

With restaurants and bars closed, just 0.4% growth has been forecast for the last quarter.

According to Altmaier, the new yearly forecast takes into account the impact of the upcoming round of restrictions.

The government plans to compensate companies affected by the lockdown by paying them up to 75% of their sales from last year's November. Finance Minister Olaf Scholz has earmarked €10 billion ($11.6 billion) for this new aid package.

Altmaier said officials expect the economy to have recovered from the impact of the pandemic by 2022.