The woman fell off a 4,000-feet (1,200-meter) high cliff trying to take a selfie in Sri Lanka. The tragedy is the latest in a string of deadly selfie attempts worldwide. 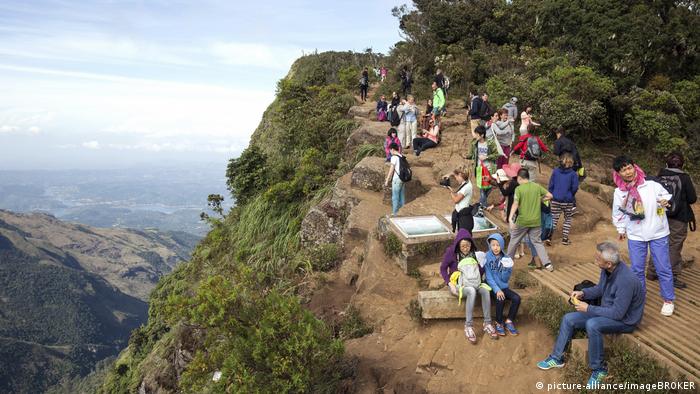 A German tourist died on Sunday after stumbling off a precipitous cliff in Sri Lanka while taking a photo of herself.

The 35-year-old woman was taking pictures with her friend when she fell off the World's End, a sheer cliff about 4,000 feet (1,200 meters) high.

The Sri Lankan army and volunteers recovered the body after a six-hour search involving air support and climbing.

World's End is located in Horton Plains National Park in central Sri Lanka and is one of the Indian Ocean island's biggest tourists attractions.

Read more: Celebrating the humble photo album in the age of the selfie

In 2015, a Dutch man on honeymoon with his wife fell off the World's End while taking a selfie and miraculously survived when a tree broke his fall 50 meters down the cliff.

A study published this year found there have 259 selfie-related deaths globally between 2011 and 2017.

In 2017, Sri Lankan authorities announced they would start arresting people taking selfies on train tracks after several deaths occurred as people tried to take the perfect picture in front of oncoming trains.

An Indonesian museum has taken down a wax sculpture of Nazi Germany leader Adolf Hitler after it sparked global outrage. The statue was a popular attraction for visitors who took selfies in front of the exhibit. (11.11.2017)

Tourists visiting a kangaroo hotspot in Sydney are finding the furry marsupials are not as cuddly as they might seem. Sightseers have been luring kangaroos with "junk food" to get the perfect kangaroo selfie. (02.05.2018)

From the self-portrait to the selfie in art

Self-portraits were not invented with the smartphone. See how the masters of self-portraits developed new representations of the artist throughout the centuries. (17.01.2018)