Dangerous trend: The train track selfie | Germany | News and in-depth reporting from Berlin and beyond | DW | 21.12.2015

A number of German teens - in particular young girls pledging each other eternal friendship - are taking selfies while posing on train tracks. This reckless pastime has forced the rail operator into a counter-campaign. 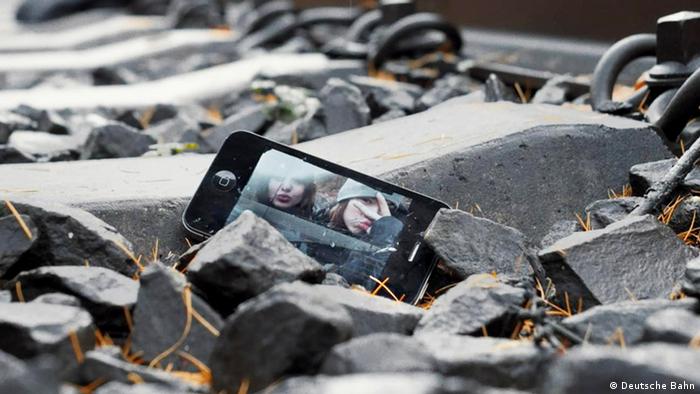 In reaction to what appears to be turning into a trend, Deutsche Bahn (DB) has launched a video on Youtube showing the lethal consequences of sauntering along railway tracks.

Girls aged 12 to 16 are particularly fond of striking the foolhardy poses: balancing along parallel tracks that disappear in the distance, holding hands, giggling and taking photos with their smartphones.

A click on the online photo and video sharing service Instagram using the search term "Gleis" or "Gleisen" (German for train track, and train tracks) shows many thousands of photos posted by young girls. Experts say that teenage girls enjoy cultivating an image, and are particularly active on social media.

Girls also tend to stage their friendships in a highly emotional manner.

Posing on or next to train tracks with their best friend is regarded as romantic, a symbol that they, like the parallel rails, will never part - it is fast gaining popularity.

"The girls are so engrossed in posing and taking pictures that they can easily forget their surroundings. They risk not hearing an approaching train until it is too late to react," said Frank Borchert, German Federal Police press spokesman. "It's totally dangerous," he told DW, pointing out that a train travelling at a speed of 160 km/h covers 100 meters in a little over two seconds.

Four young girls aged 16 or under have died since 2011 because they were caught by surprise by trains while taking selfies on the tracks, Borchert told DW.

The German railway company's blatant video warning of selfies on the tracks is part of the "Wir wollen, dass du sicher ankommst" (We want you to arrive safely) campaign: highly emotional videos that DB hopes will raise awareness of the various dangers people face on railway tracks.

One video portrays a group of teenagers driving at night, who think they'll make it across a train crossing just ahead of an approaching train - but they don't. Another shows the risks of climbing around near the overhead contact wires. 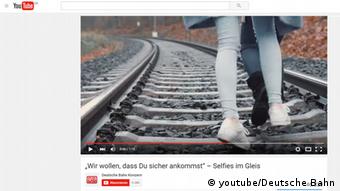 All in the name of eternal friendship

A DB spokeswoman told DW that it's important the target group notices the Youtube clip - a week after it was launched, it had almost 47,000 views - and takes it to heart. So far in 2015, she said, DB had recorded 84 deaths as a result of people illegally accessing railroad property, for instance by climbing on freight train carriages or taking shortcuts across the tracks.

Don't risk your life for a selfie

Authorities also warn kids from wearing headphones around trains. Earlier this year, a young boy was injured by a train as he was walking along the tracks between two platforms. He hadn't heard the train driver's warning horn. A man in Saxony-Anhalt was killed when crossing a train track wearing headphones because he didn't notice the approaching train.

Trespassing onto railroad property can cost a hefty fine of thousands of euros, and if it endangers DB operations, it could potentially be regarded as a criminal act punishable by jail. Apart from risking their lives, that's a high price for a selfie to immortalize friendship.

An Instagram photo rumored to be Pope Francis’s first-ever 'selfie' has tallied tens of thousands of likes. But is the photo too good to be true? (15.12.2015)

When do 'selfies' cross the line?

"Selfies" taken in front of a deadly building explosion in New York City are being criticized as insensitive. Do photographers need a "Selfie-quette?" (01.12.2015)

Selfies forbidden: Replace your smartphone with a pencil and a sketchbook

The Rijksmuseum in Amsterdam now encourages visitors to draw their works of art - instead of just taking a picture. Other museums all over the world have selfie sticks on their blacklist. (27.11.2015)