Germany's top DAX share index has risen to an all-time high during Tuesday trading. It also logged a close-of-trade high on Friday. Reduced interest rates, prompting savers to look to stocks instead, are a prime mover. 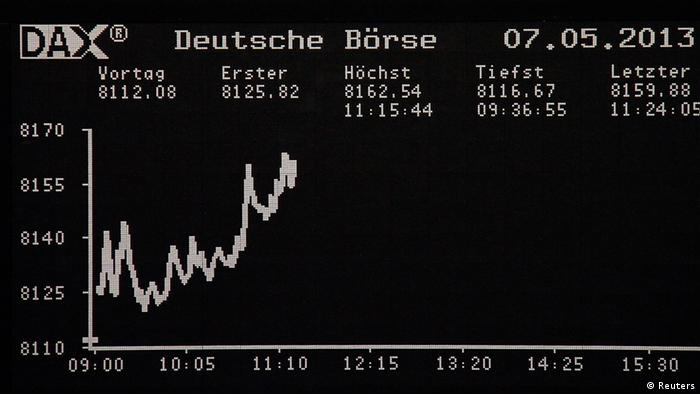 The major German index had been flirting with record territory for a few days, having logged a close-of-trade all-time record of 8,122.29 on Friday in Frankfurt.

One of the key factors pushing the index up was the European Central Bank's decision on Thursday to return to the record-low base interest rate of 0.5 percent, from 0.75 percent previously. As well as boosting confidence among businesses who hoped it might prompt banks to lend more readily, the move also nudged investors towards the markets.

The base interest reduction suggested that the already negligible returns on savings at the banks would remain low for the foreseeable future, prompting people to look to the stock markets for gains instead.

The German market, as with many around the world, took a big hit during the recession that followed the so-called financial crisis - often called the Great Recession - and has been fighting to return to its record levels set before the crash in the summer of 2007.

Markets around the world have been buoyant in recent weeks. Japan's Nikkei index on Tuesday topped the 14,000-mark for the first time in five years, the Dow Jones in the US has been flirting with the symbolic figure of 15,000 in recent days, while London's FTSE and Paris' Cac 40 were both in the green around the middle of trade on Tuesday.