Bundesliga sides Augsburg and Mainz suffered humiliating defeats to lower-league opposition, the latter against bitter derby rivals Kaiserslautern. There were no such issues for Schalke, whose fans sent a clear message. 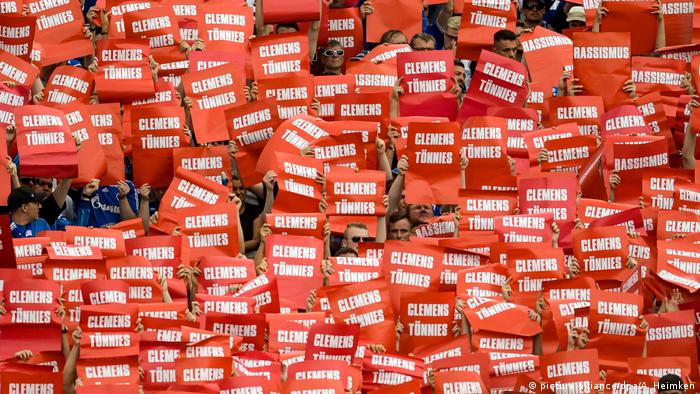 Schalke avoided an embarrassing cup upset against fifth-division SV Drochtersen/Assel, but their fans used the first-round fixture to embarrass club chairman Clemens Tönnies, who has temporarily stepped down in the wake of a racism scandal.

After making a racist remark about Africans, Tönnies announced he would be stepping down for three months – a decision which prompted nationwide criticism from those who felt that the 63-year-old Schalke legend was getting away too lightly, including the club's own fans.

Ahead of the cup tie, Schalke's travelling supporters held up red cards behind a large red banner which read: "We're showing racism the red card!" The word "racism" was then replaced by the name "Tönnies," as the fans made their position clear.

Eariler in the week, the Ultras Gelsenkirchen had released a statement in which they criticized the club's honorary board's decision to merely suspend Tönnies, saying: "Once again, it seems that a single person is bigger than our entire club. The decision of the honorary board is absolutely unacceptable for us!"

- Opinion: In Tönnies case, Schalke are trampling on their own mission statement 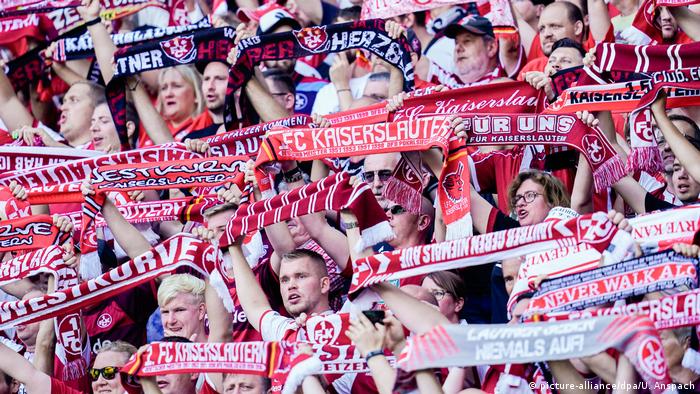 Mainz had a derby day to forget as they were dumped out of the cup by neighbors Kaiserslautern, former Bundesliga winners in 1997 but now languishing in the third division.

In the first Rhineland-Palatinate derby since the two rivals met in the top flight in 2012, second-half goals from Manfred Starke (a controversial penalty) and captain Florian Pick (in injury time), condemned the Bundesliga side to a humiliating defeat at the iconic Fritz-Walter-Stadion.

But it could yet get worse for Mainz who are likely to be handed hefty fines after their supporters set off flares time and again throughout the match, and even threw them onto the pitch following the second goal.

An even bigger cup upset occurred in the Rhineland where fourth-tier side SC Verl hung on to eliminate top-flight Augsburg, who have now fallen at the first hurdle for the second time in three years.

The Regional League West outfit took an early lead after Augsburg's Marek Suchy inadvertently deflected the ball into his own net, before Ron Schallenberg doubled Verl's lead before half-time.

Andre Hahn scored a late penalty to give Augsburg hope but it was too little, too late for Martin Schmidt's side. "Huge compliment to Verl who deserved to win today," said the Swiss coach. "They didn't just have a great mentality; they also found good footballing solutions and played very well."

Augsburg begin their Bundesliga campaign away at Borussia Dortmund next Saturday … 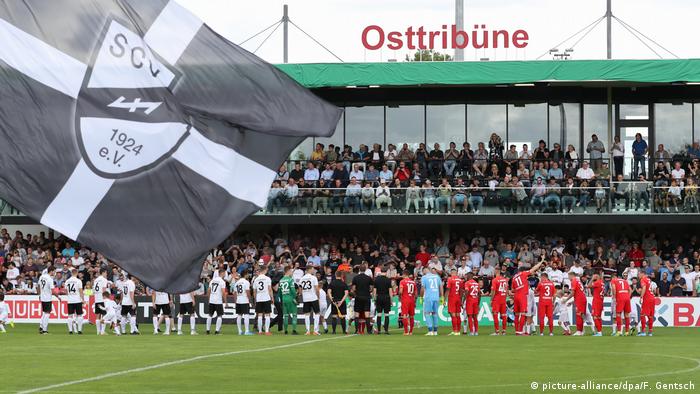 Bundesliga side Augsburg were knocked out by fourth-division SC Verl

Freiburg and Düsseldorf scrape through, easy for Leverkusen

Elsewhere, other Bundesliga representatives avoided slipping on any banana skins, although some made harder work of it than others.

Fortuna Düsseldorf needed extra-time to see off fifth-division Villingen, Rouwen Hennings scoring arguably the goal of the afternoon with a delicious back-heeled shot which went in off the bar as Fortuna eventually won 3-1 against ten amateur players. In a scrappy encounter, Freiburg beat Magdeburg 1-0 thanks to an extra-time strike from Luca Waldschmidt.

There were no such problems for Bayer Leverkusen however as Peter Bosz's team made saw off Alemannia Aachen of the fourth tier by four goals to one. Kevin Volland, Leon Bailey and Kai Havertz were all on the scoresheet after an own goal had given the Werkself an early lead.

Meanwhile, second-division Dynamo Dresden eventually ran out 3-0 winners against TuS Dassendorf in a curious game which the fifth-tier outfit playing a "home" fixture over 500 kilometers away in Zwickau, just down the road from Dresden.