German Cup: Marco Reus back with a bang as Dortmund steamroll Duisburg

Borussia Dortmund's Marco Reus marked his first game in 223 days with the fifth and final goal in their demolition of Duisburg. He scored seconds after coming on, with new recruit Jude Bellingham also scoring, on debut. 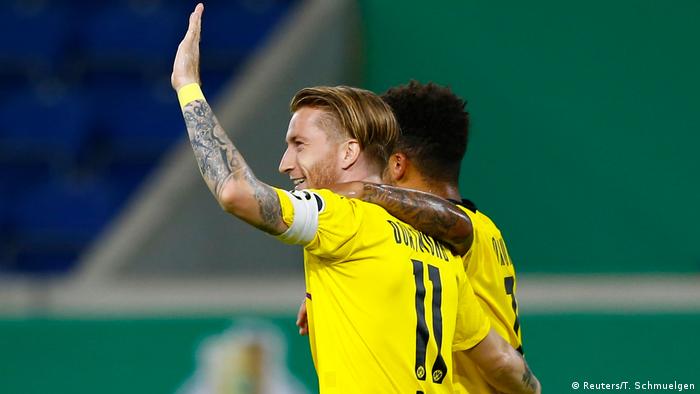 The last game Marco Reus played in black and yellow was a German Cup defeat by Werder Bremen on February 4. Since then, we've seen a global pandemic and a treble for Bayern Munich — it's been a while but Marco Reus is finally back on the field and back in the goals to give Dortmund a timely boost.

Once again his lengthy layoff — this time because of a persistent adductor problem — makes his return feel like a new signing again for Dortmund. He was only a substitute in Duisburg and by the time he entered the fray, the result was already decided.

Goals from English duo Jadon Sancho, from the penalty spot, and Jude Bellingham were added to by a sublime freekick by Thorgan Hazard and another freekick by Gio Reyna, with his shot taking a deflection on the way through. A red card for Duisburg center back Dominic Volkmer didn't help the home side's cause.

So the pressure was off Reus. But that didn't stop the 31-year-old from looking as sharp, hungry and ruthless as he always is. His goal came just moments after coming off the bench and his first touch of the ball was to control the ball, and his second was to put it beyond Duisburg keeper Leo Weinkauf. 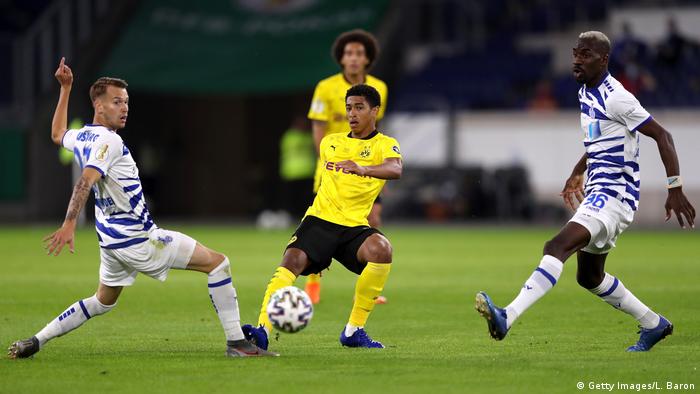 He had only been on the field for a matter of seconds but he was back with a bang and, with Dortmund hosting Reus‘ former club Borussia Mönchengladbach in a tricky Bundesliga opener this Saturday, it was a timely reminder of Reus‘ quality and the potentially devastating forward line coach Lucien Favre may be able to deploy this season. Dortmund fans will be salivating at the thought of Reus joining Sancho, Erling Haaland, with Reyna, Hazard among the support acts.

Duisburg were never in the game and it was almost a carbon copy of their 5-1 friendly defeat on this ground by Dortmund three weeks ago. The only difference was the inclusion of a handful of home fans, socially distanced and masked, as German football makes tentative first steps towards returning fans to its stadia.

Elsewhere, there were a couple of surprise results, not least newly-promoted Bundesliga side Arminia Bielefeld slipping to a 1-0 defeat at fourth-tier club Rot-Weiss Essen, following a first half strike by Simon Engelmann.

In Daniel Thioune's first game since taking over as Hamburg coach, they were hammered 4-1 by third-tier Dynamo Dresden. There were ugly scenes at the end of game in Dresden, which saw a few hundred fans present in the stadium, as Hamburg player Toni Leister climbed into the stands to physically confront a Dresden fan, whom Leister claims insulted him.

In other  game on Monday, Hanover survived an injury time fightback by Würzburger Kickers to win 3-2.