Daniel Thioune being made head coach of Hamburg is a big deal. Not just because the 45-year-old is a pioneer for Black coaches, but because Hamburg is a place where most coaches' careers are ended — not started. 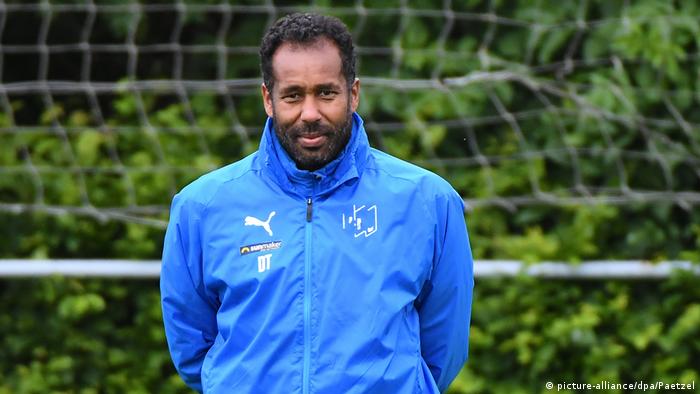 It is easy to forget with all of the recent sporting issues that Hamburger Sport-Verein (HSV) are one of the biggest clubs in Germany. The former European Cup winners and six-time German champions have an enormous fan base and, with nearly 60,000 capacity, one of the biggest stadiums in the land. They are perhaps the biggest sleeping giant in German football today.

That Hamburg fired Dieter Hecking and appointed a new head coach after failing to win promotion back to the Bundesliga is no surprise — such is the consistency of the club's turmoil in recent years. However, the appointment of Daniel Thioune is a groundbreaking moment of history in German football.

Diversity not just in words

A German-born Black man in charge of HSV matters. It matters in a country where racism remains an issue and where Black coaches are still rare. Thioune told German football magazine 11 Freunde in September 2019 that while he knew the color of his skin would not make life easier for him, he also knew it would not stop him from achieving. Already, that much is clear and while Thioune's opportunity at Hamburg comes as a result of his ability as a coach not his skin color, the appointment remains an example of diversity in action rather than in conversation.

Were he to be the coach to take Hamburg back to the top flight, it would be a seismic achievement. Not just because of the color of Thioune's skin, but also because Thioune will have succeeded at a club where so many other young, talented coaches have failed. The weight of Hamburg's history and the power of the board and investors have been the undoing of so many promising names, such as Hannes Wolf, Christian Titz and even Bruno Labbadia. This club comes with baggage.

"I've learned that in life every step must be taken and sometimes each one takes longer… It showed me that even when the road is a little bumpy, I can still take it," Thioune told DW in a 2019 interview.

Perhaps that is going to change, though. Jonas Boldt, Hamburg's chairman of sport and former Leverkusen sporting director, has made it clear that club is moving into an era of developing from within.

"The financial means have not improved, and so we need to find other and creative solutions," Boldt said recently about squad planning.

The club's decision to focus on development may well be a decision made more out of necessity than choice, but it could be exactly what Hamburg need to avoid further embarrassment and to make their fourth head coach in the last two years the right one.

Knowing Hamburg though, that might be wishful thinking. Many have come with grand plans and most have left with their heads bowed in defeat – and HSV in the same state of instability they found the club in. Thioune though, might actually be different.

In German, the word Menschenfänger is often used to describe people whose belief and drive are so strong that others are caught up in them and want to follow. Jürgen Klopp is the man most often associated with this term, but there are others – and Thioune is one of them.

At his opening press conference with HSV, he spoke of humility, empathy, a willingness to learn from mistakes and how "it's about work not talk." This all sounds very generic, but Thioune's record shows it to be true. His language reflects his work, and combined with an effective and successful style of play, this can make a difference.

With Hamburg's ill-timed end of season collapse costing them the chance of promotion, it is clear that much is wrong with the mindset of the club. Thioune arrives having guided an Osnabrück side working with modest means to promotion and then a stable mid-table finish. Most impressively though, in that promotion run he generated a confidence in his team that was unerring. 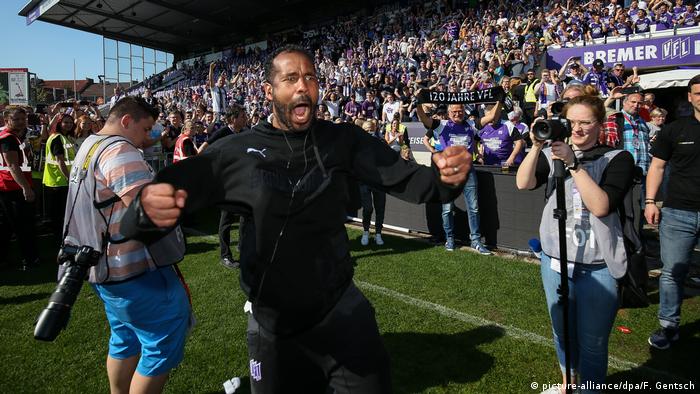 In the first half of the promotion year, Osnabrück avoided defeat after going a goal down seven times, going on to win most of those games. Down the stretch, they secured promotion and the third-division title before the end of the season thanks to a remarkable run of seven straight wins. Thioune's ability to adapt in-game bodes well, as does his relationship with 29-year-old assistant coach Merlin Polzin, who leaves Osnabrück to join HSV with him. Polzin has been heralded as the latest, young coaching mastermind in Germany.

On the pitch, the pair will bring a more vertical style of football than has been on show in Hamburg in recent years. Thioune stressed at his first press conference as HSV head coach the importance of "working brutally hard against the ball." Both pose intriguing questions about the current squad and the players Hamburg may recruit in the future.

Thioune won't have to wait too long to stand on the sidelines again. When he does, he might glance at the tattoo on his left forearm that includes a quote from the film 'The Pursuit of Happiness': "Don't ever let some­body tell you, you can't do some­thing."

As a Black man who grew up in Germany, who made it into professional football through amateur leagues and not an academy, who became a first-team coach after years of work at the youth level, to now be the head coach of Hamburg is proof that Thioune has overcome more than most. Why shouldn't he be the one to overcome the Hamburg hurdle?