Borussia Dortmund fell at the hands of Werder Bremen in the German Cup for the second consecutive season. Erling Haaland was on the scoresheet again, but the result highlighted BVB's dependence on the 19-year-old. 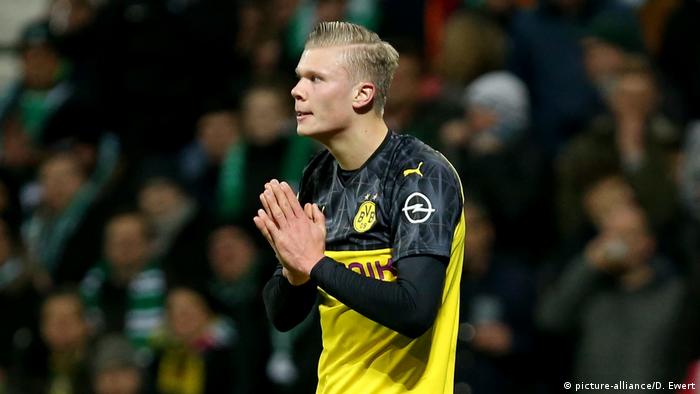 Erling Haaland has been a revelation for Borussia Dortmund since joining from Red Bull Salzburg in January, scoring seven goals in his first three Bundesliga games.

But it wasn't a surprise when BVB coach Lucien Favre didn't include the Norwegian striker in his starting lineup when his side took on Werder Bremen in the German Cup round of 16 on Tuesday.

The 1.94-meter (6-foot-4) Haaland has called Dortmund home for a little more than a month. His acclimation to his new team has only just begun.

But Dortmund's 3-2 loss in Bremen, their second cup elimination at Werder's hands in as many seasons, once again showed how reliant their attack has become on the 19-year-old goalscorer.

Dortmund's first half against Bremen was what ultimately cost them a place in the German Cup quarterfinals.

Though they out-possessed and out-passed their hosts, Dortmund couldn't find the killer touch. Midfielder Julian Brandt's statistics were a case in point: he played seven key passes but misplaced 10 more.

"The first half wasn't good," Brandt told German broadcaster ARD afterwards. "We had more possession, but we didn't do much with it." 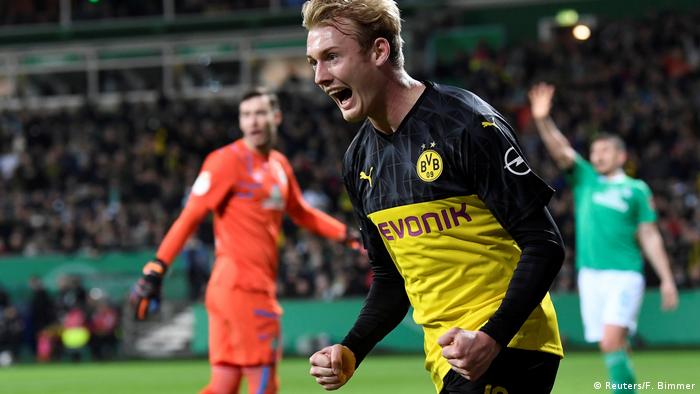 Bremen's first goal ultimately came from a weak clearance by Achraf Hakimi and a poor attempted tackle from Brandt. Milot Rashica fired a shot off the gloves of goalkeeper Marwin Hitz before Davie Selke slotted home the rebound. A thunderous strike from Leonardo Bittencourt 14 minutes later saw the visitors facing a 2-0 deficit after a half an hour, a scoreline that would hold until halftime.

Dortmund were in the same situation as in their 2020 opener against Augsburg, trailing 2-0 at the break after a disappointing first half. They were similarly ineffective against the Bavarians, creating fewer chances despite seeing more of the ball.

In Augsburg, Favre turned to Haaland for a spark off the bench, and the Norwegian responded with a 20-minute hat trick. The Swiss coach turned to his teenage goal machine on Tuesday in Bremen, bringing him on in place of an ineffective Thorgan Hazard at halftime.

Dortmund came alive when the teenage striker checked in. After just seven shots in the first half, only one of which was on goal, BVB tallied 14 shots, including six on target. Haaland put Dortmund within one with just over 20 minutes to play, but unlike in Augsburg, his heroics weren't enough to get Dortmund over the line.

Rashica restored Bremen's two-goal lead with a terrific run and finish. The first professional goal from 17-year-old American Giovanni Reyna brought the away side back within one with 12 minutes to play.

Haaland nearly sent the game to extra time with a stoppage-time header that Jiri Pavlenka forced over the bar. In the end, the home side were celebrating the upset, and Dortmund were left contemplating another shocking cup exit. 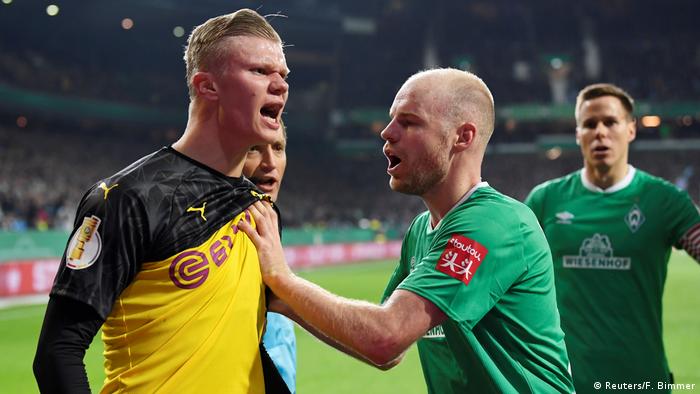 Before the 2019-20 campaign, some thought Dortmund had the potential to end Bayern Munich's streak of seven consecutive league championships. The reality appeared different early on as BVB struggled to find consistency in the first half the season.

In second place after four games — one of which was a shocking 3-1 loss to newly promoted Union Berlin — the Black and Yellows fell to seventh in the Bundesliga table after three consecutive 2-2 draws. A 4-0 loss to Bayern Munich raised questions as to whether Favre was the right man to lead the team forward, but his side recovered enough to finish the first half of the season in the top four.

Dortmund started the new year with three consecutive Bundesliga wins in which they scored five goals. The stretch signified a possible turning of the corner, even if the results came against Augsburg, Cologne and Union, all teams in the bottom half of the standings.

But Tuesday's elimination from the German Cup seems to indicate that Dortmund may not be as close to steadying the ship as initially thought. They could be the same up-and-down side from the first half of the season, just with a budding teenage star that can occasionally bail them out.

Sancho and Haaland: The centerpieces of Dortmund's high-end shop window

Borussia Dortmund's Jadon Sancho and Erling Haaland both look destined to make it to the very top. They aren't the first to hone their talent at BVB and the club need to make the most of them while they can. (02.02.2020)

Erling Haaland’s sensational arrival has masked Borussia Dortmund’s defensive issues. In German international Emre Can, BVB are hoping for more stability at the back. (01.02.2020)