Bayern Munich have beaten Werder Bremen in a spectacular cup semifinal, with more than a little help from a late refereeing decision. The 3-2 victory sets up a final against RB Leipzig next month. 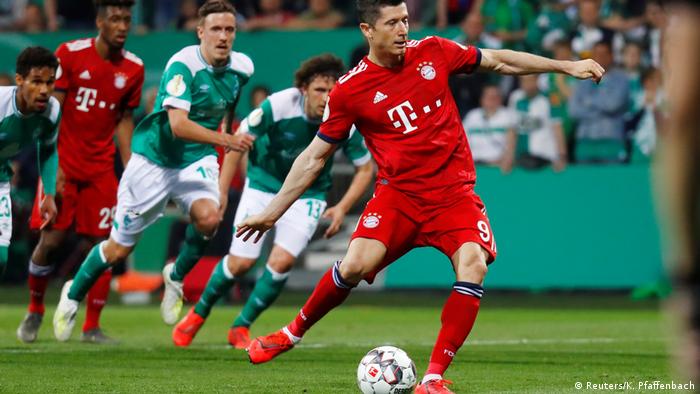 Spare a thought for Werder Bremen's supporters this evening. In the space of five minutes late in the second German Cup semifinal, they went from despair, to hope, to euphoria, before reverting to fury at the match officials.

Trailing 2-0 with 15 minutes remaining the match seemed as good as over. But Bremen scored two in two minutes to level the score and reignite the home support, with the hosts' strongest player Milot Rashica setting up the first for Yuya Osako and scoring the second himself. 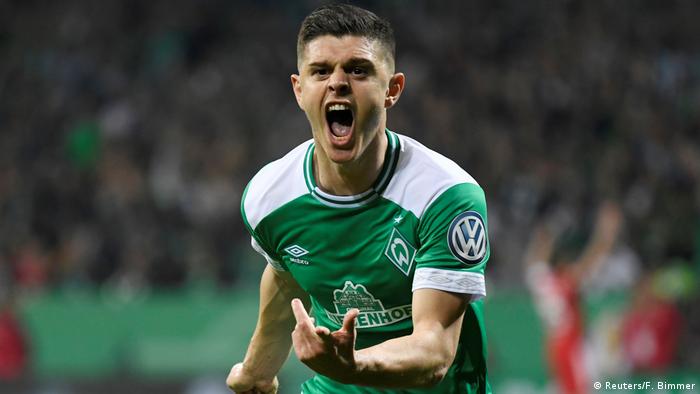 Moments later, though, Kingsley Coman and Theodor Gebre Selassie collided in Bremen's penalty area. Even though the contact was minimal, and the ball appeared destined for Bremen keeper Jiri Pavlenka's gloves no matter what happened, referee Daniel Siebert signaled for a penalty. The call was not deemed contentious enough to warrant a review using VAR.

"That was risible," Bremen captain Max Kruse told ARD after the game. "If that's a penalty, then why bother with VAR? ... I don't want to say too much more."

The favorites were able to retain their lead this time, booking a spot in their 23rd German Cup final. RB Leipzig await the Bavarians, seeking their first top-level trophy against the 18-time cup winners. 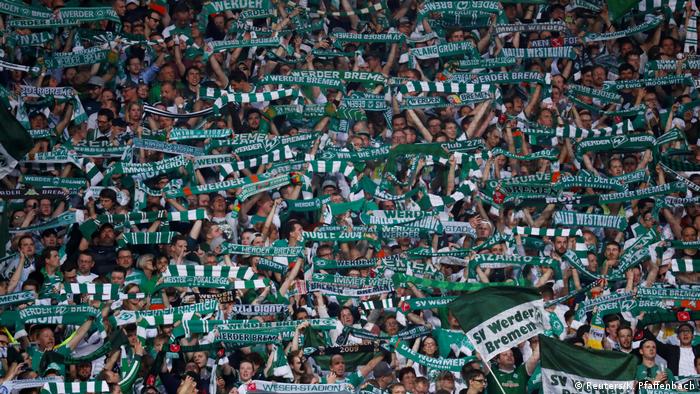 Bremen's fans put on quite a show, as their 37-game unbeaten home run in the Cup came to an end

90+7' Ref Daniel Siebert blows his whistle one last time. Bayern are through to their 23rd German Cup final. Bremen's fans will be distraught at the comeback that never was.

90+3' Lewandowski rounds the entire Bremen defense, including goalie Pavlenka, and shoots against the post from about a meter out! That should have nailed the coffin shut.

90+1' Claudio Pizarro unmarked at the back post for Bremen, but he heads it over the bar! Fairy tale writers, get back in your boxes.

86' Tempers are raw in the closing minutes after that contentious call. Bayern enjoying a period of possession and trying to take the sting out of the game.

78' Penalty for Bayern! Gebre Selassie brings Coman down in the box. Bit soft, and the ball was running through to Pavlenka, but there was contact.

75' GOAL! Milot Rashica! They're level! The Kosovar playmaker breaks away down the right and fires a low shot past Ulreich and in off the post. The Weser-Stadion, still rocking from Osako's goal, goes bananas.

74' GOAL! Yuya Osako. Bremen pull one back! Good work in the box from Rashica, firing a low cross across Bayern's bows. Osako is on hand to finish.

68' Old-boy alert! Claudio Pizarro comes off the bench for Bremen. That would make some story.

64' Klaasen clatters Ulreich's crossbar. Bremen nearly get right back in the action.

63' GOAL! Thomas Müller. Leon Goretzka tries a shot from range but scuffs it. The ball couldn't have been better for Thomas Müller, waiting in the box, though. He brings it under control and finishes with his right past Pavlenka. No way back now for Bremen?

58' Thomas Müller pulls the trigger from range, but the ball keeps on rising.

57' Sub Bayern: Serge Gnabry makes way for Leon Goretzka. A fairly defensive move on paper, but Bayern hardly lack firepower and Goretzka's been known to contribute in attack from time to time!

50' Bremen have started the second half with real purpose. Bodes well.

HT analysis: Bremen kept their opponents honest for most of the half, displaying incisive passing and some pretty aggressive tackles, with the crowd playing its part as well. Nevertheless, Bayern's quality was on show early and late in the first period. Thomas Müller's cheeky early effort was the first shot across Bremen's bows, and Bayern could have taken the lead around half an hour in if only David Alaba had a right foot. The goal did feel like it was due when it came.

45' Max Kruse misses at the other end. His shot was deflected by Martinez and then gobbled up by Ulreich.

43' Gnabry fires over the bar from range with his left. Bremen just need to make it to the break without taking any more damage.

41' Disallowed goal, Thomas Müller. Period of real pressure from Bayern since taking the lead. Müller's cross from the left actually curled in all by itself. But Robert Lewandowski, who was offside, leapt for the header and disrupted Pavlenka's line of sight; so it's called back for offside. 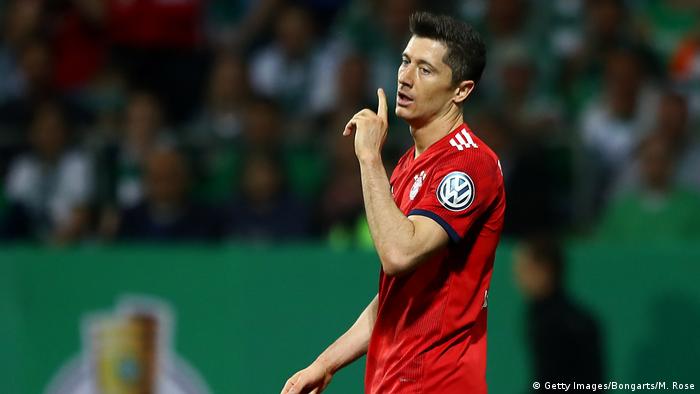 36' GOAL! Robert Lewandowski. A bizarre way to open the scoring. A Thomas Müller header loops over Pavlenka towards the far post, hits the post and bounces back into Lewandowski's path. He prods it home from point blank. Bremen's defense and goalie wrongfooted first by Müller's header and then by its deflection back off the post.

35' Kingsley Coman cuts inside from the left for Bayern and rifles a shot wide of Pavlenka's post.

32' The hosts are putting up quite a fight here. Strong in the tackle, purposeful on the ball, buoyed by a very lively crowd.

29' After a couple of Bremen corners, Bayern break away at speed, but can't find a shot at the end of it. Extremely important sliding tackle from Sahin to prevent an attempted shot when the Bavarians did find an angle.

27' Mats Hummels joins Klaassen in the book. Studs-up challenge on Rajica, who's been very lively.

25' Werder's Davy Klaassen goes in the book for a late sliding challenge on Kimmich. Hard to argue with that.

19' Yuya Osako fires a shot wide of Sven Ulreich's post. Lots of chances at either end, but neither keeper has had to sing for their supper yet.

16' Müller again, arriving in the middle to meet a cross from Coman. Deflected wide for a corner. Bayern having a lot of joy down the left flank.

10' Thomas Müller misses a left-footed back-heel by inches, after David Alaba got to the byline to cross in low. Truly cheeky effort.

8' Chance for Bremen on the break after Lewandowski gave the ball away cheaply. Cross to Rashica at far post, he nods it down for Max Kruse, who doesn't make proper contact with the ball. Home fans on song after a strong start for the underdogs.

4' Some really fiery tackles in the opening minutes. Jerome Boateng tackles Rashica from behind and collects him in the process. Just a talking-to from the referee Daniel Siebert, no early card.

2' Bremen with the first promising attack, as Milot Rashica goes on a mazy dribble in Bayern's half. No end product though.

— Kruse and Müller gather in the center circle for the coin toss. Kick off just moments away now. 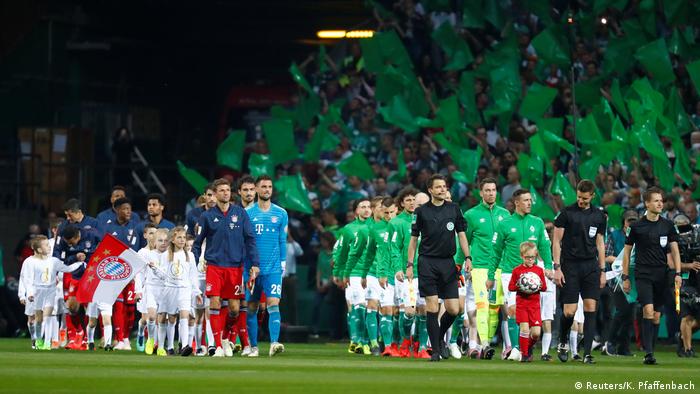 The two teams take to the pitch

— Are you a Bayern supporter wondering which reason for optimism you'll plump for tonight? Well... Kovac's crew have lost just one game this calendar year against German opposition. (Liverpool and Jürgen Klopp send their regards as well!)

— Are you a Bremen supporter desperately seeking reasons to be optimistic? Well... Werder are on a remarkable home run in the German Cup; they're unbeaten in 37 home games in the DFB-Pokal. Number 38 may prove the toughest, though.

— Pascal Jochem and Janek Speight are on hand for us in Bremen this evening.

— Jeers from the home fans as Bayern's players step out of the tunnel to warm up...

— This game pits the two most successful clubs in the history of the competition against each other. Bremen have won the trophy six times, while Bayern have won it 18 times. Perhaps more impressive still, the Bavarians have only ever lost four finals.

— Bayern Munich have gone for experience at the center of defense — Hummels and Boateng both start — but youthful exuberance on the flanks with Kingsley Coman and Serge Gnabry both starting. Thomas Müller gets the nod over James Rodriguez, with Robert Lewandowski leading the line, of course.

— Let's kick off with some team news. Japan's Yuya Osako is back in the first team for Werder Bremen, who will also be looking to captain Max Kruse for a spark in attack. Keeper Jiri Pavlenka was on fine form at the weekend against Bayern; he's liable to be busy once more this evening.

— Hello and welcome to our live updates on the second German Cup semifinal. Bayern and Bremen met just days ago in the Bundesliga, with the Bavarians grinding out a 1-0 win thanks to a deflected long shot from Niklas Süle. Now, with Bremen on home soil, the two teams will battle for a May 25 ticket to Berlin for the DFB-Pokal final, against RB Leipzig.