Jürgen Rudloff used to be the proud face of legal sex work in Germany. Now, prosecutors have charged him with illegally obtaining funds from investors and procuring women from trafficking gangs. 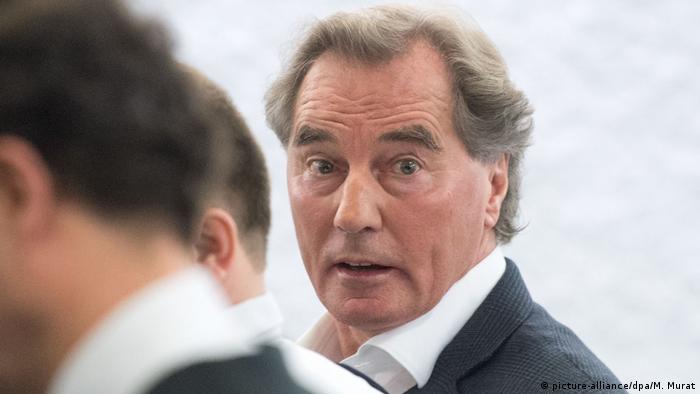 The owner of a Stuttgart brothel appeared in court on Friday over charges of pimping and human trafficking to the tune of millions of euros. Proprietor Jürgen Rudloff denies the allegations.

Rudloff owns the Paradise brothel in Stuttgart, as well as several other red light district establishments in Frankfurt, Saarbrücken and the Austrian city of Graz. At one time, Rudloff loved to show off his business acumen — appearing on chat show couches and giving press interviews about how legal prostitution in Germany stayed profitable and above board under business models such as his.

That business model, according to Rudloff, was a 5,800-square-meter "Men's Wellness Oasis," which visitors paid between €70 and €80 to enter and be entertained by the women on the ground floor, according the Stuttgarter Zeitung newspaper.

If the men wanted to go with the women to their rooms, said Rudloff, they had to pay the sex workers themselves. He had nothing to do with it — the women rented their own space in his brothel.

But state prosecutors in Stuttgart disagree. They say Rudloff was procuring women illegally from gangs. On top of that, he is accused of defrauding his investors. Authorities claim that he received at least €3 million ($3.7 million) from financial backers, ostensibly to open new brothels, but instead used the money to fund his lavish lifestyle.

The investigation into Rudloff's business dealings resulted in 11 arrests in 2014. Rudloff is said to have fled to Switzerland, and was arrested when he voluntarily returned to Germany in September 2017.

Prosecutors have said they expect a lengthy trial, which is scheduled to go on until at least March 2019. The case has renewed debate about prostitution in Germany. The practice has long been legal in Germany in regulated brothels, something proponents say is good for the health and safety of sex workers. However, detractors are usually quick to point out that the system lends itself to women being trafficked from Eastern Europe and elsewhere after being promised dancing and waitressing jobs in Germany.

Under new rules for the oldest profession, prostitutes in Germany required to register themselves. However, authorities in the city of Hamburg believe only a fraction there have done so. (13.01.2018)