​​​​​​​The memorial event marks the first time ever that Israeli fighter jets have performed such an exercise on German soil. The Luftwaffe chief has called the joint operation "a sign of our friendship today." 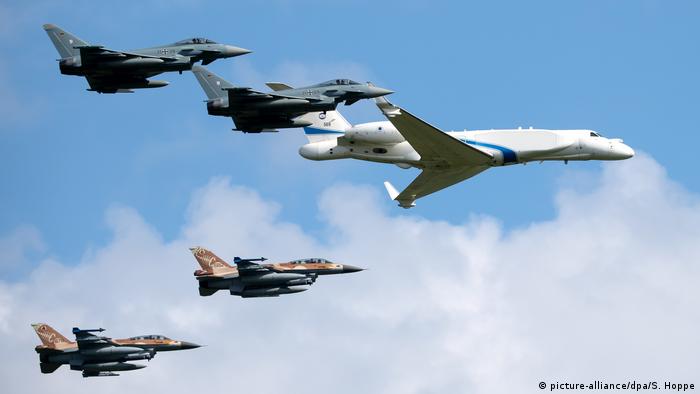 The symbolic event was the first time ever that Israeli airforces have trained in Germany and is part of a two-week program of manoeuvres.

Aircraft, including Israeli Air Force F-16s and Eurofighter jets from the German Luftwaffe, also flew over the nearby Fürstenfeldbruck airbase to commemorate the massacre at the 1972 Munich Olympics that left 11 Israeli athletes, and one German policeman, dead.

It is the only training exercise the IAF is carrying out abroad this year due to the coronavirus pandemic.

Luftwaffe chief Ingo Gerhartz described the joint effort as "a sign of our friendship today."

He said in an official statement that it was also a reminder that Germany has a responsibility "to fight anti-Semitism with the utmost consistency" because of its Nazi history.

Over 200,000 people from across Europe were imprisoned at the Dachau concentration camp, some 25 kilometers to the north of Munich, during World War II. Roughly 41,500 people lost their lives at the camp.

The Israeli jets arrived at the Nörvenich airbase near the western German city of Cologne on Monday. "The six F-16 aircraft are taking part in the BlueWings2020 and MAGDAYs exercises over the next two weeks," the German Air Force said on Twitter.

Israeli and German fighter jets have performed a first ever joint flyover at Dachau concentration camp to honor Holocaust victims. DW spoke with Israel's ambassador to Germany, who was on site for the occasion.