The ruling party candidate and former Georgian foreign minister has become the last president to be voted in by the electorate. From 2024, the president will be chosen by an electoral college. 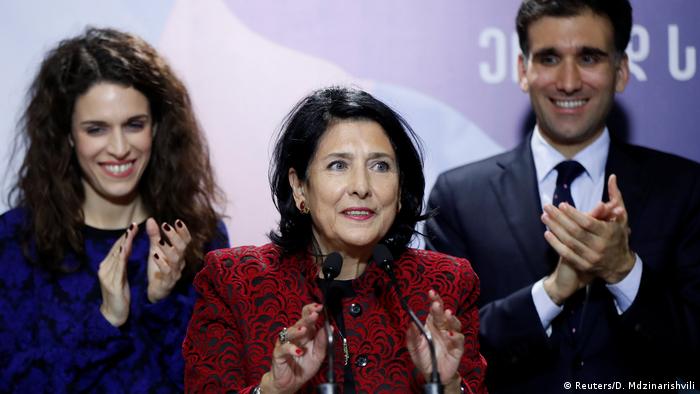 Salome Zurabishvili won Wednesday's run-off vote for Georgia's presidency with 59.6 percent of the ballot, according to the Central Election Commission. Turnout was 56.23 percent.

The first woman to be elected to the role was backed by the ruling Georgian Dream party, founded by billionaire banker Bidzina Ivanishvili, the country's richest man. Zurabishvili is expected to try and balance pro-Western aspirations while avoiding antagonizing Moscow.

Opposition candidate Grigol Vashadze took 40.4 percent, after results from almost all the polling stations had been tallied. He immediately claimed "mass electoral fraud" in a statement to the pro-opposition Rustavi-2 broadcaster.

"The oligarch has stamped out Georgian democracy and the institutions of elections," Vashadze said, referring to Ivanishvili. "I urge Georgians to defend our freedom, democracy and the law. I call on you to start mass peaceful rallies and demand snap parliamentary polls."

An investigation into the allegations has been launched by the Prosecutor General's office.

The French-born Zurabishvili had been a diplomat before serving as Georgia's foreign minister in 2004-2005 before being fired from the job. The 66-year-old had alienated some senior diplomats who accused her of arrogance.

Zurabishvili said she and her children had received death threats during the election campaign from people affiliated with the opposition United National Movement (UNM), headed by exiled former President Mikheil Saakashvili.

But the presidency is essentially a ceremonial role, with main political powers lying with the Prime Minister Mamuka Bakhtadze.

Georgia signed an association agreement with the EU in 2014, and in 2017 a Free Trade Agreement with China as part of its efforts to diversify economic ties.

It is the last time that voters will choose their president. From 2024, he or she will be chosen by an electoral college of 300 lawmakers and regional officials.

The European Commission has recommended EU member candidate status for Ukraine and Moldova, but said Georgia still falls short. In Tbilisi, tens of thousands came out to defend their dream of a future in Europe.