Georg Baselitz was thrown out of art school at the age of 18 because of his love for Picasso, and he has remained controversial and provocative ever since. To mark his 80th birthday, DW looks back at his life and work.

When a young and up-and-coming artist is kicked out of an art academy, that could mean either an early end to his career or the beginning of life on the world stage. The latter happened to Georg Baselitz.

In 1956, he moved from Deutschbaselitz in the state of Saxony to East Berlin to study art. But his schooling only lasted for two terms. During his vacations, the 18-year-old Baselitz, whose name back then was still Hans-Georg Kern, refused to work at an industrial site in Rostock — something that was expected from students in the former communist East Germany. He preferred to paint in the style of Pablo Picasso.

With the Berlin Wall not yet built, he was able to move from East to West Berlin where he became acquainted with the abstract art movement, which was prevalent in the German art world at the time. Instead of following that artistic style, Baselitz, always protesting against the status quo, turned to expressive realism.

In 1961, the year when the Berlin Wall was built, he took on his nom de plume, stirring controversy once again by producing paintings that didn't fit the conservative conventions of the time. "During this time,I was a bullheaded, unruly and awkward guy who rejected everything," Baselitz once admitted to his friend Bianca Jagger in the magazine "Interview."

To this day, it remains unclear whether or not the scandal was actively stirred by gallerist Michael Werner, who was said to have promoted sensationalist reporting of the issue which then led to confiscation of the works. Whether the allegations were true or not, Werner subsequently emerged as an important player in Germany's art market, and Baselitz suddenly managed to sell his paintings.

Baselitz had finally established his image of an unfaltering rebel, an image that has remained with him his entire life. And he certainly never ceases to contribute to this image by making controversial statements. Some examples: he has repeatedly said women aren't able to paint, which is why prices for their works on the art market remain low. And he once referred to the Documenta contemporary art exhibition in Kassel as the "Paralympics." Such controversial remarks have helped maintain his maverick reputation.

Young and in vogue

On the occasion of the artist's 80th birthday, roughly 100 of his works (that he himself considers as "battles") have been on show in a retrospective on the Fondation Beyeler in Basel since January 21. From June onward, the works, among them the controversial painting "The Naked Man," will be shown in Washington.

In 2015, Baselitz withdrew his loaned works from German museums, protesting against a planned revision of a German law on the protection of cultural goods. That law, later relaxed, stipulated that it was no longer permitted to export entire museum collections, which meant that artists, collectors, gallerists and auction houses were only allowed to sell artworks in Germany.

The Baselitz protest is understandable as his artworks sell for hundreds of thousands of euros all over the world, with some of the older works even selling for more than €1 million. For Baselitz, all this was no reason to  give up. "I want to remain in vogue, to remain young," he told the German magazine "Der Spiegel" in 2013. The German art ranking Kunstkompass still puts him in the fourth position in a ranking of the most important contemporary living artists. 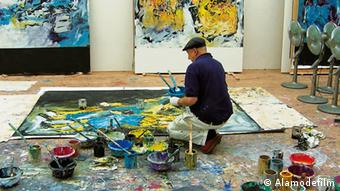 In 2013, Baselitz allowed documentary filmmakers into his studios in Germany and Italy

What has greatly contributed to Baselitz's fame is his ability of reinventing himself and his art over and over again, sometimes to the desperation of art traders, as customers tend to buy familiar art.

In the mid 1960s, Baselitz created roughly 60 paintings within a very short period of time, which became known as "Heroes."

As Baselitz told Jagger, he "fumbled around" with 30 of these paintings because he grew tired of these exhausting images. To him, the paintings were like a completed biographical work.

What followed was a chapter that made him world famous and unique, with Baselitz painting pictures that were turned their head.

"Now I didn't need to invent monstrous things anymore. I could simply take a photo of an apple tree or an eagle and paint in a realistic, conservative fashion. By turning the images upside down, it was no longer necessary to press on with the painting," he later said. In this way, he managed to change the public's viewing habits, to sharpen perceptions and to make people wonder: Is everything in the right spot? And what's all this about?

In this way, Baselitz was absolutely unique. And then he turned to producing huge wooden sculptures. Baselitz also repainted earlier works by applying his so-called "remix," to link them to the present. Before his 75th birthday, he announced that from then on, he would produce mainly black paintings.

Museums all over the world have exhibited his works, and he was featured at the German pavilion at the Venice Biennale in 2015. Baselitz, who in 2013 moved to Salzburg with his wife, will also be honored in his home country on his 80th birthday. The town of Kamenz in Saxony, which Deutschbaselitz joined in 1999, will devote two exhibitions, a lecture and a book premiere to him during 2018.

Georg Baselitz, the man who turned the art world upside down

Georg Baselitz was thrown out of art school at the age of 18, and has fostered the image of an art world maverick ever since. To mark his 80th birthday, DW looks back at his life and work. (23.01.2018)