Many of those protesting against police brutality and racism in front of the White House and all over the United States are less than 25 years old. For them, giving up is not an option.

Westen is wearing a "Black Lives Matter" T-shirt and a protective face mask embroidered with the words "I can't breathe." The 12-year-old has accompanied his father, who is among those protesting against racism near the White House. For several days, thousands of people have been gathering here to take a stand against police violence and to remember George Floyd, a black man who was killed in Minneapolis on May 25 by a white police officer. He came here "to represent George Floyd, my country and my culture," Westen says. What happened to Floyd "wasn't cool."

The schoolboy is one of the youngest protesters near the White House. But many of the people vociferously demanding change here today belong to Generation Z — young women and men who were born in the mid-1990s or later. Many of them are participating in a huge protest rally for the first time. 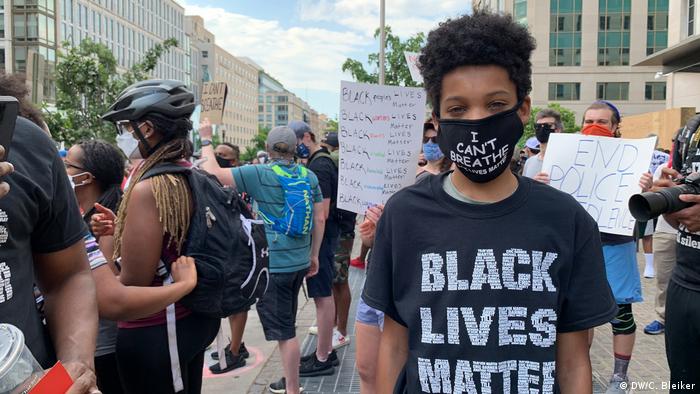 "This is sort of the first big movement that we've been a part of. The last time there was one of these marches we were just a bit too young to really understand the message behind it," says 18-year-old Noel, who has joined the rally accompanied by his little brother and a couple of friends. "But now that we're old enough to understand what's happening, we're out here just doing what we can for the community."

"When sometimes I feel despair, I just see what's happening with young people all across the country, and the talent and the voice and the sophistication that they're displaying," Obama said, adding that Martin Luther King Jr. and Malcolm X "were young when they got involved in their causes."

He said young people standing up made him feel optimistic: "It makes me feel as if, you know, this country's gonna get better."

Mya, 21, is also among the young people for whom protesting in the wake of George Floyd's death marks their first participation in a social movement. "We were tired when Trayvon Martin happened, when Eric Garner happened," she says, alluding to African Americans killed by police in recent years. "I'm finally at the age where I can get involved. I've got to make it count."

And it seems as if the young demonstrators' steady protests and demands for justice are making an impact. The charge against Derek Chauvin, the police officer who pressed his knee against Floyd's neck for almost nine minutes before he died, has been upgraded from third-degree murder to second-degree murder, which means the officer is now facing a prison sentence of up to 40 instead of up to 25 years. And on Wednesday, it was announced that three police officers who were at the scene during Floyd's arrest and death will be charged with aiding and abetting second-degree murder.

Commitment, however, must involve more than just taking part in the protests, says 25-year-old Bryan, who has joined a rally in Washington although his job at the House of Representatives actually bars him from participating. But he's no longer able to just remain on the sidelines. "Initially, we must vote Trump out," Bryan says. "Afterwards, police reforms have to be implemented."

He, too, has been stopped by police officers over trifles numerous times, he says. "I've been pulled over for going five miles over the speed limit. They tried to ask me do I have drugs on me when I just got out of the military." Bryan says he is "tired of seeing my people die." The young man's eyes are now filled with tears of anger over injustice. 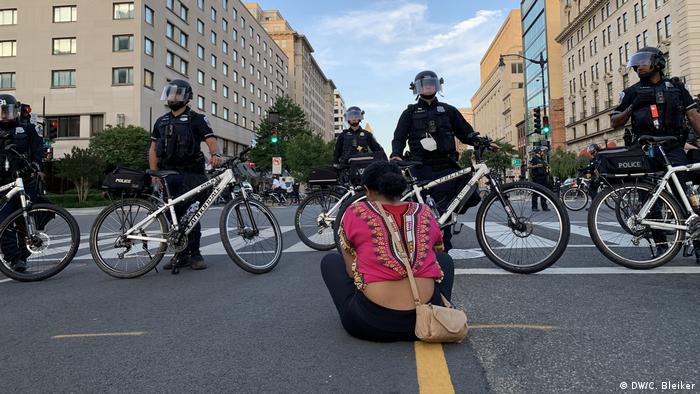 Deborah, 18, took part in protests near the White House

Deborah, 18, isn't just hopeful that she and the other protesters will actually be able to bring about change. "We have to," she says, sitting on the ground while facing a row of uniformed police officers. "We have no other choice."

One voice among many

Since last week's killing of George Floyd, a black man, cities across the US have seen ongoing protests against police brutality. Many young people are among the demonstrators in Washington D.C., and they want justice. (05.06.2020)