Gauri Lankesh murder - Indian journalists in the line of fire | Asia| An in-depth look at news from across the continent | DW | 07.09.2017

Gauri Lankesh murder - Indian journalists in the line of fire

The cold-blooded killing of a prominent journalist has exposed how dissent and debate has rapidly shrunk in India's mainstream media. The murder is another reminder of the climate of fear in which journalists operate. 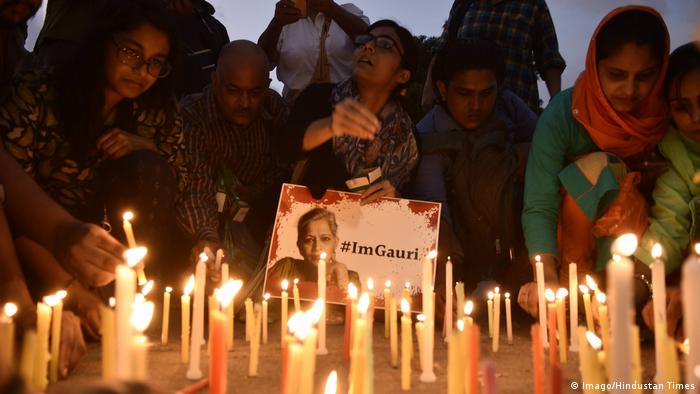 Carrying placards that read, "I am Gauri" and "Who is Next?", thousands of people including social workers, journalists, activists, film and theatre actors came together across the South Asian country to assert their "right to dissent" and protest over the brutal murder of noted journalist and activist Gauri Lankesh.

Lankesh, 55, who was the publisher and editor of the regional daily Gauri Lankesh Patrika, was gunned down by unidentified assailants at her home in the southern city of Bengaluru on Tuesday.

Expectedly, the high-profile murder unleashed outrage across India even as the Karnataka state government quickly set up a special team to investigate the crime. The initial findings from the probe suggest that it was a pre-meditated assassination. 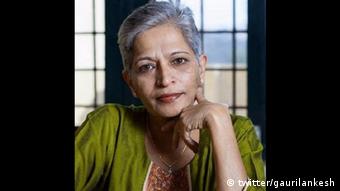 Known for fearless writings, Gauri Lankesh voiced her opinions boldly and was never hesitant to call a spade a spade

"It is too early to say who was behind this murder and what could be the motive. We also need to establish if there are any linkages with the murder of scholar M M Kalburgi that happened in a similar fashion two years earlier," Karnataka's Home Minister Ramalinga Reddy told DW.

Gauri's murder has revived memories of the 2015 murder of Kalburgi, the 77-year-old former vice chancellor of Hampi University, and the failure of the police to make any arrests in this case, piling more pressure on the Karnataka police to hunt her killers.

"She may have got threats but she never told us. We want justice and want the killers to be identified and nabbed. Only then can we rest easy," Gauri Lankesh's brother Indrajit told DW.

Known for fearless writings, Lankesh voiced her opinions boldly and was never hesitant to call a spade a spade and that clearly irked the ruling establishment, say her friends and close associates. For a generation of journalists, she was someone everyone looked up to especially when it came to expose wrongdoing and corruption.

"She was feisty, blunt and forthright, and diplomacy was not her agenda. She made as many friends as she made enemies," recounts Nandan Reddy, an activist and a long-time friend.

In her over three-decade long career she took on the establishment in multiple ways. Lankesh helped out former Maoist rebels who wanted to join the mainstream, espoused the causes of both landless laborers and impoverished low-caste Dalits, and supported progressive movements that questioned authority. Her writings were against communalism and hardline Hindutva groups. In fact, she had been convicted in a criminal defamation case filed by the ruling Bharatiya Janata Party (BJP) leaders.

"She was like the Indian version of a Veronica Guerin, the Irish reporter, and Anna Politkovskaya, the Russian journalist, who were killed mysteriously in the peak of their respective careers. Lankesh was not bothered about threats and intimidation," Manisha Chandran, a journalist and former colleague, told DW.

Her death has undoubtedly put the spotlight on some uncomfortable truths about Indian journalism and, more importantly, how media activists fear a bigger and more organized attempt from the government to rein in free speech.

In its 2017 World Press Freedom ranking, Reporters Without Borders put India at 136 in a list of 192 nations, based on measuring the amount of freedom journalists in the country have.

"Journalists are increasingly the targets of online smear campaigns by the most radical nationalists, who vilify them and even threaten physical reprisals," said the report released in April, blaming "Modi's nationalism" and growing "self-censorship" in the mainstream media.

Another non-profit media watchdog, The Hoot, which examined the country's press freedom pointed out that between January 2016 and April 2017, there were 54 reported attacks on journalists, three instances of television news channels being banned, 45 internet shutdowns and 45 sedition cases against individuals and groups.

It also pointed out that seven journalists were killed during that period, with at least one of the deaths clearly attributable to the journalists' work.

"The message sent out is clear. This (murder) is the consequence one has to face if we dissent. This murder should come as a serious wake-up call and we have to drive this point home hard," Ravish Kumar, senior journalist working for the broadcaster NDTV, told DW.

"The killing of journalist Gauri Lankesh raises alarms about the state of freedom of expression in the country.  She was never afraid of speaking truth," said Asmita Basu, program director at Amnesty International India.

Unfortunately, online trolls have expressed happiness over the killing of Lankesh. Many Twitter users have been spewing venom since her ghastly murder. While some of them compare the journalist to a "militant," others have tweeted saying Lankesh "got what she deserved."

The Indian media presently faces an unusually strong executive thanks to the electoral mandate enjoyed by the Narendra Modi government which came to office in 2014.

Some media analysts say the attempt to muzzle the press now comes in various forms. More corporates with strong political connections have now entered newsrooms than ever before.  So has the rise of the BJP's political power contributed to this lessening of free speech in the media?

"What has perhaps changed is that there is now a conscious attempt to target the dissenters as 'anti-national,' thereby adding a new, more noxious edge to an already polarized public debate," says celebrity anchor and journalist Rajdeep Sardesai.

"By seeking to cut off government access and running malevolent campaigns against so-called 'anti-national' journalists, the aim is clear - create a 'them' versus 'us' atmosphere that reduces the space for an open and robust dialogue in the media," added Sardesai.

For now, the focus is on the investigation and the hope that the assailants are arrested soon. A failure in this regard, many say, would just add to the long list of unsolved crimes and embolden those who believe that dissent must be met with violence.