The foreign and development ministers of the world's most influential nations met to discuss the fight against COVID and how to speed up the recovery of the global economy. 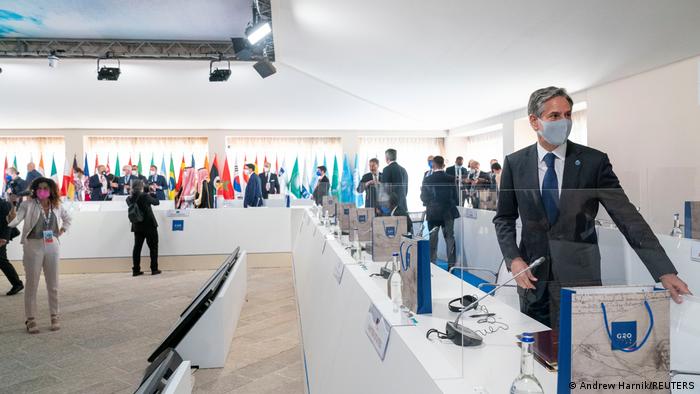 With the pandemic continuing to loom large, the foreign and development ministers of the Group of 20 (G20) called for better international solutions for global crises on Tuesday.

The gathering in the Italian city of Matera was their first face-to-face meeting of G20 members in two years.

Although the COVID pandemic was high up on the agenda, ministers also discussed the global climate change emergency and food shortages in Africa.

What did the G20 ministers say about COVID?

Ministers discussed ways to coordinate the international response to the health emergency.

They also discussed ways to ensure equitable worldwide access to vaccines and diagnostics.

"The pandemic has highlighted the need for an international response to emergencies that transcend national boundaries," Italian Foreign Minister Luigi Di Maio told the gathering.

German Foreign Minister Heiko Maas said that the pandemic should be fought together, "because each of us will only be safe when we are all safe. And everyone should actually understand that."

Maas was especially critical of efforts to use the pandemic to "achieve short-term geostrategic advantages."

US Secretary of State Antony Blinken reiterated the importance of bringing vaccines to poorer countries that might otherwise struggle to obtain doses. "To bring the pandemic to an end, we must get more vaccines to more places," he said.

At a world health summit in Rome in May, the G20 countries had already agreed to forge stronger cooperation in all areas of health care to be better equipped against global crises in the future.

COVID-19 Special: What we know now — and what we don't

Why was Africa on the agenda?

Other than the pandemic, ministers' talked about other subjects ranging from climate change and international trade to preventing food shortages in Africa.

"The G20 has the duty to sustain Africa in emerging from a difficult period,'' Italian Foreign Minister Luigi Di Maio said after hosting today's event.

"We must do it in a way so that in Africa, people aren't forced any more to abandon their country and their territory, and I don't think anyone can carry out this battle alone,'' he said.

In this respect, the minister revealed Italy would be hosting a conference in Rome focusing on Africa, which he said had "enormous possibility of growth". He asked G20 countries to work "together to unleash this enormous potential".

At the close of a long day of meetings, he said G20 members were ready to face "the common commitment against food insecurity" around the world.

"Beyond the differences and distances among some countries present at the G20 table, we are all in agreement on climate change, sustainability, on the great issues that today can only be resolved with global cooperation," Maio concluded.

What was discussed on the Middle East?

Top diplomats from the US, France and Saudi Arabia met to discuss Lebanon and its deepening crisis in a joint meeting.

The three countries discussed "the need for Lebanon's political leaders to show real leadership by implementing overdue reforms to stabilise the economy and provide the Lebanese people with much-needed relief," Blinken wrote on Twitter.

Lebanon has been without a working government since a huge explosion last year tore through Beirut killing over 200 people. Fuel shortages and the dropping value of the Lebanese pound have added to the country's woes.

Blinken also met with Saudi Foreign Minister Prince Faisal bin Farhan to speak about the war in Yemen and human rights, issues which new US president Joe Biden pledged to tackle when he took office.

The G20 comprises most of the world's largest economies, bringing together both industrialized and developing nations such as the US, China, Germany, India and Brazil.

These countries account for more than 80% of the world economic output, 75% of global trade and 60% of the population of the planet.

The foreign and development ministers' meeting prepared the groundwork for this year's G20 leaders' summit in Rome at the end of October.