Germany ran out 1-0 World Cup final winners on Sunday at the Maracana in Rio de Janeiro. The victory adds a historic fourth star to the German crest, thanks to a beautiful effort from Mario Götze.

Germany's bench swarmed the pitch after the final whistle, celebrating their first World Cup title since 1990.

The victory silenced the thousands of Argentine fans who had filled the stadium and descended on Rio for the final. Following the victory, the city's iconic Christ the Redeemer statue was lit with the black, red and gold colors of the German flag..

"It's unbelievable," said Manuel Neuer, who was named the tournament's best goalkeeper. "I don't know how late we'll be celebrating, but we'll still be waking up with a grin tomorrow."

There was bad news for Germany even before the first kick. Midfielder Sami Khedira, whose return to form has pushed the team to new heights this tournmanet, was scratched from the teamsheet at the last minute after picking up a calf strain in warm-ups. He was replaced by Borussia Mönchengladbach youngster Christoph Kramer.

Gonzalo Higuain had Argentina's best opportunities of the first half. After picking up an errant header and firing wide in front of goal in the 21st minute, his successful effort ten minutes later was narrowly ruled offside. Benedikt Höwedes, meanwhile, will have wanted another shot at his header off the post just before the break. 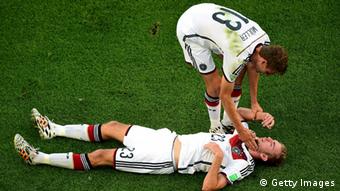 Kramer's surprise start was cut short just past the half hour mark. A collision with defender Ezequial Garay in the Argentina box left the 23-year-old on the ground and clutching his head. He briefly attempted to play on, but was eventually substituted for Andre Schürrle.

Lionel Messi proved most-dangerous for the Argentines in the second 45 minutes, when his trademark left-footed effort inside the box went just wide immediately after the restart. Schürrle and Toni Kroos and late, Götze, all had excellent opportunities to put their side ahead, but heavy touches and weak finishing meant goalkeeper Sergio Romero was never truly tested.

Instead it finished level after 90 minutes, and for the seventh time in World Cup history, the final went to extra time.

Schürrle's stinging effort just after play resumed nearly put Germany ahead, but Romero was there to save from close range. Seven minutes later, Rodrigo Palacio had a near-golden chance on goal after a Hummels error, but his looping effort went wide. 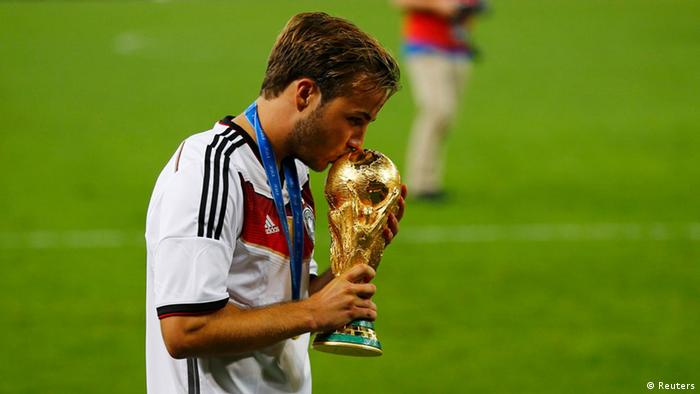 The deciding goal finaly came in the 112th minute. Working his way down the left flank, Schürrle crossed to a cutting Götze in the center of the box. The Bayern Munich man beautifully trapped the ball with his chest and twisted to fire a left-footed volley across goal and into the net

The magnificent goal proved the decider in the end, as the Germans held on for the final match's final minutes to secure their country's fourth World Cup crown. In winning, Germany have become the first European country to win the World Cup in South America.

"To be the first European team picking up the title in South America is really unbelievable," said captain Philipp Lahm.

Congratulations are pouring in from around the world and the cosmos for Germany's World Cup victory over Argentina. After securing a historic fourth title, the German press are understandably elated. (14.07.2014)

Mario Götze scored the winning goal for Germany in extra time of the 2014 World Cup final against Argentina. A close first half saw Higuain miss a great chance, and Messi missed in the second half too. (13.07.2014)