France called for crisis talks after the recent deaths of 27 people attempting to cross the English Channel. France rescinded the invite to UK Home Secretary Priti Patel after a row broke out late last week. 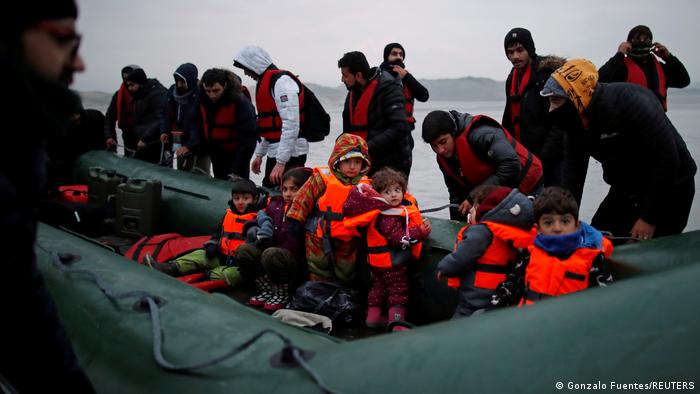 Thousands hope to make the perilous journey across the English Channel

France concluded talks in the northern city of Calais on Sunday to address the issue of human trafficking gangs, after the recent drowning death of 27 people who were attempting to cross the English Channel in an inflatable boat.

Immigration ministers from Germany, the Netherlands and Belgium, but not the United Kingdom, attended.

On Wednesday, a total of 17 men, seven women and three children died. Migrants still hoping to make the journey across the Channel told the AFP news agency that most of the victims were Iraqis, Iranians and Afghans.

What measures were agreed?

French, Belgian, Dutch and German officials agreed to work together to fight the growing menace of migrant smuggling gangs in Calais.

From December 1, the European Union would deploy a plane operated by Frontex that would monitor the shores of France, Belgium and the Netherlands for smuggling networks.

The officials will keep a closer eye on the trade of inflatable boats used to transport desperate migrants fleeing war and poverty in countries like Afghanistan, Sudan and Syria.

Darmanin said European countries "want to work with our British friends and allies" despite their absence from the emergency meeting.

"This meeting was not anti-English. It was pro-European," added Darmanin.

Why did France disinvite the UK?

France opted to rescind the invitation it had extended to UK Home Secretary Priti Patel in the aftermath of the tragedy, after British Prime Minister Boris Johnson shared on Twitter a letter to French President Emmanuel Macron, which was criticized for deflecting the blame to France for the tragedy.

Macron reacted to the open letter with personal criticism of Johnson, calling him "not serious."

Patel said Sunday her absence at the meeting was "unfortunate."

Earlier Sunday, Patel met with Dutch Migration Minister Ankie Broekers-Knol and stressed "the need for European partners to work together" by sharing intelligence and police information, according to her office.

Both countries have faced criticism for bickering in the face of human tragedy.

On Saturday, European Commission Vice President Margaritis Schinas told reporters during a trip to his native Greece that the UK needs to deal with its own migration issues after Brexit.

"I recall well the main slogan of the referendum campaign is 'we take back control,'" Schinas said. "Since the UK took back control, it's up to them now to find the necessary measures to operationalize the control they took back."

What has the UK proposed on migration?

In the part of the letter perhaps most contentious to Paris, Johnson proposed sending those migrants who cross the Channel back to France in the hopes of destroying the business model for human traffickers.

He also proposed joint police and coast guard patrols on the northern French coast, which France has said is a violation of its sovereignty.

UK Health Secretary Sajid Javid said on Sunday "it wasn't wrong" of Johnson to disclose the diplomatic note as a public letter instead.

"We all need to be doing what we can to break the business model of these people smugglers. That does mean working closely with our friends, France," Javid said.

"Our policy is very clear: these boats must stop. We can't just do it on our own. We do need the cooperation of the French," he added.