Fishermen in the waters between France and the UK found an empty vessel and bodies in the water. Authorities said at least 30 migrants have died. 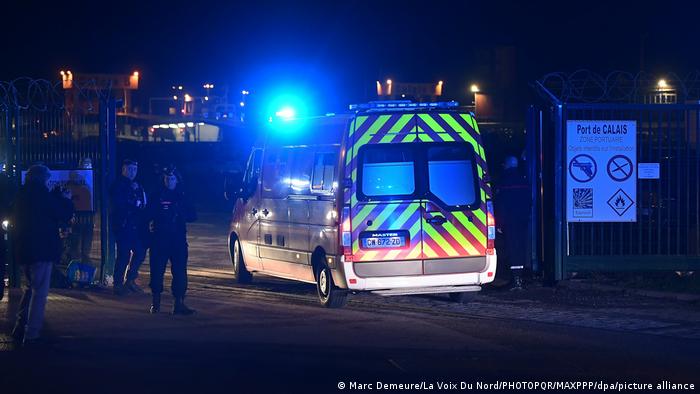 Dozens of people were found dead on Wednesday in the English Channel — the waters between France and the UK — after their inflatable dinghy capsized.

The incident occurred near the French coastal cities of Calais and Dunkirk, when fishermen spotted the empty dinghy and bodies on the water. French Interior Minister Gerald Darmanin said 34 people were believed to have been on the boat.

Darmanin said 31 bodies and two survivors were found in what he considered the worst-ever disaster involving migrants in the English Channel.

According to a database run by the International Organization for Migration (IOM)'s Missing Migrants Project, it was the deadliest migrant drowning incident in the English Channel since it began collecting data in 2014.

Darmanin told France's BFM TV that four suspected smugglers had been arrested in connection with the capsizing.

French President Emmanuel Macron reacted to the tragedy by calling for an emergency meeting of EU ministers involved in migration issues, saying he would not "let the Channel turn into a cemetery."

UK's Johnson 'shocked' by deaths of migrants in the English Channel

British Prime Minister Boris Johnson said he was "shocked and appalled" by the deaths of the migrants in the English Channel.

"My thoughts and sympathies are the victims and their families and it is in an appalling thing that they have suffered. But this disaster underscores how dangerous it is to cross the Channel in this way," Johnson said.

Johnson said the UK should "use every power that we can, we leave no stone unturned, to demolish the business proposition of the human traffickers and the gangsters."

"We have to work with our French friends, with our European partners. I say to our partners across the Channel, now is the time for us all to work together to do everything we can to break these gangs who are literally getting away with murder," he said.

The English Channel is one of the world's busiest shipping lanes. The currents on the water are strong, which makes the seemingly short voyage rather dangerous.

In 2019, 39 migrants from Vietnam died inside a refrigerated truck while crossing from Belgium to the UK over ferry, in what was the worst-accident to occur between the European mainland and the UK.

The purchases will no longer be possible in certain stores in northern France. On Friday three migrants were reported missing after trying to cross the channel in canoes.