From Mumbai to Paris, the cities investing in the planet | Environment | All topics from climate change to conservation | DW | 21.04.2022

From Mumbai to Paris, the cities investing in the planet

This Earth Day, we show how city councils and mayors have stepped up to boldly decarbonize in the face of national government inaction. 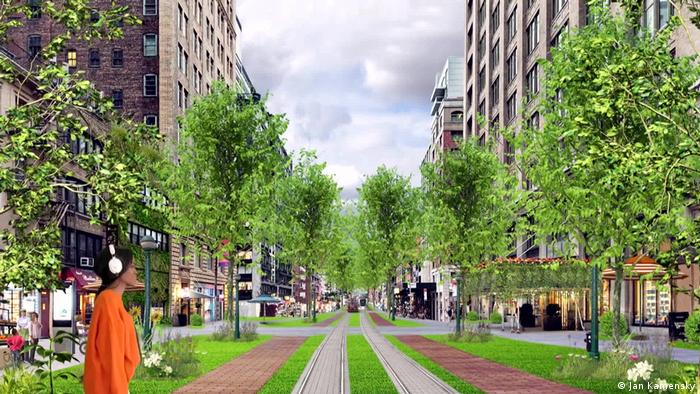 A vision for a green city: Local governments are creating low-emission cities built for people

On this year's Earth Day, governments who "hold the keys to transform and build the green economy" are being summoned to "invest in our planet." Yet so far, national governments signed up to the Paris Climate Agreement have been slow to facilitate low-carbon economies.

Current emission reduction commitments are on track for an increase of nearly 3 degrees Celsius (5.4 F) of global heating above preindustrial levels — double the 1.5 C threshold for a livable planet. Meanwhile, governments continue to subsidize the fossil fuel industry at three times the rate of clean energy, putting far-reaching emissions cuts out of reach.

The failures are complex, ranging from the long-term influence of the fossil fuel lobby on the national stage to the energy crisis fueled by the invasion of Ukraine, which has states looking to boost non-Russian oil and gas supply.

But local, city and regional governments are stepping up in the wake of sluggish national climate action.

From cities such as Copenhagen, which is promising climate neutrality by 2025 — way ahead of the deadline agreed to in Paris in 2015 — to compact and car-free zero-carbon districts, here are four ways municipal authorities are investing in the planet.

Back in 2012, Copenhagen's government unveiled a 2025 Climate Plan that had the ambitious goal of creating the world's first carbon-neutral city. The Danish capital remains on track to reach net-zero emissions by 2025, a full 25 years before the national government's 2050 net-zero target.

About 66% of city emissions are attributed to energy, and 34% to transport. It plans to make cuts by tackling energy consumption and production, as well as green mobility. The aim is to reduce emissions by 100% compared to 2005 and increase economic growth by near 25% in the same period through greater investment and job creation. In 2020, Copenhagen had only another 20% in cuts to go to reach its goal, with private cars the main source of remaining carbon pollution in the city.

With electricity and heat the biggest source of CO2, Copenhagen's government is replacing coal, oil and gas with renewable energy. Wind, solar and biomass have already taken up much of this slack, but 50% of the reduction will come simply from energy efficiency — the city has installed a smart energy grid to reduce massive waste across housing, retail and production.

In terms of transport, the Copenhagen government wants at least 75% of trips in the city to be taken on foot, bike or public transport by 2025. Internal combustion engine vehicles will be banned in the city by 2030. 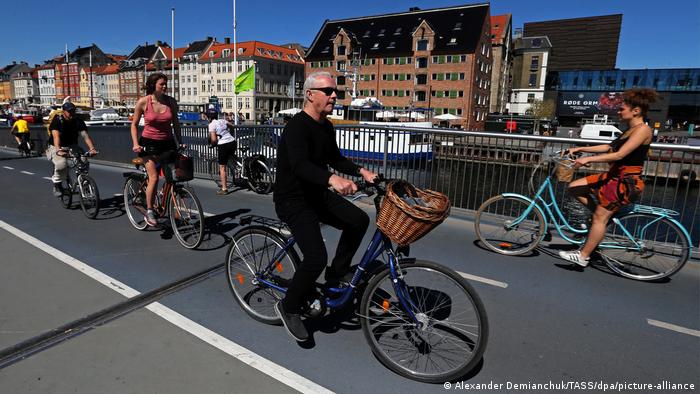 Bicycles will dominate the streets in climate-neutral Copenhagen

When Indian Prime Minister Narendra Modi committed to carbon neutrality by 2070 at COP26, it was seen as a promising step from the world's third-biggest CO2 emitter.

But Mumbai, the country's most-populous city, with well over 20 million people in its metropolitan area, is upping this ambition, promising to achieve net-zero carbon emissions two decades ahead of schedule.

The city's first Climate Action Plan was unveiled in March and was created in collaboration with the US nonprofit the World Resources Institute and global urban climate-action initiative C40 Cities.

Acknowledging the need for climate adaptation in a coastal megacity that is highly vulnerable to heat stress and flooding, the plan also calls for the decarbonization of an energy sector responsible for 72% of total city emissions. With an energy grid nearly wholly powered by coal, Mumbai will ramp up solar power in particular to reach a 50% renewables target by 2050. It will also focus on energy efficiency in buildings that make up most energy emissions.

Transport is another key focus, with plans to electrify Mumbai's extensive urban transport network. For a start, it will put over 2,000 electric buses on the road by 2023.

Mumbai is also establishing a zero-landfill waste management plan and planting urban forests throughout the city to mitigate the near 10% of emissions attributed to waste, especially landfills that spew methane.

The idea is embodied in the concept of the 15-minute city, with experiments already taking place in the wake of the pandemic to reduce travel time and enable people to live and work locally, including Melbourne's 20-minute neighborhoods and the Paris 15-minute city.

The 15-minute city was central to Paris Mayor Anne Hidalgo's 2020 reelection campaign. The traffic-clogged French capital is installing cycle paths on every street, in part by reclaiming 70% of on-street car parking. The aim is to cut air, noise and carbon pollution as part of Paris' 2050 carbon-neutral target.

By expanding co-working hubs and encouraging use of local shops and playgrounds, the city wants to facilitate "hyperproximity" in Paris neighborhoods whereby residents can access all amenities within a relaxed 15-minute stroll or bicycle ride from home.

4. Climate-friendly communities in Freiburg and Seattle

Though city and regional authorities are often beating national governments on climate action, even more can be done at the micro level of self-developed urban housing cooperatives.

In Seattle, an architecture and urbanism firm, Larch Lab, is focused on decarbonized, low-energy urban buildings and "ecodistricts" based on the German idea of "baugruppen," or building groups — meaning housing cooperatives.

Developed by residents rather than developers, the idea is that these sustainable districts will achieve superior building efficiency by employing net-zero energy Passivhaus building standards, which are expensive up-front but more affordable in the long term.

This dream is already alive back in Germany in the district Vauban, a model eco-neighborhood in the pioneering green city of Freiburg. At the forefront of ambitious climate targets, Freiburg is planning a 60% emissions cut by 2030.

The zero-emissions town, dubbed the greenest in Europe, was developed by Passivhaus architects and a local community group with strong support from a municipal government committed to investing in the planet.

Why do we build cities around cars?