He was a man of new beginnings. Friedrich Ebert led Germany through difficult times after it lost the First World War. Both admired and controversial, he was also the victim of a smear campaign by far-right forces.

At the end of 1918, Germany was at a crossroads. Its defeat in World War I had been sealed. Kaiser Wilhelm II fled into exile in the Netherlands in the course of the November Revolution, which began with a sailors' uprising. Countless people were starving. Traumatized, war-disabled soldiers came back from the front, desperately looking for their place in a shattered world.

In this time of confusion and upheaval, the son of a tailor played a decisive role in shaping political fate: Friedrich Ebert, born on February 4, 1871, in Heidelberg, the seventh of nine children.

Ebert's life represented the dream of social advancement: A trained saddlery journeyman who traveled for years after completing his apprenticeship and had a stint as a pub owner, his diligence, organizational talent and a sense of duty finally brought him to the top of the political establishment as chair of the Social Democratic Party of Germany (SPD).

The suppressed World War I defeat

Starting in November 1918, he served as a leading member of what was then termed Germany's "revolution government," a coalition of the SPD with the more radical Independent Social Democrats (USPD). The Great War had taken a heavy toll on Ebert personally: Two of his five children had died. Unaffiliated with any religion, he supported a fundamental move to change the direction of the country: to shift from Prussia's authoritarian monarchy to a modern democratic republic.

Democratic elections had yet to be introduced. In addition, the "revolution government" faced the difficult challenge of building up a country that was economically in tatters. Even amid the devastation, the majority of the German population could not accept the war defeat and clung to the idea of the bygone German Empire. The Germany of 1918 was a society that faced the painful challenge of needing to reinvent itself in order to have a future. 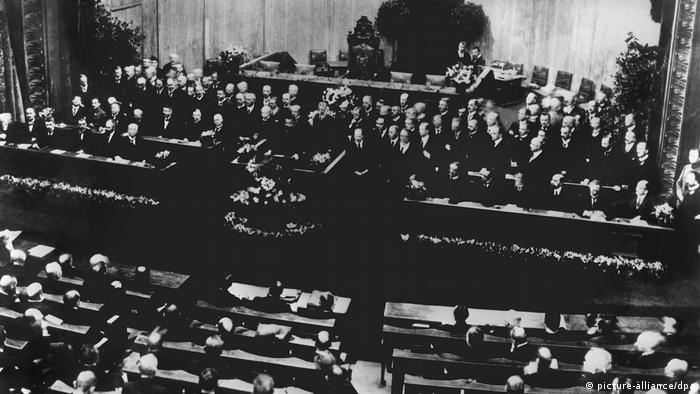 The first German National Assembly gathered in Weimar in February 1919

Ebert was the right man, in the right place, at the right time. "Today he is rightly regarded as a pioneer of democracy, who took on responsibility in one of the most complex and problematic periods in German history," says historian Peter Beule of the Friedrich Ebert Foundation. Thanks to his ability to compromise, Ebert managed to navigate the political chaos of the postwar period.

"That was something new in German politics," says Walter Mühlhausen, who runs the Reichspräsident Friedrich Ebert Memorial in Heidelberg. At that time, political parties were relatively new — and it was Ebert "who always insisted that one had to come to an agreement in the service of the cause."

But Ebert made himself an enemy of the far left. Because he worked with the old elites of the military and bureaucracy to establish democracy, leftist figures accused him of betraying the all-important labor movement at a key time. The situation escalated. Radical communists, socialists and the Marxist Spartakusbund mobilized on January 5, 1919, in Berlin to overthrow the government. Their aim: to block the path to parliamentary democracy, despite the will of the majority of Germans. The threat of civil war loomed, just a few days before Germany's first democratic election was due to take place. 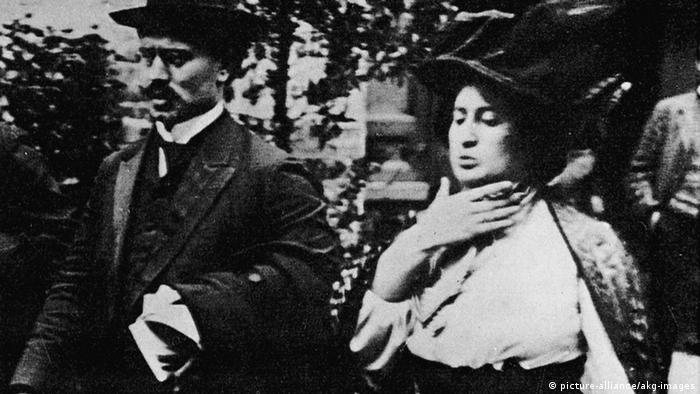 Ebert had the January Uprising, as it came to be known, put down. There was a week of bloody conflict in the streets. Government-appointed volunteer corps of former frontline soldiers and volunteers killed and tortured revolutionaries. Karl Liebknecht and Rosa Luxemburg, the two founders of the German Communist Party, were murdered shortly after the uprising was quashed. They have become iconic figures in German history.

Germany's women get the vote

But on January 19, 1919, parliamentary elections took place. Millions of women were allowed to vote for the first time; there was freedom of expression and freedom of the press. A few weeks later, while opening the National Assembly at Weimar, Ebert declared: "The German people are free, will remain free and will rule themselves in the future. This freedom is the only consolation that has remained for the German people, the only support they can use to work their way out of the bloodshed of war and defeat." Five days later, he was elected the first president of the Reich — the head of state under the Weimar constitution.

Ebert saw himself as a servant of all Germans and steered the young Weimar Republic through a variety of crises with his consensus-oriented politics. The reparations payments after World War I, which were stipulated in the Treaty of Versailles by the Allied victors, put further strain on the German economy, and coup attempts by the radical right and left followed. A smear and slander campaign by right-wing nationalists targeted Ebert as the representative of a republic they rejected. 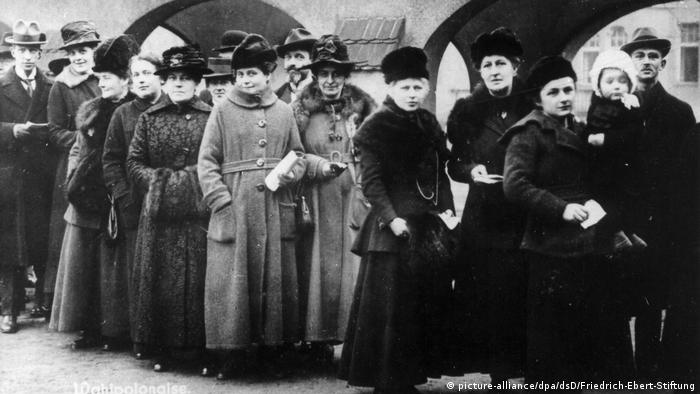 In 1919, women in Germany lined up in droves to vote for the first time

Head of state or enemy of the state?

The vilification of Ebert was a strange twist in a burgeoning democracy. "For a society that still mourned the empire, a social democrat in the state leadership — a saddler-journeyman, a tailor's son from Heidelberg — it was an absurdity. A saddler who somehow strayed onto the throne; that's how he was depicted," Ebert biographer Mühlhausen tells DW. The president defended himself by legal means, fighting more than 200 lawsuits.

Despite all the hostility he faced, Ebert remained the republic's anchor of stability, a guarantee of security, freedom and order. In his six years as president of the Reich, nine chancellors and twelve Cabinets came and went. And through it all, his focus remained on the well-being of workers and the socially disadvantaged. As a social democrat, he linked the idea of ​​democracy and the rule of law with the idea of ​​social emancipation, says historian Beule. "That also meant that democracy must create the material and practical conditions so that all people, regardless of their social situation, can represent their interests and participate in political life." 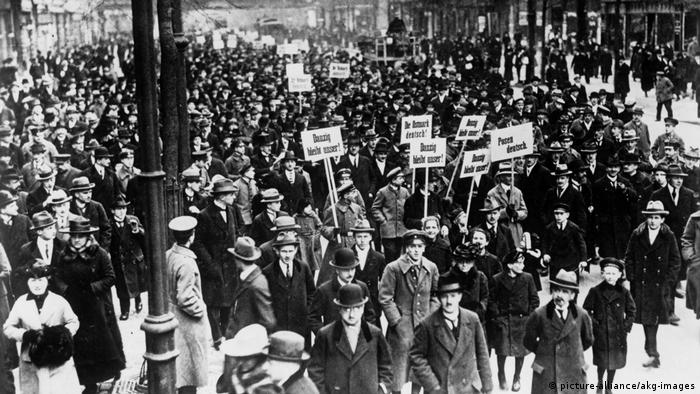 Ebert managed the postwar chaos when the Versailles Treaty forced a defeated Germany to pay heavy war reparations, angering many of its citizens

Ebert, who hailed from the humblest of backgrounds, had to laboriously develop the educational foundations for his political ambitions himself. And so he suggested the establishment of a foundation to enable children from the working class to gain social advancement through education. "Fair access to educational opportunities as a prerequisite for equal opportunities in society is associated in a very special way with the name Friedrich Ebert," says Beule.

Ebert died on February 28, 1925, at the age of 54. His early demise ended the phase of relative stability. The slow death of the Weimar democracy began. In 1933, Adolf Hitler came to power, destroying Ebert's life's work and ushering in the darkest chapter of German history.

Today, 150 years after Ebert's birth, Germany has been a solid democracy for decades. Nevertheless, the foundations of democracy must not be taken for granted. The far-right populist Alternative for Germany (AfD) regularly tests the limits of what can be said. And a tiny minority of conspiracy theorists incites more and more people on social networks.

The vulnerability of democracy

The history of the Weimar era has shown that democracy must be experienced, lived and defended on a daily basis — by all those who enjoy it, Mühlhausen says. Everyone who believes in democracy "has to defend this system — now, today and in the future." Because if a democracy has too few democrats, "it runs the risk of being consigned to the dustbin of history."

Gustav Stresemann and the Weimar Republic

This historical documentary argues that Germany’s first democracy didn’t have to fail. Gustav Stresemann became chancellor when the young Weimar Republic was plunged into chaos in the year of crises 1923.

Marie Juchacz: A life for justice and equality

She was a divorced single parent, politically active and a tireless advocate for women, children and workers. On February 19, 1919, Marie Juchacz also became the first woman to address a German parliament.