International talks aimed at a resumption of Ukraine's ceasefire are to reopen by Saturday under an agreement reached at a meeting of foreign ministers in Berlin. Fighting reignited in eastern Ukraine on Monday. 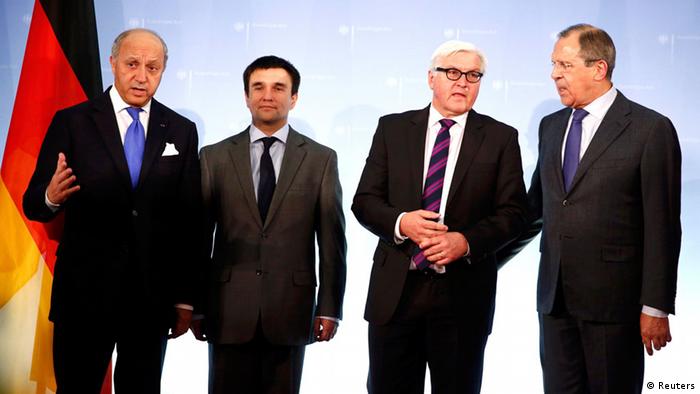 Foreign ministers of Ukraine, Russia, Germany and France meeting in Berlin on Wednesday agreed to seek new ceasefire talks involving the Organization of Security and Cooperation in Europe (OSCE), starting no later than Saturday in crisis-torn Ukraine.

The talks would include pro-Moscow rebels in eastern Ukraine.

The ministers agreed that the violence should cease on all sides, hostages should be released, and Ukraine border points with Russia should be brought back under Kyiv government control.

The goal was to reopen talks no later than Saturday "with the goal of reaching an unconditional and mutually agreed sustainable cease-fire" to be monitored by the OSCE.

Germany's Frank-Walter Steinmeier (center from right) said there was a "clear commitment to a multilateral ceasefire" involving the so-called Contact Group comprising Ukraine, Russia and the OSCE.

Russian Foreign Minister Sergei Lavrov told a joint news conference that the quartet had agreed on the "necessity to swiftly agreed conditions for a stable long-term truce."

Also present in Berlin were French Foreign Minister Laurent Fabius and Ukraine's Pavlo Klimkin, who said hostages must be released. Ukraine must be allowed to control its borders to stop the
rebels receiving fresh fighters and weapons, Klimkin said.

Steinmeier had hastily convened the talks after the Kyiv government ended the previous ceasefire, claiming that rebels had violated it numerous times.

The four ministers said they welcomed Russia's readiness to grant Ukrainian border guards access to Russian territory to take part in controlling two border crossings once a fresh ceasefire was in place.

Fighting between Kyiv government forces and separatist rebels has intensified in eastern Ukraine since Monday, when the extended but shaky 10-day ceasefire expired.

In Berlin Wednesday, Germany's Steinmeier warned that in the past 48 hours the situation had "dramatically escalated... and might get totally out of control".

In Luhansk, the other eastern region where separatists have declared independence, a stray missile hit a school near a rebel position but no injuries were reported.

Ukraine has resumed its assault on separatists. A fresh round of attacks on Tuesday followed the expiration of a tenuous 10-day truce. (01.07.2014)

Sanctions imposed on Russia over Ukraine have substantially slowed growth and will have a 'chilling effect' on investment, the International Monetary Fund has said. As a result, Russia could face a recession. (01.07.2014)