Bundesliga action in 2014 came to a close on Sunday as Hoffenheim handed hosts Hertha a 5-0 hammering in the German capital. Also, Joselu scored his fifth in five games to save Hannover a point against Freiburg. 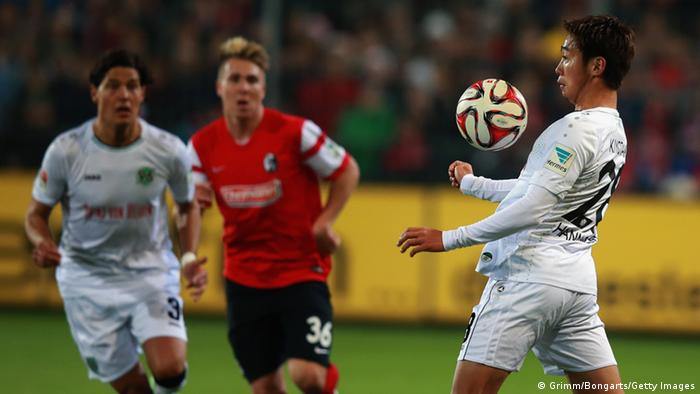 Hannover 96 drew 2-2 in Freiburg on Sunday in an entertaining last Bundesliga game of 2014. Shortly after the opening whistle, Roman Bürki made a brilliant reflex save to deny Joselu's curling effort as the visitors started on the front foot. Straight afterwards, Vladimir Darida fizzed a shot over the bar at the other end.

Spurred on by a rapturous home crowd, Freiburg went looking for the opener. Jonathan Schmid's shot was blocked by Hiroshi Sakai - hopeful shouts for a penalty followed.

The home side's shouts were brief, though, as Hannover quickly regained control. Jimmy Briand flashed a header of the inside of the post before Bürki got a fine touch to tip Joselu's drive onto the other post.

Ron-Robert Zieler saved a Schmid free kick as the first half looked to be heading towards a goalless end. It wasn't to be though as Freiburg, perhaps against the run of play, took the lead with the last touch of the first half. Christian Günter's low cross evaded Hannover's defenders and Mike Frantz swept home.

Thirteen seconds into the second half and Freiburg nearly doubled their tally. Felix Klaus hammered a shot onto the post and it took a strong reflex save from Zieler to stop Darida's rebound from finding the back of the net. 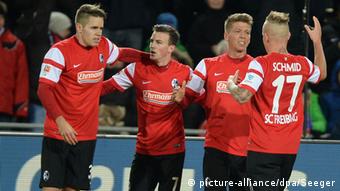 Hannover looked a different team in the second half, and not in a good way. Freiburg continued to take the game to the visitors and, after overplaying a counterattack, Admir Mehmedi crashed a swerving effort onto the crossbar with Zieler flapping.

Both sides battled before two quick goals set up a furious finale. Marc-Oliver Kempf, who was perhaps fortunate to be on the pitch for a professional foul on Stindl earlier in the half, snuck in to head in from a corner. A minute later though, and Hannover were back in the game and only 2-1 down after substitute Leonardo Bittencourt slammed home inside the box.

Hannover sensed there was a point to be had and they were right. A defensive mix-up ended with Bürki clearing the ball straight to Joselu, and the striker made no mistake slotting into the empty net in added time. The 2-2 draw left Freiburg heartbroken, but Borussia Dortmund fans perhaps slightly happier as they avoided being bottom of the league over Christmas.

Hoffenheim rampant in the capital

Hertha hosted Hoffenheim in Germany's capital and in a fairly subdued opening, Thomas Kraft's flap at a corner nearly cost the home team - Kevin Volland's shot in the ensuing goalmouth scramble was blocked.

The game looked as though it was going to need something special or unusual to spark it into life. When Kevin Volland's dangerous cross came in, that moment arrived as Hertha defender John Anthony Brooks converted the ball into his own net. 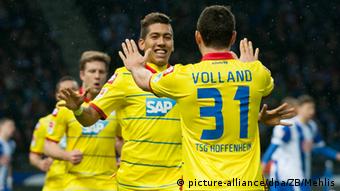 Hertha sent their visitors plenty of gifts on the day

Two minutes later, things went from bad to worse for the American international as he gave away a penalty after a clumsy challenge on Sven Schipplock. Sejad Salihovic stepped up and converted his 27th Bundesliga penalty and in the blink of an eye Hoffenheim were two goals to the good.

Both Brooks and Hertha struggled to recover from their setback. Kraft had to make a smart save to keep out a long-range Eugen Polanski effort.

Hoffenheim captain Andreas Beck then slipped in the area and Nico Schulz was blamed by referee Peter Sippel, giving the visitors their second penalty. Salihovic stepped up and converted again making it 3-0 - a scoreline that would stand at the break.

It took Hertha 10 minutes to muster their first chance of both the half and the game, but Anis Ben-Hatira slipped his back-post shot wide after a good run and cross from Schulz. Jos Luhukay's side lacked urgency and intent for most of the game, but particularly in the second half when they needed it most.

A counterattack from the visitors fifteen minutes before the end made the arrival of Solomon Kalou and Sandro Wagner irrelevant. Roberto Firmino squared for Schipplock and he ran it into the empty net.

Peter Niemeyer's terrible mistake allowed Firmino to set up substitute Sebastian Rudy for a fifth. The resounding 5-0 loss will have left Hertha fans wondering whether they might actually want a new head coach for Christmas.

DW's Ross Dunbar and Jonathan Harding collaborate to type up their top six talking points from all the matchday 16 action in the Bundesliga. From form to defending, there's something for everyone. (18.12.2014)

Dortmund left the capital empty handed, while Bayern showed their quality against Augsburg. Werder and Hannover played out a six-goal thriller and Cologne shocked Schalke. Hamburg and Freiburg drew a blank. (13.12.2014)