Free speech in Sri Lanka under threat amid political turmoil | Asia | An in-depth look at news from across the continent | DW | 06.04.2022

Free speech in Sri Lanka under threat amid political turmoil 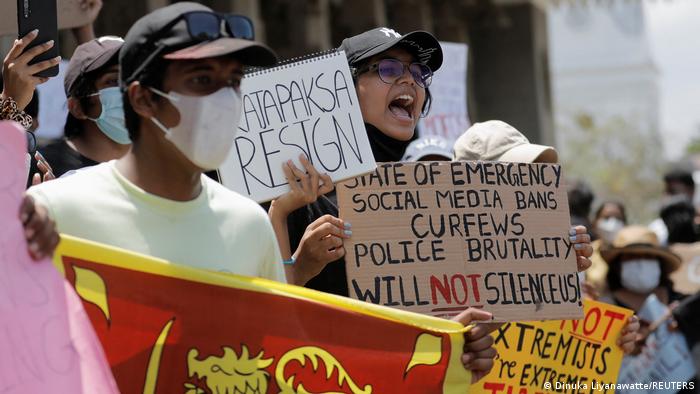 Sri Lanka imposed a temporary nationwide social media blackout on Sunday as part of its efforts to contain public unrest triggered by the country's worst economic crisis in decades.

The suspension of the services was aimed at preventing protesters from organizing, but it was lifted just a few hours later as the move failed to prevent demonstrations.

President Gotabaya Rajapaksa's government also revoked the state of emergency — which gave him sweeping powers to detain people and seize property — within days of imposing it, despite the political and economic turmoil gripping the island nation.

"We have to be ensured of unrestricted access to social media and communication platforms and be allowed to work freely and independently. This could well be the country's Arab Spring moment," Faraz Shauketaly, a prominent Sri Lankan journalist, told DW.

Nine years back, Shauketaly was shot by a group of unidentified men at his home near Colombo. He was at the time working for The Sunday Leader, a newspaper known for its critical reporting of the government.

Dilrukshi Handunnetti, executive director of the Center for Investigative Reporting, said: "We have witnessed this troubling phase in the last 20 years of curtailing freedoms and arbitrary arrests. Public nervousness is visible."

Steven Butler, Asia program coordinator at the Committee to Protect Journalists, called on the government to safeguard media freedom.

"Sri Lanka must not use the state of emergency as a pretext to muzzle press freedom during this critical moment in the country's history, when access to information is vital for all citizens," he said in a statement.

Skyrocketing inflation, weak government finances, ill-timed tax cuts and the COVID-19 pandemic, which have hurt the tourism industry and foreign remittances, have wreaked havoc upon the Sri Lankan economy over the past several months.

The island nation is facing severe shortages of essentials, sharp price rises and crippling power cuts in what is viewed as the South Asian country's most painful downturn since independence from Britain in 1948.

The speaker of the country's parliament warned on Wednesday that the crippling economic crisis risks starvation across the island nation of about 22 million people.

Thousands of people have poured into the streets over the past few days demanding the resignation of President Rajapaksa, blaming him and his influential family — which has long dominated Sri Lankan politics — for the country's economic meltdown.

Crowds of protesters have even attempted to storm the homes of several government figures, including President Rajapaksa. Security forces have dispersed them with tear gas, water cannons and rubber bullets.

Rajapaksa struggles to tackle the crisis

Amid the mass protests, all government ministers offered their resignations on Monday, leaving just the president and his brother, Prime Minister Mahinda Rajapaksa, as the only members of the government who have not stepped down.

In a sign of growing opposition, even 42 lawmakers from the ruling coalition announced that they will vote as independents, leaving the government with less than the 113 needed to maintain a simple majority in parliament.

The president is also struggling to assemble a new team to tackle the crisis. A new finance minister he appointed resigned within 24 hours of being sworn in.

And opposition parties have repeatedly rejected his call for them to join a unity government to resolve the crisis, saying that they first want to see changes to the constitution that will restrict the president's wide-ranging executive powers.

Despite the troubles, Gotabaya Rajapaksa hasn't signaled any willingness to step down. On Wednesday, Chief Government Whip and Highways Minister Johnston Fernando said that the president will not resign.

Colombo has instead sought help from India and China and has also requested financial assistance from the International Monetary Fund. With public anger running high and the government trying to control the protests, reporting on the events from the site of demonstrations has become a challenge.

Several journalists have been assaulted and at least six were taken into custody by police personnel from Sri Lanka's Special Task Force (STF) on March 31, according to the International Federation of Journalists. They were covering an anti-government protest in a suburb of the capital Colombo.

"In a nutshell, I am profoundly concerned that the government will act with a very heavy hand at the first chance they get. The Rajapaksas aren't known for their democratic credentials or light-touch," Sanjana Hattutowa, editor at the online portal Groundviews, told DW.

Ahilan Kadirgamar, senior lecturer at the University of Jaffna, said that any attempts at repression by the government are likely to only increase the determination of the protesting masses.

"Much will depend on how the military responds to the current developments in the weeks ahead," he said.