Franz Marc: The artist who saw nature through a wilder-than-Instagram filter | Culture| Arts, music and lifestyle reporting from Germany | DW | 07.02.2020

Franz Marc: The artist who saw nature through a wilder-than-Instagram filter

Artist Franz Marc (1880-1916) was a rebel. He thought his contemporaries were too materialistic, too intellectual and too prone to believing in technology. He countered these beliefs with his art, painting innocent animals that harmonized with nature and wildly colored tableaux. A tree could be blue or a hare purple, resulting in whimsical worlds that could easily rival modern-day photo filters.

"Marc always questioned the relationship between humans, creatures and creation," Cathrin Klingsöhr-Leroy, director of the Franz Marc Museum in Bavaria's Kochel am See, told DW in 2016, on the occasion of an exhibition at the museum honoring the centennial celebration of his death on March 4, 1916.

The blue horse became Marc's trademark. Like other artists of the pre-World War I avant-garde period — cubists, futurists and those from the expressionist arts collective "Die Brücke" (literally, "the bridge") — Marc did not paint nature as he saw it.

"He formulated an analogy, a new way of painting," said Klingsöhr-Leroy. "He'd probably share Joseph Beuys' understanding of art, which says we should listen more to our feelings, and that every person is an artist and is free to shape his or her own existence."

The stuff of dorm room posters and horse films

Marc's works are so widely aesthetically pleasing that even today they are popular motives for postcards and posters. According to his biographer Brigitte Rossbeck, they are among the most frequently reproduced works in recent art history. The artist's famous horses are even referenced in the 2014 German children's film Bibi & Tina: Voll verhext ("Bibi & Tina: Totally Bewitched"). 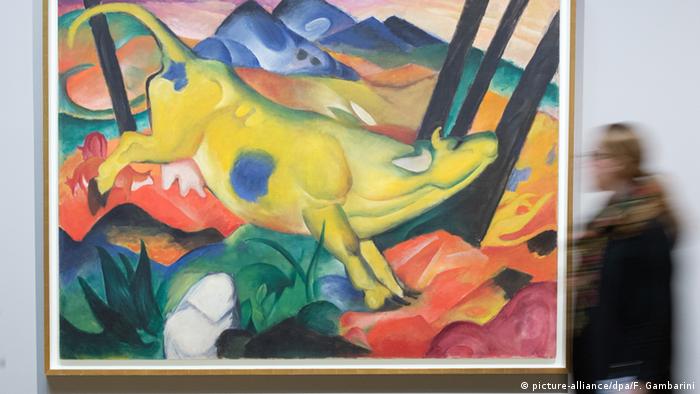 Marc's paintings were not always so popular, however. During the Nazi period, they were deemed "degenerate," along with those of the artist collective he belonged to. The group, dubbed The Blue Rider ("Der Blaue Reiter"), also included his famed colleagues Wassily Kandinsky, Paul Klee and Marc's close friend August Macke.

Marc and Kandinsky co-founded The Blue Rider in 1912 after leaving another collective in Munich known as the Neue Künstlervereinigung.

A native of Munich, Marc kept in contact with many other artists of his day, from composer Arnold Schoenberg to Dadaist Hugo Ball.

A casualty of the Great War

Marc wasn't granted a great deal of time to carve his name into art history. He was not a pacifist but was among the Germans that welcomed World War I. "My heart is not turned against the war," he wrote in November 1914 to his friend Kandinsky, adding, "but I am deeply thankful." The war, Marc hoped, would "cleanse" Europe.

A year and a half later, he would fall at the Battle of Verdun at the age of 36. He left behind 244 oil paintings and 261 drawings and water colors.

Marc was buried in Kochel am See in Bavaria, where he had lived as a young art student. A museum was dedicated to his memory in 1986.

How Germany contributed to creating the Van Gogh myth

How artist Joan Miró broke down walls by painting them

Joan Miró is one of the most renowned painters of the 20th century. Now a major exhibition in Frankfurt celebrates the artist who once declared he wanted to "kill painting." (01.03.2016)

American publisher Christopher Forbes has brought his Napoleon III collection of 2,000 art objects back to Paris for auction. It has allowed the Emperor into the Opera Garnier for the first time. (28.02.2016)