Francis Fukuyama: 'Spirit of 1989 is still around'

Despite rising populism and nationalism worldwide, historian Francis Fukuyama told DW there is hope for liberal democracy. Thirty years after the Berlin Wall fell, "this desire for life in a freer society still exists." 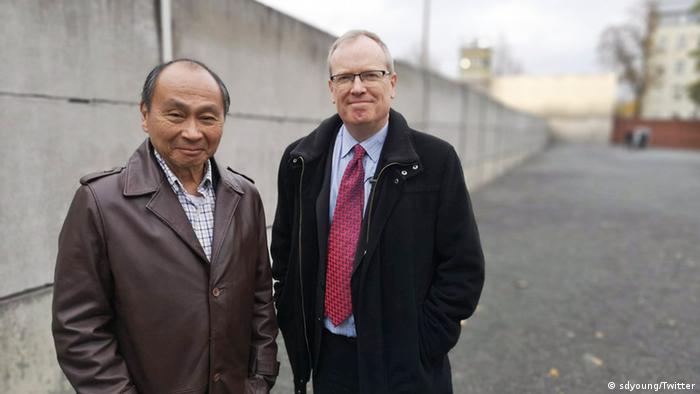 Ahead of the 30th anniversary of the fall of the Berlin Wall, DW spoke with historian Francis Fukuyama, famous for his "The End of History" article. Fukuyama doesn’t regret using this phrase even though many have criticized his analysis as short-sighted. What worries the historian is that the United States' recent tendency to abandon international alliances will leave a vaccuum that could be filled by undemocratic countries. However, he believes the spirit that brought down the Berlin Wall is still alive and sees hope for liberal democracy.

DW: In summer of 1989, you wrote "The End of History." Months later, the Berlin Wall fell. Was that the end of history?

Francis Fukuyama: Well, you have to understand what the end of history phrase means. It comes from the philosopher Hegel. It's really not about events. It's about the direction of human progress. History is a word that you could describe, alternatively as modernization or development. So the Marxists back then said the end of history was going to be a communist utopia. And my argument was in the summer of 1989, it didn't look like we were going to get there. Gorbachev was ruling the Soviet Union. There was reform in the air in the Soviet Union itself. And then these regimes, Hungary, Poland, began to shift towards democracy. So the issue was whether these countries were ever going to back away from communism and end up as liberal democracies. And indeed, you know, in Eastern Europe, at least they did.

Francis Fukuyama on the current state of peace

The Cold War had been a battle of ideologies and that battle had now been won by it clearly by one side.

Well, I think that there was a clear discrediting of communism. That was the striking thing in the Soviet Union itself. Nobody really seemed to believe in Marxism-Leninism anymore. So in that sense, it was a pretty through victory for liberal ideas.

So you'd stay with the phrase "end of history." You don't think you've been misinterpreted — or do you regret using that phrase?

No. I mean, if you if you understand the philosophical origins of the phrase, you know it raises an important question about directionality and progress and the like.

With hindsight, if we just think about the fall of the Berlin Wall, the end of the Cold War, the collapse of communism — was that a real break in history?

In 100 years, people will still mark 1989 as a really important turning point where Europe reunited and the grip of communism really ended, including, two years later, that with the collapse of the Soviet Union itself. The problem is that it's now been replaced by other systems that are also not very good liberal democracies. Throughout Eastern Europe, a lot of the former communist countries, in a way, have been relapsing. So Hungary and Poland are now run by populist governments that are not terribly liberal in terms of their acceptance of diversity, in terms of the concentration of power that violates the rules of modern Europe. So the shift is: There was a decisive break from one form of authoritarian government, but we now seem to be moving into a different period where you're getting a new kind of populism that poses its own challenges to democracy.

Read more: How strong is democracy in former communist Europe?

The Cold War is gone. What has replaced it in the way that we understand the world?

Well, you know, the world in a way is a lot more diverse and you've got authoritarian regimes. The Chinese have a model that's very different. It blends a certain kind of state capitalism with a highly authoritarian, centralized dictatorship. And it's been quite successful. It's stable. It's produced a lot of wealth. You have an Islamic model in the Middle East, which has been much less successful as a real alternative. And then you have these new illiberal democracies that claim to be democracies, but really don't get all the checks and balances that a proper democracy needs. So I don't think that it's possible to clearly divide the world into two camps in the way we did at the time of the Cold War.

So is that more actually more stable or is it more chaotic?

I worry that it is going to be less stable. You know, the United States was really the power that created this liberal world order, both in the integration of a global economy and also in terms of its military alliances — NATO, US-Japan, US-Korea — that in a way underpin the political part of the world order. The United States right now has kind of checked out. There is an administration that says, "well, we don't want this responsibility anymore. We don't like these alliances." And it worries me because either that vacuum is going to be filled by other powers that are not democratic, like Russia and China, or it could simply become more chaotic.

Read more: Is the crisis of capitalism a crisis of democracy?

Why do you think we are seeing the rise of populism and nationalism?

There are two explanations. The conventional wisdom is that it's really economic in nature, that globalization produced winners and losers. And the populism that is there is the revolt of the losers that are attacking the elites for having created this this kind of world.

The other explanation that I actually think is probably a more powerful one is a cultural one where the problem is really the loss of a sense of community and national identity in the face of massive levels of immigration, outsourcing of jobs. And I think that makes people intensely uncomfortable because they actually want to be bound by identities that are stronger than what a liberal society can give them.

What about the European Union? You see that as a model because it's kind of a transnational, post-national state. But if people are clinging to identities, how can that work?

I think people inevitably feel closer to their country of origin rather than to something called Europe, because there just hasn't been enough of an investment in creating this European identity. The project was there. It succeeded in certain respects. But it's still very far from giving people the sense of solidarity that will replace the kind of 20th century nationalisms that we're now seeing resurfacing.

Why isn't democracy cutting through more? Is it inherently weak?

I think democracy has got a lot of strengths that may not be evident in the short run, but will play out over the longer run because the ability to change your leaders, ability to hold them accountable is really important. I think that the kinds of checks and balances that exist in a true liberal democracy are pretty important guarantees that power is not going to be abused. That's what people worry about in a place like Hungary, for example, where, you know, Viktor Orban and the Fidesz party have been gradually dismantling the legal and constitutional checks that really prevent centralized power from being abused.

Here in Berlin, we have a wall that was torn down. US President Donald Trump is building a border wall. Is the liberal democracy model being abandoned in the US? Or is it just a passing phase?

Let's hope it's a passing phase. In the United States, the institutions are actually pretty strong. So they've resisted him at the moment. We're now in an impeachment procedure, which is a mechanism that our constitution gives us to discipline an abusive leader. We don't know how this process is going to play itself out. He's certainly trying to do his best to weaken those checks and balances institutions. But in the end, the most powerful one is an election and we're going to have an election in 2020. We'll have to see how durable American democracy is.

How durable do you think it is?

If I had to bet, I think we're going to survive this. Donald Trump wasn't elected by a majority of the American people. It was the peculiarities of our Electoral College that put him into the presidency. Even though he has been trying to attack these very fundamental constitutional mechanisms, I think most Americans understand how important they are. He reflects the resentments and anger of a certain, very vocal minority in the United States. But I don't really think he represents the American people as a whole.

Read more: Trump and the battle for the American nation

And what about history? What's the future for that?

I wish I knew. You know, somehow people think that I was trying to predict the future. I was actually really trying to describe the present and how we had gotten to the present. We experienced a 30-year period from the early 1970s up until I'd say the mid-2000s, where the democracies in the world expanded tremendously from about 35 to well over 100. For the last 10 years, we've been in a reverse wave or a democratic recession where authoritarian powers are gaining steam. It’s a very dangerous moment for democracy globally. But, whether that recession turns into a full-blown depression like in the 1930s, I think is yet to be seen. One thing that gives me a little bit of hope is that the spirit of 1989 is still around in the world. You've seen in Istanbul and Budapest, you had votes that went against the dominant populist party. You saw it in Armenia, Sudan, Algeria. There are many places where people really don't want to live under a dictatorship. So I think, we have to bear in mind that, this desire for life in a freer society still exists in many parts of the world.

The interview was conducted by Simon Young.

Fewer eastern Germans feel reunification has been beneficial than was the case ten years ago, a new survey has found. A majority of Germans agreed, however, that travel opportunities and freedom of speech are better now. (07.11.2019)

Ronald Reagan is already an honorary citizen of Berlin, so city authorities have always deemed a statue inappropriate. Nonetheless, a bronze replica of the former president is set to be inaugurated at the US Embassy. (07.11.2019)