At least 34,000 protesters took to the streets in France to denounce the bill that's awaiting scrutiny in the Senate. Demonstrators have particularly taken issue with the use of drones and pedestrian camera recognition. 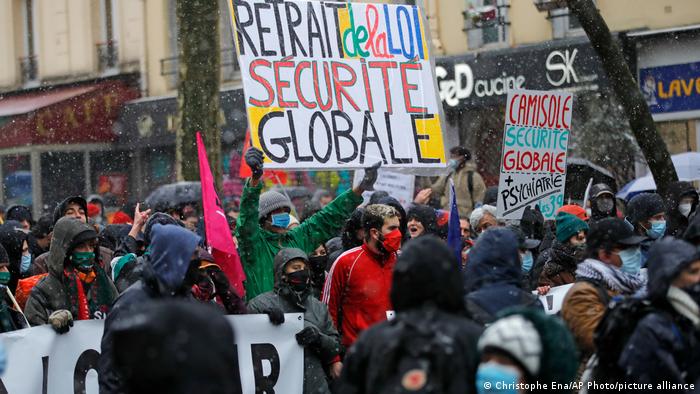 A controversial security bill seen by some as a rightward lurch by President Emmanuel Macron drew at least 34,000 protesters across France Saturday. Organizers spoke of closer to 200,000.

Already, his ruling LREM party has said it would rewrite a controversial Article 24 that would that would restrict others filming police and posting such images on social media.

The bill awaits scrutiny next month in the Senate, France's upper chamber, having already been approved by the National Assembly.

Despite snowfalls, participants in "marches for freedom" carried banners with slogans such as: "Police everywhere, justice nowhere" and "State of emergency, police state."

In Paris, marchers headed toward Bastille Square. In Lille a marcher, identified only as Francois, told news agency AFP: "One asks how far they will go with this law."

Some were angry over the breaking up an illegal New Year's rave in Brittany, describing police actions as "disproportionate."