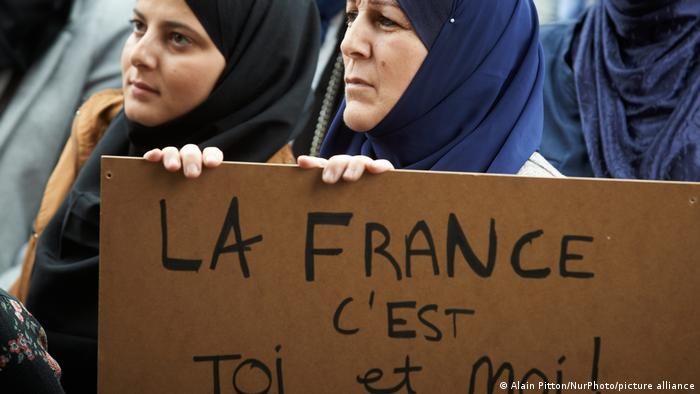 The government has set up a new body to reshape Islam in France, including the domestic training of imams (prayer leaders)

France will host the first summit of the Forum of Islam on Saturday, a new body that aims to reshape life for Muslims in the country and rid the religion of extremism.

The body, meeting in Paris, is made up of clergy and laymen and -women who will help to lead the largest Muslim community in western Europe.

They include imams, influential figures from civil society, prominent intellectuals and business leaders.

France is still reeling from attacks by Islamist extremists that killed hundreds of people over the past decade.

The country is still coming to terms with how hundreds of French Muslims went to fight with the Islamic State (IS) in Syria and Iraq.

But critics worry that the body is an attempt by President Emmanuel Macron's centrist party to attract right-wing support by controlling the Muslim community.

What is the Forum of Islam?

The body, which will meet annually and split off into four working groups, is mirrored on the German model of the Deutsche Islam Konferenz (DIK).

The working groups will focus on the training of imams (prayer leaders), clerics employed in prisons, hospitals and the military, as well as mosque security, and discrimination against Muslims.

Muslims in France have long complained of stigmatism in daily life, and they say discrimination gets noticeably worse after Islamist terror attacks.

All of the members of the forum are handpicked by the government, and women will make up at least a quarter of its members, according to French media reports.

The body replaces the French Council for Muslim Faith, which was set up in 2003 but has been wracked by infighting.

"We want to launch a revolution by putting an end to (foreign influence) on Islam,'' Interior Minister Gerald Darmanin, who is set to partly attend the summit, said in a recent interview with Le Parisien daily.

"Islam is not a religion of foreigners in France, but a French religion that should not depend on foreign money and any authorities abroad," Darmanin said.

Several Gulf Arab states, including Saudi Arabia, have funded the construction of mosques in Europe, some of which have become hotbeds of radical Islam and extremism.

Supporters say the new body will ensure that Muslim practices in France adhere to the country's cherished value of secularism in public life.

Critics see the efforts as a political ploy to lure right-wing voters to Macron's party ahead of April's presidential election.

Macron, who has yet to announce whether he will run for a second term, faces stiff competition in the first round, not only from far-right leader Marine Le Pen, but also two other conservative candidates.

Others say the initiative is another example of institutionalized discrimination that holds the whole community responsible for the violent attacks of a few.

Some Muslims are worried that the government is going too far in trying to control their faith.

Last year, the French parliament approved a law to strengthen oversight of mosques, schools and sports clubs to safeguard them from radical Islamists, and to promote respect for secularism and women's rights.