Simone Veil survived the Auschwitz death camp and went on to be a crusader for women. She joins just a handful of women buried as French heroes. 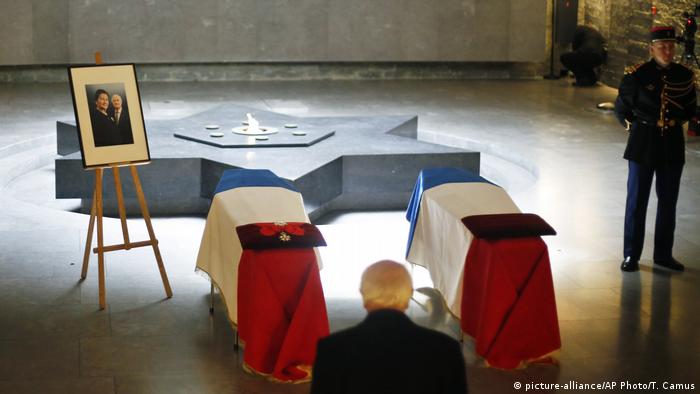 French Holocaust survivor and women's rights icon Simone Veil was interred next to her husband at Paris's Pantheon monument on Sunday, an honor reserved for national heroes. The special memorial came one year after her death on June 30, 2017.

"France loves Simone Veil and loves her for her struggles," President Emmanuel Macron said in a speech at the ceremony.

"We wanted Simone Veil to enter the Pantheon without waiting for generations to pass so that her battles, her dignity and her hope remain a compass in these troubled times."

Born Simone Jacob in 1927 in Nice, she was arrested by the Gestapo in March 1944 at age 16 and deported to Auschwitz. After the camp was liberated, she returned to France to study law.

In 1946 she married Antoine Veil with whom she had two sons. She went on to have a distinguished political career in France, becoming the first female general secretary of the High Council of the Magistrature in 1970.

As Minister of Health from 1974-1979, she was a crusader for women's rights and a crucial figure in achieving the legalization of abortion and the sale of birth control pills.

She was a member of the European Parliament from 1979-1993, during which time she was awarded with Germany's prestigious Charlemagne Prize, awarded for work done to the service of European unification. She served as the body's president from 1979 to 1982, the first woman to hold the post.

Veil is now one of only a handful of women laid to rest at the Pantheon, including the groundbreaking scientist Marie Curie and the anti-Nazi resistance fighters Germaine Tillion and Genevieve de Gaulle-Anthonioz.

She was laid to rest alongside her husband, civil servant Antoine Veil, who died in 2013.

Police have charged two people over the violent murder of Holocaust survivor Mireille Knoll. The 85-year-old, who escaped anti-Jewish purges in Paris during World War II, was stabbed and burned to death last week. (27.03.2018)

She is the only woman to have won two Nobel prizes, one for physics and one for chemistry. After World War I, the scientist and radiologist stood up for international science cooperation in the League of Nations. (07.11.2017)