French citizens have been venting their frustrations over proposed legislation they feel infringes upon press freedoms. Others were there to stand up for the cultural sector, hit hard by coronavirus restrictions.

Tens of thousands of people took to the streets of France on Saturday to express their anger over a security bill they say is anti-democratic.

Others were protesting on behalf of the culture and arts sectors, both of which have been hit hard by the restrictions imposed to prevent the spread of the coronavirus.

Also among the protesters were young people calling for the right to hold rave events, such as the one in Brittany that attracted 2,400 people at the turn of the year, and involved five arrests.

The illegal New Year's rave in northwestern France was eventually broken up by police, some 36 hours after it began, and more than 1,200 people were fined. 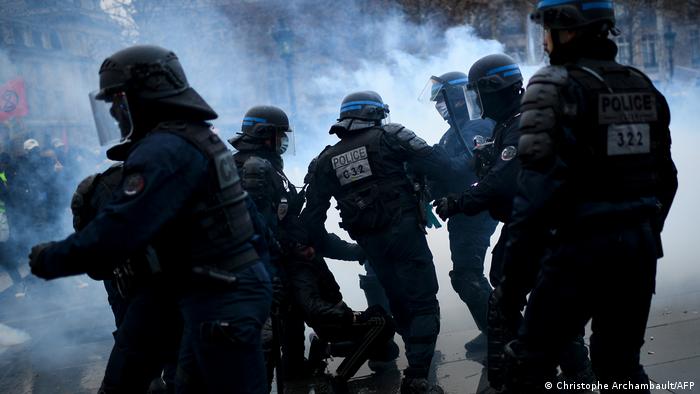 But it was the "Global Security Bill" that attracted most attention on Saturday.

The draft legislation will restrict the filming and publicizing of images or footage of police brutality.

Organizers said 55 rallies occurred across France to protest against the bill.

People are also angry about the use of surveillance tools such as drones and pedestrian cameras.

Footage of White police beating up a Black music producer in his Paris studio on November 21 sparked the outrage over the bill, condemned by many as indicating a move to the right by French President Emmanuel Macron.

The government says the proposed legislation will better protect the police. However, following repeated protests, officials are set to revise the controversial Article 24 of the proposed Security Act which inhibits the filming of police.

Those joining Saturday's protests included activists from the "yellow vests" movement that gripped France for more than a year before the pandemic.