Paris, Mexico City, Madrid and Athens say they'll ban all diesel cars in a bid to improve air quality in their polluted cities. Mayors from 85 cities are meeting in Mexico to decide a strategy to fight climate change. 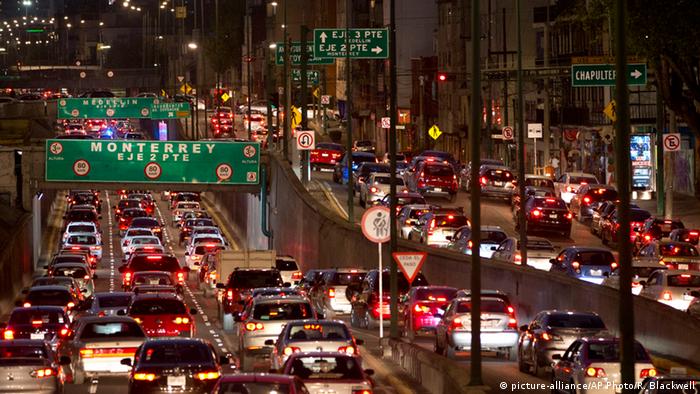 The ambitious plan, which will see all vehicles with diesel engines barred from entering four major world cities within a decade, was announced on Thursday at climate change talks attended by leaders of dozens of metropolitan areas.

The mayors of Paris, Mexico City, Athens and Madrid committed to the plan in a bid to reduce emissions that experts say are exacerbating major health problems, a statement by the organizers of the C40 summit in the Mexican capital said.

"Today the mayors say no to air pollution, no to disease and death affecting particularly the most vulnerable among us. We offer courageous answers to great challenges, and call on automakers to join us," said Anne Hidalgo, Paris' mayor and the new president of the C40 Cities Climate Leadership Group.

Electric vehicles to be prioritized

The cities also vowed to promote clean vehicles by way of financial incentives for cleaner vehicles and by promoting the use of cycle lanes, walking and renewable energy.

Hidalgo told delegates at the summit that the world's biggest cities would need $375 billion (352 billion euros) of investment to curb climate change, adding that "if that amount is made available, humanity will have a chance of surviving."

The commitment was witnessed by representatives from the C40 group's 85 cities, including London, New York, Vancouver, Hong Kong and Seoul.

The world's big cities must collectively cut their carbon footprint by nearly half within a decade if the 196-nation Paris Agreement is to be met, C40 executive director Mark Watts said in an analysis unveiled Thursday at the talks.

This week's meeting was organized in response to US President-elect Donald Trump saying that he would pull America out of the Paris Agreement.

Germany is also considering driving bans on older diesel vehicles in major cities, after admitting that European Union limits on nitrogen oxide or NOx emissions are regularly breached on the country's roads.

In 2010, the EU set the limit at an average of 40 micrograms of NOx per cubic meter during a one-year period. Streets in cities like Munich and Stuttgart have had readings of more than double the limit, the German news agency reported in July.

Under the German proposals, only low-polluting cars would be allowed to carry new blue badges, giving them access to the cities' streets. But no firm proposal has been passed to date.

The opposition Greens have gone further, calling for a complete ban on petrol and diesel vehicles in Germany by 2030.

On Friday, Germany's Environment Minister Barbara Hendricks and her counterparts in the 16 regional assemblies also called on the auto industry to reduce the pollution caused by diesel cars.

Manufacturers bear a "substantial part of the responsibility for the inadequate protection of public health," the ministers said in a joint resolution at the end of a ministerial conference on the environment in Berlin.

The ministers also called for better monitoring of traffic pollution.

The issue gained further traction when German car maker Volkswagen admitted that it had installed technology in its vehicles that manipulated emissions tests.  VW was pushed to the point of bankruptcy as it faced billions in fines and recall costs. It recently announced plans to stop selling diesel cars in the US.