VW to cut 30,000 jobs amid restructuring

Europe's largest carmaker, Volkswagen, is intending to cut tens of thousands of jobs amid a drive to shape its post-Dieselgate future, the company has confirmed. A board meeting is looking into future investments. 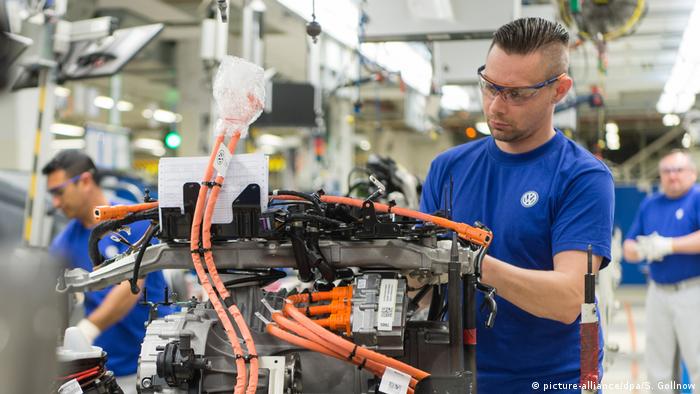 Europe's largest carmaker, Volkswagen, is planning to slash 30,000 jobs at its core VW brand globally to prepare the Wolfsburg-based company for a better future after its massive emissions-cheating scandal.

Executives announced on Friday there would be no compulsory redundancies until the end of 2025, but jobs that would break away as the carmaker focused more on e-mobility and less on combustion-engine technology would not be replaced.

German sites would be especially affected by the cuts, with roughly 23,000 positions to go in Europe's powerhouse. The company added, though, that 9,000 new jobs would be created in future-oriented business divisions.

VW said the job cuts were part of a deal between the works council and management linking a leaner workforce with pledges to invest in future technology.

All in all, Volkswagen is hoping to save up to 3.7 billion euros ($3.9 billion) annually as a result of large-scale restructuring.

"With our future pact, that is our deal between unions and management, we're making a huge leap forward," VW brand chief Herbert Diess said in a statement.

Supervisory board members are meeting to debate major investments in key technologies and plants over the next 5 years. The future pact foresees investments of 3.5 billion euros annually for the next couple of years.

Volkswagen has been struggling to leave its pollution scandal behind and usher in a new era focused on electric cars. The company is still facing major fines from regulators, with the US Department of Justice alone seeking to get up to $14 billion from the carmaker for its large-scale rigging of emissions tests in the US.

Embattled German carmaker Volkswagen is said to have reached an agreement with US regulators for a mix of buybacks and fixes for 80,000 polluting three-liter vehicles, including Porsche and Audi cars. (15.11.2016)

VW's emissions scandal plunged the automaker into its deepest-ever crisis. It brought with it everlasting damage to VW's reputation and massive fees and penalties - not to mention compensation claims from car owners. (14.09.2016)

US election has German companies on edge