Javier Duarte, an ex-state governor from Mexico's ruling party, has been extradited to his home country from Guatemala to face corruption and racketeering charges. He's accused of siphoning off millions of dollars. 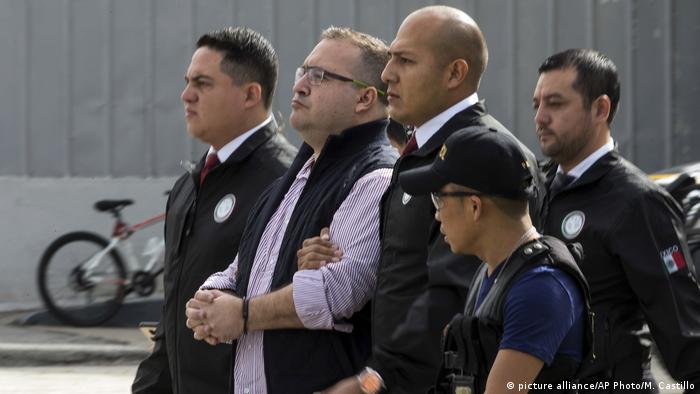 The disgraced former governor of the Gulf coast state of Veracruz arrived at Mexico City's international airport on Monday, handcuffed and flanked by armed guards.

Javier Duarte fled to Guatemala last year and went into hiding amid mounting allegations of embezzlement, influence trafficking, abuse of authority and involvement in organized crime.

"With this kind of actions, the Mexican government stresses its commitment to take concrete steps to reduce impunity ... and strengthen the rule of law," the Mexican Attorney General's Office said in a statement. It added that Duarte had been taken to a Mexico City prison for the first hearings in his case.

The 43-year-old was arrested in April at a Guatemalan resort after more than five months on the run. He denies all charges, claiming they are politically motivated. 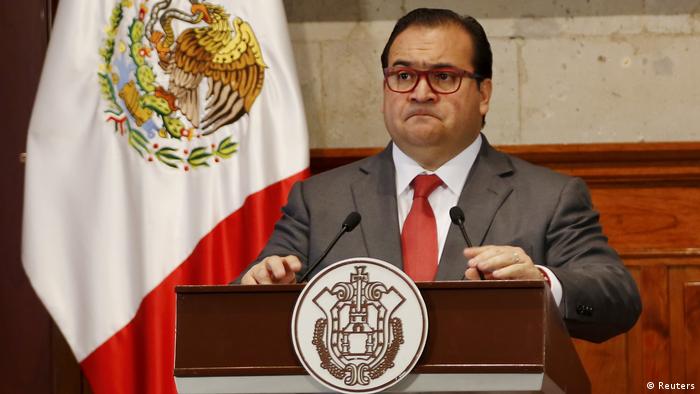 Duarte was elected governor of Veracruz, one of Mexico's most populous states, in 2010. During his six years in office, prosecutors allege he embezzled hundreds of millions of dollars in public funds, the bulk of which he spent on luxury properties and thoroughbred horses.

He left Veracruz more than $2.5 billion (2.2 billion euros) in debt. Over the course of his tenure, the state became one of the most violent in Mexico, registering more than 4,500 murders.

The case could make things difficult for President Enrique Pena Nieto and his ruling Institutional Revolutionary Party (PRI), which has been criticized for failing to stamp out corruption in its ranks.

Damaging for the ruling party?

Pena Nieto himself once described Duarte as a fresh young face for the scandal-stained PRI, "part of a new generation that has been part of the party's renewal."

Duarte is the third Mexican governor-turned fugitive from the ruling party to be arrested abroad in recent months. In April, ex-Tamaulipas Governor Tomas Yarrington was captured in Italy, while Panamanian authorities arrested former Governor Roberto Borge of Quintana Roo state in June.

Although the PRI has dominated Mexican politics for much of the past century, opinion polls suggest there's a good possibility it could be voted out in next year's presidential election.

Independent journalist Heber Lopez was gunned down in his car outside his studio in Oaxaca. Mexico ranks as the most dangerous place in the Western Hemisphere for journalists.