The "Leader of the Nation" released a video on Tuesday, his first appearance since violent clashes threw the country into chaos. Nursultan Nazarbayev denied rumors he fled as well as those of strife with his successor. 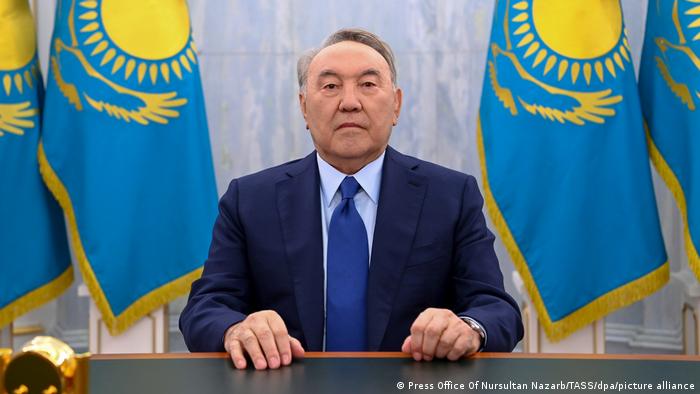 Nursultan Nazarbayev insisted that he had not fled the country, and dismissed rumors of a rift between him and his hand-picked successor

Nursultan Nazarbayev, the father of independent Kazakhstan, released a video message to the world Tuesday, his first appearance since the country was rocked by days of violent protests at the beginning of January.

Nazarbayev, who led the country from 1991 until 2019, has long held outsized sway over Kazakhstan, almost single-handedly making key business and political decisions for the past 30 years.

The name of the country's capital, its university and its airport were all renamed after the strongman, who also hand-picked the current president, Kassym-Jomart Tokayev, to be his successor.

In Tuesday's video, 81-year-old Nazarbayev repeated the claim that he had entirely quit politics, saying, "I am enjoying my well-deserved retirement."

Nazarbayev also used his address to deny that he had fled the country — he had been rumored to be in Switzerland, Dubai, China, or even dead. "I haven't gone anywhere," he said, flanked by Kazakh flags, instead telling viewers that he had been in the capital Nur-Sultan throughout the unrest.

Who's in control of Kazakhstan?

Observers are waiting to see if that is in fact the case. Before stepping down as president, Nazarbayev created a system in which he would still be able to exercise control from behind the scenes.

For decades, the authoritarian built a cult of personality around himself and created a broad and loyal network of cronies, while at the same time installing family members in positions that would allow his clan to reap the rewards of the country's oil and gas riches.

Observers see that cult crashing now as former loyalists are forced to realign with the country's president as a result of January's upheaval.

Tokayev, too, was a loyalist, but with rumors swirling that some close to Nazarbayev were seeking to use the unrest — which killed more than 220 people — as a means to unseat the 68-year-old president, it appears that he is now using his authority to pry Nazarbayev, his loyalists and his family's hands from what power they retained. It has also been reported that several family members fled the country, claims that are as yet unverified.

Nazarbayev's official title as "Leader of the Nation" as well as his position as head of the country's Security Council were intended to protect his safety and status. The set-up was once seen as a possible model for other aging autocrats in the region — such as Alexander Lukashenko of Belarus and Vladimir Putin of Russia — but the speed and severity with which events are proceeding may well change that calculus.

Tokayev, for instance, used the unrest as an opportunity to remove Nazarbayev from the Security Council and appoint himself chairman.

Nazarbayev also sought to use his address on Tuesday to quell rumors of a rift with his successor: "The rumors on this issue have no basis," he said, "President Kassym-Jomart Tokayev has the full power, he's the chairman of the Security Council."

Tokayev will also take the position as leader of the ruling political party, Nur Otan.

How did the unrest in Kazakhstan start?

Unrest in the former Soviet nation began on January 2, in reaction to dramatically rising fuel prices, with small protests quickly spreading across the country. Tokayev sought to calm the situation by announcing a 180-day cap on fuel prices and removing Nazarbayev as head of the National Security Council.

Nazarbayev's removal was seen by some as an attempt to destroy the former leader's patronage — long a thorn in the side of Kazakhstan's ruling elite — yet the move ultimately added to the unrest.

Tokayev made headlines by announcing "shoot to kill" orders and requesting assistance from the Collective Security Treaty Organization (CSTO), a Russia-led military alliance of six former Soviet nations. On January 6, the CSTO sent more than 2,000 troops to Kazakhstan to help quell the protests. Troops were withdrawn again on January 15.

Beyond the 227 people reported dead as a result of the protests, more than 4,300 were injured and thousands arrested.

After days of violent anti-government protests, the situation in Kazakhstan's largest city, Almaty, appears to have stabilized. DW spoke with residents who are now wondering what's next.