Almost 8,000 people have been arrested after a wave of protests that triggered a political crisis in Kazakhstan. The violence has claimed 164 lives, according to the latest government figures. 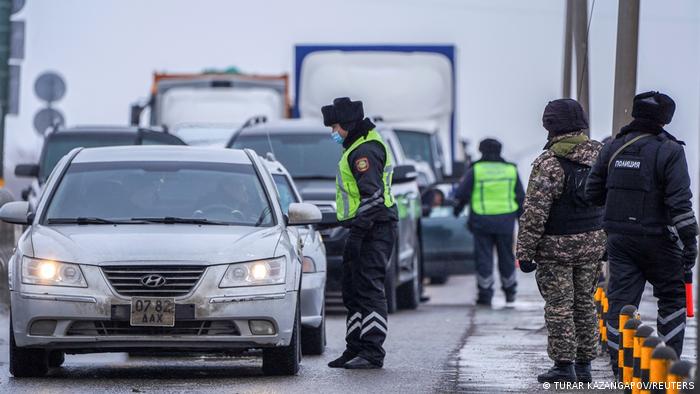 The number of people arrested by security forces during the violent anti-government protests in Kazakhstan has reached 7,939, the Interior Ministry announced on Monday.

A statement from President Kassym-Jomart Tokayev's office said "a substantial number of foreign nationals" were among the detainees.

Authorities have launched a brutal clampdown and were able to largely bring the situation under control in the country's largest city, Almaty, after Russia responded to Tokayev's call for help by sending several thousand soldiers.

"The situation has stabilized in all regions of the country," the presidential statement said.

On Sunday, US Secretary of State Antony Blinken told US outlet ABC News, "The shoot-to-kill order, to the extent it exists, is wrong and should be rescinded."

Is the Kazakh president back in control?

What is the aftermath of the violence?

State television, citing the country's Health Ministry, reported on Sunday that 164 people had been killed during the unrest and over 2,200 were injured. This marks a sharp jump from a previous toll provided by the government, when officials said 40 people have died, including protesters.

Speaking from the Kazakh capital, Nur-Sultan, on Sunday, Interior Minister Erlan Turgumbayev gave a rundown of the damage he claimed was left by the protests and clashes over recent days.

Some 400 cars, mostly police cars, were destroyed in the violence, as well as more than 100 shopping centers and banks.

Detainees are facing charges of violence against government officials, hooliganism, murder and theft, with 125 pre-trial investigations already having begun.

Why did the protest start?

Citizens took to the streets following a steep rise in fuel prices last weekend, but the protests quickly grew in scope to encompass a series of economic and political grievances. Most of their anger was directed at the country's former President Nursultan Nazarbayev, who led the country from the breakup of the Soviet Union in the early 1990s before stepping down and naming Tokayev as his successor in 2019.

However, Nazarbayev kept control of the country's powerful Security Council, and was only ousted by Tokayev during the unrest this week.

Peacekeeping forces from the Russia-dominated Collective Security Treaty Organization (CSTO) entered the country in their thousands after Tokayev appealed for assistance against the protests.

'We are dealing with bandits and terrorists'