The former Catalan president was banned after organizing an illegal Catalan independence referendum in 2014. More than 80 percent of the votes cast were for Catalonia's independence from Spain. 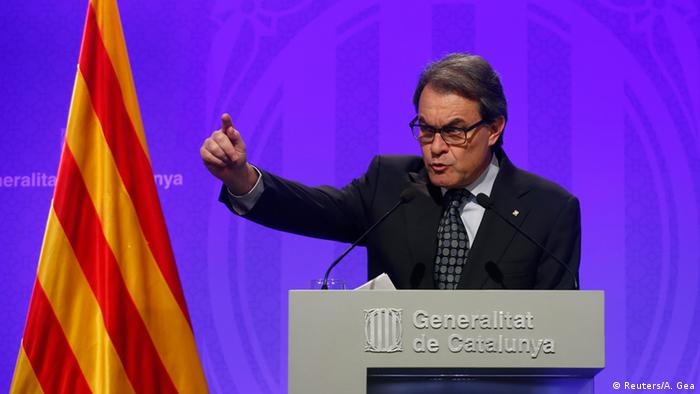 Previous Catalonia President Artur Mas was banned from holding public office for two years Monday for holding an illegal, informal independence referendum in 2014. Mas was also fined 36,500 euros ($38,900). Two other members of his government were also banned from public office for 18 and 21 months.

The former head of Catalonia's regional government, Artur Mas, has gone on trial in Barcelona alongside two aides. He faces a 10-year political ban for organizing a referendum on the region's independence from Spain. (06.02.2017)

The Spanish government has taken legal action to stop a November referendum in the northeastern region. The move has angered many ordinary Catalans who believe Madrid has meddled too much in their affairs. (14.10.2014)

Artur Mas, his deputy in Catalonia, and his education minister face prosecution in Spain for staging a non-binding referendum on Catalan independence. Charges, including abuse of power, were filed on Friday. (22.11.2014)

Mas plans to appeal the decision in Supreme Court. "In the Spanish state, people are hounded for their ideas," said Mas.

Spanish Prime Minister Mariano Rajoy of the Popular Party welcomed the decision and was glad "impunity" did not win out.

The referendum was deemed illegal by Spain's Constitutional Court. Catalonia has its own language and culture and separatist parties hold a majority in the local Catalan assembly. The separatist parties rallied behind Mas during his trial, as well as tens of thousands of supporters outside the courthouse.

"We would do exactly the same thing as we are obliged, as democrats, to listen to the people and obey their mandate at the polls…we will appeal in Spain and then take the case to European courts if we need to," said Mas after Monday's ruling.

Current opinion polls show Catalans are in favor of holding a vote on seceding, a survey from the regional government in December says a slight majority in Catalonia do not support breaking away from Spain.

Separatists say the ban on the referendum is an infringement on their freedom of expression, and plan to move ahead with another referendum vote in September, despite opposition from Rajoy.