Greenpeace says 1.8 million hectares of Indonesian forest is disappearing each year. China and India have launched successful reforestation initiatives in the past 20 years - might Indonesia follow their lead? 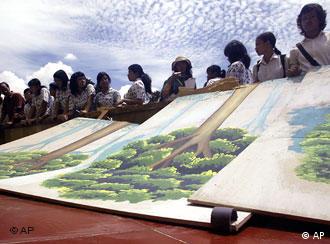 The Indonesian government has ordered a moratorium on new logging permits

Indonesia has one of the world's highest deforestation rates and is the worst emitter of greenhouse gases when it comes to slash-and-burn land clearances.

The government has taken note. This year President Susilo Bambang Yudhoyono tried to put the brakes on these troubling trends by announcing a moratorium on new logging permits.

But as Indonesian forests continue to vanish, some experts say a moratorium won't be enough and that a major reforestation effort is in order.

Several Asian countries, including China and India, have successfully launched similar programs, according to a recent study by the Rights and Resources Initiative (RRI).

RRI is a global coalition that pushes for policy reforms in forest land use.

RRI coordinator Andy White said countries that granted more land use rights to local communities and indigenous peoples were better able to see through their reforestation goals, compared to countries that didn't.

Out of the five nations surveyed, China rehabilitated the most forest land, the study said. Beijing said it replanted 50 million hectares of land between 1990 and 2010. 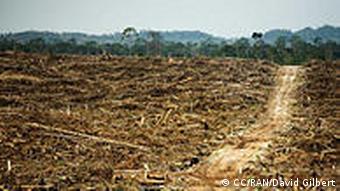 Li Ping, a land rights specialist with NGO Landesa, said that breakthrough was due to land use reforms implemented at the turn of the century.

The Chinese government awarded about 90 percent of public forest land to farmers. In turn, they were permitted to use the parcel of land for two generations, up to 70 years, Li Ping added.

The policy created an incentive for farmers to care for the forest land, particularly as any improvements would benefit future generations. Li Ping said they were also allowed to keep any yields from the land.

The farmers were free to choose which trees they planted, but there were some limitations: The forest land could not be transformed into farming plots, and trees could only be chopped down with an official permit.

Meanwhile, critics say the statistics don't tell the whole story. For example, plantations are classified as woodland, though they absorb far less carbon dioxide than trees in a forest.

RRI coordinator Andy White said the controversy surrounding the definition of forest land is both political and technical in nature. From a climate standpoint, emissions capacity is a key concern.

A natural rainforest is able to store about 306 tons of carbon dioxide per hectare, whereas the amount absorbed by a palm oil plantation is just 63 tons.

"But it's also true that an oil palm plantation holds more carbon than a parking lot or a mine," White told Deutsche Welle. "So these are different land-use options - and why it's better to keep existing forests standing as much as possible."

In addition, reforestation figures don't take into account how much wood a country imports from other nations - meaning though China might be able to maintain its own forests, it does so by getting its supply elsewhere.

Dominic Elson, the author of RRI's report, said countries like China have been able to secure their raw materials supply in this way.

"While they've been buying all the cheap timber from Indonesia, they have been able to build their own plantation business and do it properly," he said. 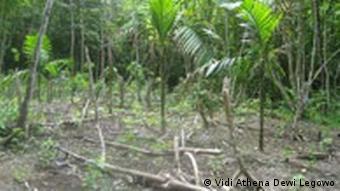 White stressed that other countries shouldn't follow that strategy, though he said the political will shown by China and Vietnam to stop deforestation at home was worthy of praise.

Elson also underscored the importance of giving local populations a say in the matter, since ignoring community stakeholders can easily lead to conflict.

"One reason the Indian government is claiming that they've increased forest cover...is because their forest department is forcibly banging trees into people's cultivated lands," she said.

Indonesia has not been spared conflicts over such matters, but the country also has the chance to take new, more positive approaches to working with local populations.

Kuntoro Mangkusubroto, the head of Indonesia's REDD-plus taskforce, said Indonesia still had time to push through such measures.

The government has promised to cut emissions related to slash-and-burn tactics by 41 percent through 2020.

But that hinges on support from donor nations like Norway, which has pledged $1 billion to aid forest protection efforts in Indonesia. Without international funding, Indonesia has set more modest goals of 26-percent cuts.

"That's something we would do on our own if we involve local populations," Mangkusobroto said.

The Indonesian government needs the support of its indigenous peoples to reforest its devastated woods. But they have become suspicious of visitors examining trees. They fear a sell-off to foreign investors. (15.08.2011)

Germany's IFO Institute for Economic Research says the world's forest areas are shrinking by 7.3 million hectares a year. However, China's forests are growing. (07.04.2010)