Joint Sino-German project combats deforestation | Asia| An in-depth look at news from across the continent | DW | 07.04.2010

Germany's IFO Institute for Economic Research says the world's forest areas are shrinking by 7.3 million hectares a year. However, China's forests are growing. 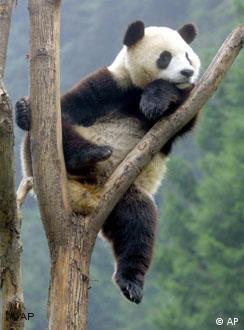 The forest belongs to everybody

Ten years ago, China's forests were in a poor condition. Woodland had been cleared in favor of farming land and trees had been logged to produce millions of disposable chopsticks for example. China is the world's third-largest consumer of wood. 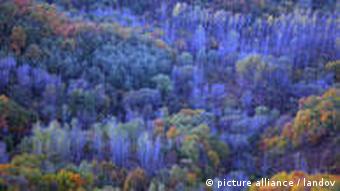 A forest near the capital Beijing

The government is keen to develop sustainable forest management and the GTZ is helping, as Bernhard von der Heyde explains: "We function as consultants and try to implement the Chinese government's specifications. Sustainable forest management means that all parts of the forest, including wood and water, are under constant protection, as well as the earth, biodiversity and the climate."

Von der Heyde is supervising a pilot project in Hainan in southern China that was launched in 2008. His task is to restructure a state-owned forest farm and implement measures such as replacing fast-growing mono cropping with sustainable mixed cropping.

Effective protection against desertification and erosion

These measures will also ensure more effective protection against desertification and erosion – an increasingly important problem in northern China that the government is trying to fight. 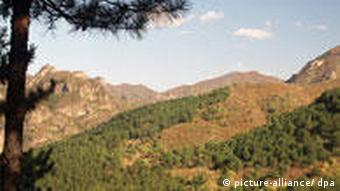 A reforestation project in Miyun, China

It is also important to reeducate the inhabitants of forest areas so that they use the forest's resources without exploiting them.

They have to learn that the forest is important for the global environment, says Chinese forest expert, Luan Shenqiang. "The forest belongs to everybody. We all share responsibility for it. Today's generation has to make sure that future generations have a healthy forest."

In the end, he adds, the whole world will profit if China protects its forests – not only the Chinese because of course carbon emissions and the impact of global warming have no borders.

This is also why Germany is working closely with China to develop sustainable forest management as Von der Heyde explains.

"It’s a joint project. We are working together in an area where we have shared interests, especially when it comes to protecting global environmental goods. Forests have climate-protecting features and they absorb carbon dioxide. This is where the interests of our two governments come together."

The Sino-German pilot project in Hainan is due to end in 2012. If the four-year project is successful, it will be replicated in other parts of China.

China’s reforestation efforts are already yielding fruit. The country's forest is now growing at a rate of around four million hectares a year – about the size of Switzerland.

The world knows very little about the persecution of the indigenous population of West Papua. The region's biodiversity is under increasing threat from gold and copper mines and palm oil plantations. (11.03.2010)

No respite for tigers in new Chinese year

There's no time to lose in combatting desertification, says expert

Increasing desertification leads to huge losses of arable land. Guest commentator Susanne Neubert says that we have a global responsibility to counter soil degradation and there's no time to lose. (26.06.2009)