The Indonesian government needs the support of its indigenous peoples to reforest its devastated woods. But they have become suspicious of visitors examining trees. They fear a sell-off to foreign investors. 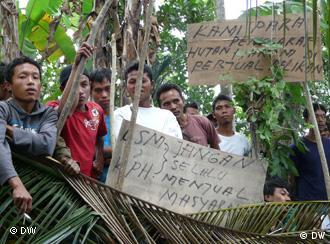 Villagers protest against visitors to their forest

Angry villagers shout, clench their fists and wave banners at a group of international visitors who have come to see the Mejet Forest on the northern part of the Indonesian island of Lombok.

This isn't the reception that the visitors were expecting. The international collection of forestry officials and NGO experts came with good intentions – to take part in a conference aimed at forest conservation.

They want to visit a successful project, but the villagers are disgruntled and suspicious. They believe the tour is aimed at stirring interest among potential foreign investors, looking to buy land.

This has often been the case in the past.

After much to and fro, the forest tour is cancelled. Instead, visitors and villagers meet with the local regent.

This is where disputes are traditionally settled, and the villagers become calm.

They hear about the visitors' true motives - to learn. It's something the villagers are happy to address: They fear for their livelihood and many have invested a lot to make use of the forest. 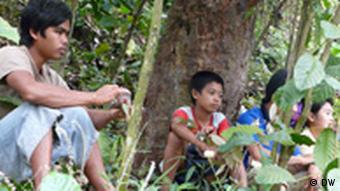 The villagers want to protect the forest for their children

Using the forest is something the villagers take for granted, but it is considered a big problem for the Indonesian government.

The Indonesian forest ministry estimates that there are about 33,000 villages located on or nearby forested areas owned by the state.

According to the law, they are using the forest illegally, even though they have been living there for many generations.

In order to solve the problem, the Indonesian government has offered to lease the forest to the indigenous population.

The local villagers get the right to use a particular woodland in return for committing to take care of it.

But what happens if the forest used is also part of a wildlife sanctuary or a traditional site?

Protecting the forest from within

At the foot of Rinjai, the second highest vulcano in Indonesia, lies the village Santong and the Santong Forest.

A trail leads deeper into the forest. It is bordered by tall trees rising to the sky. They serve as a protective shield for coffee, banana and vanilla plants. 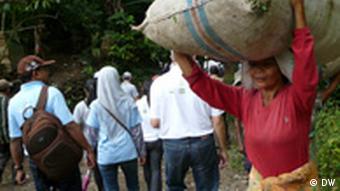 The locals grow coffee and vanilla in the Santong Forest

To boost reforestation, the population here uses agroforestry, a combination of agricultural and forestry techniques, since 1996. The forest covers about 221 hectares, but the indigenous people are allowed to use just 140 hectares, as the remainder is protected landscape. About 260 families live on the forest's yield.

Everything appears to be in harmony. But there are areas of conflict, according to Masidep, a representative of the local Lombok tribe Sasak.

"Most of them think about profit only," Masidep says. But for the indigenous people, the forest's protection is of much higher value. "We need to conserve the forest and also water resources, because water is giving life. Everyone needs to respect that," he says.

The Sasak tribe is an ethnic group that makes up 85 percent of the inhabitants on the Indonesian island Lombok.

Masidep is proud to announce that he can track his line of ancestry back to the 17th Century. In this area, the Sasak clans have been guarding the forest for centuries. Traditionally, the Rangga family is responsible for protecting the forest, says Rangga Topan Yamanullah.

The Sasaks can prove that they have been living in Lombok for a very long time. "There are traditions about old rituals: If you enter the forest, you have to clean yourself first. There are certain days and times, when it is favorable to go. It was different from today," Rangga Topan Yamanullah says.

"Today, it is only considered important what individuals are earning. We on the other hand are here to conserve the balance of the world." 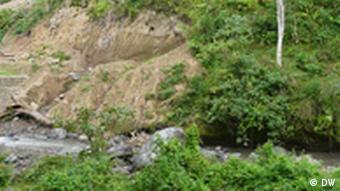 This river is a sacred site for the Sasak

The Sasaks feel that preserving the forest is part of their life-task. But of all the people using Santong Forest, only a third are Sasak. Most are migrants from elsewhere in Indonesia. The Sasaks hope that the Indonesian government will provide them with the same rights to use the forest as the rest of the population.

But they also expect the government to protect their sacred sites and prevent the forests from being turned into just another source of production for the economy.

The Santong Forest example shows that a lot of problems remain unresolved. Who owns the right to use the forest, where are the borders that separate one forest from another, and how can the local population help promote conservation without suffering economic loss?

The Indonesian government has yet to answer these questions.

And time is running out: Indonesia loses a million hectare of forest per year, despite introducing a two-year moratorium on cutting down trees.

International surveys show that the best stewards are those people who have been living within the forest for generations. So it makes sense for the Indonesian government to team up with the indigenous community.

Erna Rosdiana from the Directorate of Social Forestry Development says the forest ministry is working on solutions. The visit to Lombok has opened her eyes to many of the problems. She says she plans to return with something to show, and hopes for a warmer reception next time around.

Tighter environmental regulations and people's movements in India have thwarted the land-grabbing schemes of both Indian and foreign companies, but does this spell doom for India as an attractive investment hub? (12.07.2011)

Five beech forests in Germany have been declared United Nations World Heritage Sites. The areas have been included in a listing for similar ancient forests in Eastern Europe. (25.06.2011)