What's in a name? A person's chance of landing an apartment lease in Germany, that's what. Discrimination against people whose names don't appear to be "German" is common in the rental market, according to reports. 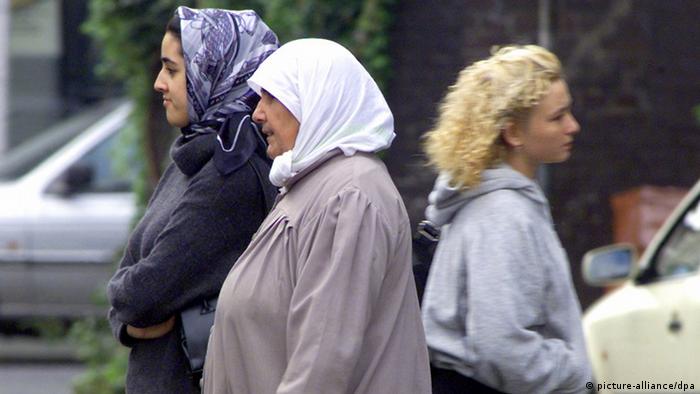 People with foreign-sounding names are discriminated against when they are looking for apartments in Germany, according to reports published on Thursday.

Investigative reporting done by German public broadcaster Bayerischer Rundfunk and news magazine Der Spiegel found that despite being of similar age and employment status, apartment-seekers with Turkish or Arabic names in 10 German cities were significantly less likely to be contacted by landlords to view a flat than applicants with German names. 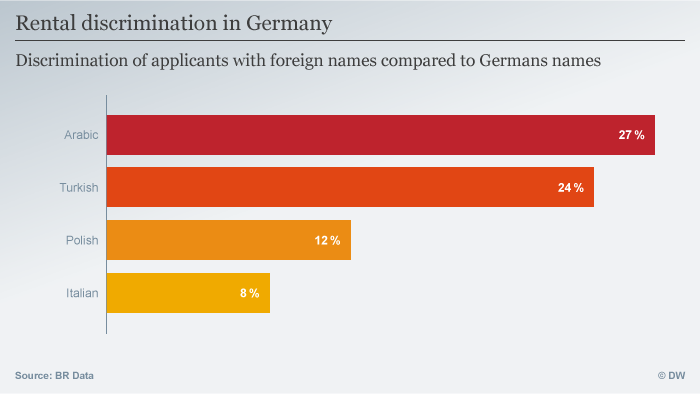 A tough time for Ismail

The two media outlets sent over 20,000 fake inquiries to landlords in Germany. They used 14 fake identities - six German, two Arabic, two Turkish, two Polish and two Italian. A dozen of the applicants were aged 26-27 and split male and female, while two of the German ones were a 25-year-old German male student and a 42-year-old German male doctor.

Around 8,000 inquiries received responses, which were sorted into positive and negative response piles. The investigation examined only the first step of the apartment-seeking process and did not continue into personal interactions with landlords or apartment visits.

The findings boiled down to "Hanna" receiving considerably more invitations to look at an apartment than "Ismail," despite both "renters" being in their late 20s and employed in similar fields.

Of the 10 cities reporters examined, Munich had the highest discrimination rate, with Frankfurt am Main in second. The eastern German cities of Leipzig and Magdeburg had the lowest observed discrimination rate. They also found a discrepancy in gender, as the men with Arabic or Turkish names were much more likely to be discriminated against than women with such names. 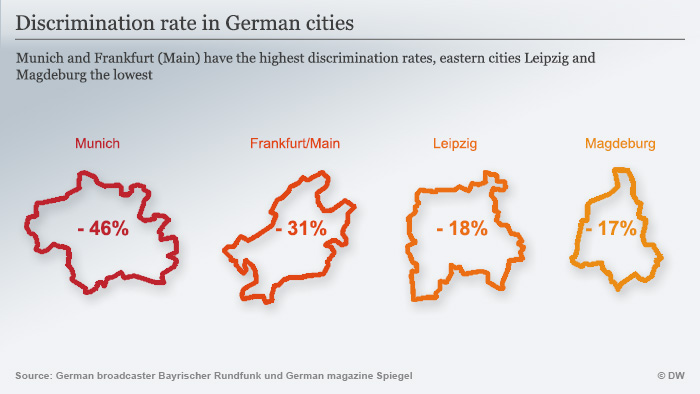 'A hard time on the real estate market'

Christine Lübers, head of the Federal Antil-Discrimination Agency (FADA) in Germany, released a statement Thursday in response to the report.

"Whoever has a name that doesn't sound 'German enough' will have a hard time on the real estate market," the statement read. "It shows not only in new studies, but also in field reports and complaints at the Anti-Discrimination Agency and other support centers for a long time."

"The tighter the housing market, the greater the discrimination. We also see a trend of groups, nationalities or asylum seekers being excluded from the outset in residency listings," the statement continued. "In principle, no one is allowed to deny an apartment viewing or a lease because of ethnical background or racial reasons, like the color of one's skin. The Equal Treatment Act applies in this case: the person seeking residence is entitled to compensation or damages."

What can be done stop this discrimination? Damian Groten of Before in München, a support and information center for people confronted by racism and extremism, told German broadcaster ARD he believes real estate agents and providers need to be sensitized to the issue.

"On the landlord side, we would want serious complaint management - a complaint system that takes people who feel discriminated against in the rental market seriously and then act accordingly," Groten said.