For Afghan farmers, climate change is 'god's will'

Climate change is having a huge impact on Afghanistan's agriculture-based society. Despite changing environment patterns, Afghan farmers have a limited understanding of how climate change is affecting their livelihood. 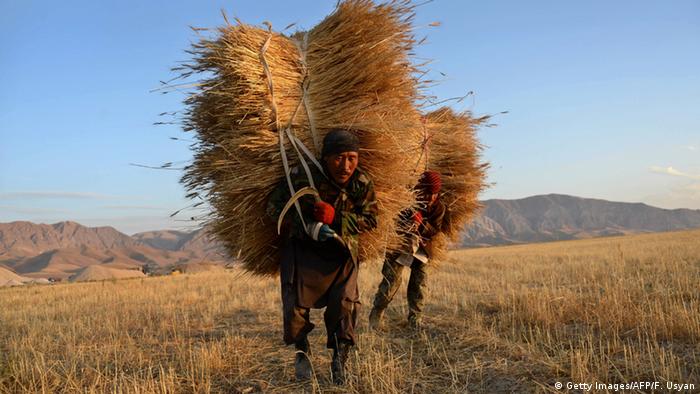 For generations, Salman Mohammadi's family has worked on a farm in the Lal Wa Sar Jangal district in Afghanistan's central Ghor province. Mohammadi inherited the family farm from his father, who had received it from his ancestors. The 32-year-old farmer cultivated vegetables and rice on his farm, storing a portion of the harvest for his family and selling the rest for money. The farming, he recalls, was hard but the life was simple.

"There was enough to eat, and we earned enough money to buy other things that we could not grow on the farm," Mohammadi told DW.

But things started to change in the past few years as Mohammadi noticed a disturbance in the rain and snowfall patterns. The problems for him and many other Afghan farmers peaked during the 2008 drought that hit parts of the country.

The livelihood of almost 85 percent of the Afghan population - living in rural areas and largely dependent on agriculture - has been severely affected in the past few decades due to prolonged droughts and declining water sources.

"Our problems increased due to bad harvests," Mohammadi said, adding that he had to give up on his family occupation and leave his village because he could not make both ends meet.

"I was not able feed my family, so I moved to Kabul," Mohammadi said.

Mohammadi's case is not unique. Over the past decades, many Afghan farmers have had to leave farming and move to the capital Kabul to earn a living. Although the worsening security is one of the reasons behind this exodus, climate change, too, plays a role.

Creating climate awareness is a challenge

Mohammadi, as well as other farmers, are unaware of the impact of climate change on their lives. Most of them attribute it to the will of god.

"Climate change and environment protection are relatively new concepts for Afghans, but we are trying to raise awareness about them," Samim Hoshmand, an official at the National Environment Protection Agency, told DW.

"Our awareness campaign can help farmers undertake certain measures to protect themselves from the negative effects of the global climate change," Hoshmand added.

Afghanistan only contributes 0.06 percent of the world's total greenhouse gas emissions, but it is among the countries most vulnerable to changes associated with climate change, according to a 2016 study, titled Climate Change in Afghanistan: Perspectives and Opportunities, carried out by Heinrich Böll Stiftung Afghanistan.

As harvesting in Afghanistan mostly involves traditional methods, farmers are unaware about the modern techniques with which they can cope with climate change.

Afghan officials also have to deal with a number of cultural and religious taboos when educating farmers about global warming and climate change phenomena.

For example, Mohammadi believes his country is experiencing less rainfall because "god is punishing" them for the ongoing violence and war.

Also, Mohammadi is not interested in understanding the reasons behind the changing weather patterns. It is certainly not his top priority as he has to deal with the harsh city life in Kabul.