Global warming scientists have warned that heat levels in South Asia, home to some 1.5 billion people, could reach uninhabitable levels by 2100. India, Pakistan and Bangladesh would be the worst affected regions. 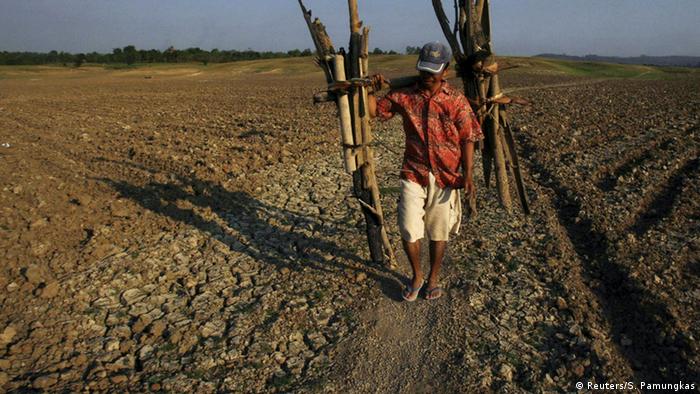 If climate change continues at its current pace, deadly heatwaves could make large parts of South Asia too hot for human survival by the end of the century, researchers at the Massachusetts Institute of Technology (MIT) warned on Wednesday.

"The most intense hazard from extreme future heat waves is concentrated around the densely populated agricultural regions of the Ganges and Indus river basins," wrote the authors of the study. Up to 1.5 billion could see their hometowns become impossible to live in.

Today, around 2 percent of India's population is exposed to the extreme combinations of heat and humidity analyzed in the study. However, according to the study published in the journal Science Advances, that figure could rise to as much as 70 percent unless major efforts are taken to curb climate-warming carbon emissions.

"Climate change is not an abstract concept, it is impacting huge numbers of vulnerable people," said MIT professor Elfatih Eltahir. "Business as usual runs the risk of having extremely lethal heat waves."

Unlike previous climate change and temperature projections, the MIT study also looked at humidity and the body's ability to cool down, as well as heat levels. The three factors make up what's called a "wet-bulb temperature," which is measured by recording the temperature of the air when a wet cloth is wrapped around the thermometer. Climate scientists use this measurement to estimate how easily water can evaporate.

According to climate scientists, humans can survive a wet-bulb temperature of about 35 degrees Celsius (95 degrees Fahrenheit), while anything beyond could cause the body to have difficulty sweating to cool down. Such a phenomenon could lead to heat stroke or even death within just a few hours.

It is hard to imagine conditions that are too hot for people to survive for a more than a few minutes, but that is exactly what is being discussed in this paper," Chris Field, a Stanford University climate scientist who was not involved in the study, told the Associated Press news agency. "And of course, the danger threshold for punishing heat and humidity is lower for people who are ill or elderly."

South Asia's densely populated farming are likely to fare the worst; deforestation has left workers particularly exposed to the sun, while the rural surroundings leave little chance of people having access to electricity and air conditioning units.

As recently as 2015, a heat wave across India and Pakistan killed some 3,500 people.

The study also predicts that the Gulf could become the world's hottest region by 2100, due to climate change. However, citizens in the region are significantly better off financially than those in the Ganges and Indus river basins, meaning they will be able to better respond to the risks posed by relentlessly blistering temperatures.

The affected South Asia reasons also rely on crops and livestock, while the oil-rich Gulf region imports almost all of its food.

Less developed medical infrastructure in the rural regions of India, Pakistan and Bangladesh would also see diseases and infections flourish in the in the scorching temperatures, compounding the just how dangerous merely venturing outside could become in the coming decades.

In the study, scientists also estimated wet-bulb temperatures under the scenario in which concerted action was taken was to limit global warming. Although temperatures would still reach dangerous levels of around 31 degrees Celsius - a level considered dangerous but significantly less fatal - the percentage of South Asia exposed to potentially fatal temperatures would increase from zero to just 2 percent.

Packing a visual punch for the environment

To grab people's attention and raise environmental awareness, artists, musicians and activists have turned to more visual ways of getting the message across - including sometimes drastic measures. (23.06.2017)

Over the decades, artists, musicians and activists have created powerful visual and experiential statements to get their message across - including sometimes extreme measures. (23.06.2017)