Follow the witch through the forest: 5 days hiking Germany's Harz

Hikers can trek 94 kilometers (58 miles) through northern Germany's Harz National Park, learn about its role in Cold War history and witness firsthand how these forests inspired centuries of folklore. 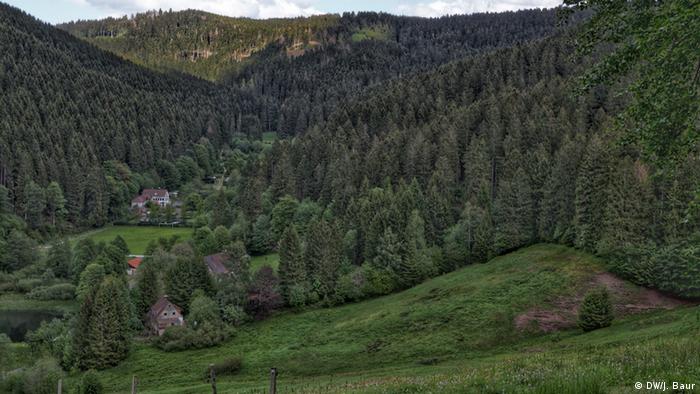 As I was nearing the end of the fourth day on the Harzer-Hexen-Stieg — the five-day hiking route known in English as 'The Witches' Trail' — my brain kept sending me the same message as I followed the trail marker of a witch riding a broomstick: "My feet are throbbing. My feet are throbbing. My feet are... still throbbing." At this point, the only thing keeping me going was the fact that I knew — thanks to the Harz tourism app — that I was close to the end of the day's nearly 30-kilometer (18.6-mile) hike, the longest stage of the trail. Soon I would be rewarded with some hearty local food and cold beer before plopping into bed at Pension Haus Rodenstein, a B&B that met my lodging criteria of a reasonable price (€44 or $49 USD) and proximity to the trail. 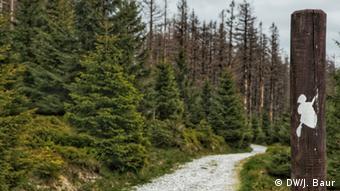 Follow the witch: A common, painted trail marker for the Harzer-Hexen-Stieg

The Harzer-Hexen-Stieg runs 94 kilometers (58 miles) from the town of Osterode to Thale over the Brocken, northern Germany's highest mountain at 1,142 meters (3,747 ft). I followed the five stages in as many days using the Harz tourism app on my smartphone (constantly kept charged thanks to a portable power bank) as my guide, knowing I'd add another 10 kilometers (6 miles) walking through towns and venturing off-trail whenever something shiny grabbed my attention. Hopping off the train at Osterode, I cut through the fairytale-like city center and found the official starting point (or end if you're coming from Thale) of the trail.

I first became aware of the Harz mountains and the Brocken when reading the works of some of Germany's great writers, like Goethe and Heinrich Heine. Legends of witches congregating with the devil being the main theme of the mountain's mythology. I, however, was more interested in a refreshing time spent in nature rather than reveling with the devil. 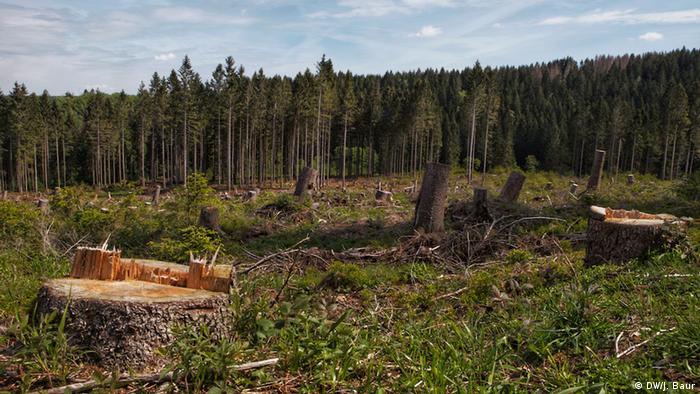 The first stage from Osterode to Buntenbock was a warm-up to the more rigorous stages ahead. It began on sidewalks before sliding into the forest sporting a healthy shade of green — a gentle jaunt that made my hiking boots feel a bit like overkill given the dry, pleasant weather.

On the second day of my hike, I couldn't help but notice neatly piled logs lining the trail like giant anthills. The damage was astonishing. It felt as if I had stumbled across the woodland equivalent of mass slaughter.

Determined to find out what happened, I did some research. Storms from as far back as 2017 seem to be the main culprit causing landslides which destroyed swathes of forest, leaving the woodland with bald spots. Then there's the bark beetle, which has wreaked such havoc that the park authorities now warn that the dead tree husks the beetles leave behind will be a sight visitors will have to get used to. These recent developments add to the region's 3,000-year legacy of mining and deforestation. Locals have tried to replace lost woodlands with fast-growing spruce over the past few centuries, but the human impact is still noticeable.

These reasons are why Harz National Park calls itself a developing national park. So-called "nature developing zones" (regions where park authorities are working to redevelop damaged areas so that they are once again self-sustaining) account for approximately 40 percent of the park. The other 60 percent is left alone, healthy enough to maintain itself. The park's motto to "Let nature be nature" sets the goal that three-fourths of the park be classified as naturally developing forest without human intervention by 2022.

On the third day, just before Torfhaus, the western gateway to Harz National Park where the woodlands thicken and the silences grow more pronounced, I noticed a trail marker with "4 km zur DDR" scribbled in red marker. Four kilometers to the German Democratic Republic (GDR), the Soviet-backed regime that rose out of the ashes of World War II in East Germany. Despite the sign, the GDR was consigned to history nearly 30 years ago and with it any barriers to climbing the Brocken mountain.

But prior to reunification in 1990, the former East German government declared the Brocken, which was immediately adjacent to the former West Germany, an out-of-bounds area. In 1985, the GDR constructed a military wall on top of the mountain surrounding two radio towers that looked like they were salvaged from the set of a 1950s science fiction B-movie. The towers were GDR and Soviet listening posts, which operated under the code names of "Jenissej" and "Urian" and could reportedly eavesdrop over hundreds of kilometers. 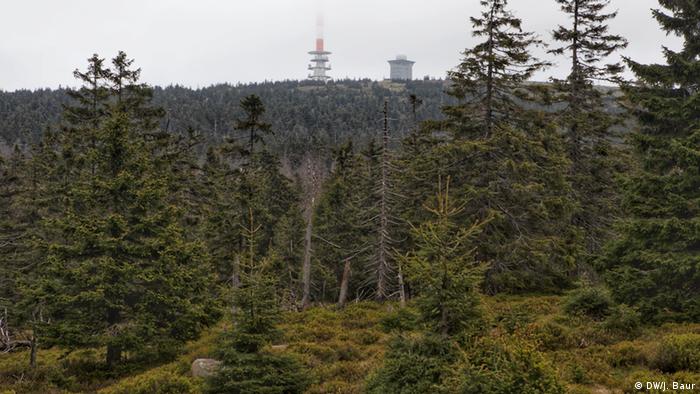 The "Jenissej" and "Urian" radio towers as seen from Torfhaus, through the fog and on top of the Brocken

In November of 1989, protest movements along the East German border led to the fall of the Berlin Wall but the Brocken remained closed. That is until over a thousand protestors gathered on December 3rd with signs demanding a "Free People, Free Brocken." The army buckled after hours of growing demonstrations with two or three thousand people pouring in as the gates opened. A newly freed people marched to the top that day and tourism soon followed with a hotel, restaurant, and steam train to give the mountain back to the people. A boulder with the inscription "DER BROCKEN WIEDER FREI 1989" (free again) says it all.

"Excuse me," I said to a passing woman on my way up the Brocken. "Is it still foggy up there?"

She looked back from where she just came and answered me. "Yeah, but just wait 10 minutes." Germans know as well as anyone that the weather can change in an instant, especially at the Brocken.

Only a handful of visitors were on the mountain with me during the morning hour as a quilt of light-gray clouds hovered above. The quiet would become a theme throughout the hike, often going hours without seeing or hearing another soul.

Standing on the dirt path where the military wall once stood with views across the former boundaries of East and West Germany, my focus drifted from hiking to admiring the bleak beauty of the Brocken.

Where the witches dance

I assumed the sight-seeing would come to an end following the Brocken; just a tree-lined ramble into Thale for the final two days. My hunch was corrected as I rambled over trail alongside the Bode River and into the 10-kilometer (6.2-mile) long ravine of Bodetal, surrounded by a mix of lush forest and barren boulders climbing toward the sky.

There's something meditative about a walk alongside a steadily flowing river, which sums up the final stage from Altenbrak to Thale. But with just 1.4 kilometers (4,593 feet) left until Thale, I followed a sign up a steep switchback trail to Hexentanzplatz — the 'Witches' Dance Floor' — which is supposedly the site of Old Saxon pagan rituals. The detour made sense given the theme of the trail. Plus by then, my body had become accustomed to the physical challenge of the hike and even yearned for it. 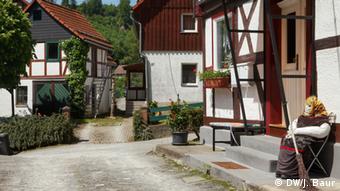 Witches start to appear more frequently on the fourth stage, hiking through the village of Neuwerk

I embraced the challenge and surged through the 250-meter (820-foot) climb in 1.5 kilometers (approximately one mile). At the top of the climb, I followed a flat dirt path past the rocky La Viershöhe viewpoint of the gorge below and continued to Hexentanzplatz. With the Brocken fog behind me, the summer sun had finally awoken from its hibernation and brought out swarms of family revelers. There was a festival atmosphere complete with food stalls serving up burgers and bratwursts alongside souvenir shops with no shortage of witch-themed souvenirs.

Not having any use for witch-themed kitsch, I spun around in a circle, looking for a route down to the Thale train station to end my hike on the Harzer-Hexen-Stieg. "Over here!" an old man yelled out, pointing the way.

With that, I headed past an ongoing show at the Bergtheater, through the last bit of forest, and rejoined the final stretch of Harzer-Hexen-Stieg in Thale. Outside the train station, there was a sign with a white silhouette of a witch riding a broomstick, the very same I'd seen on trees as a brush of paint marking the way from Osterode to 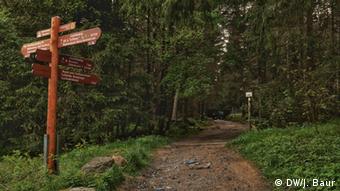 Thale. It reminded me of the frequent hiking wayfinders I'd seen throughout Germany's numerous 'Fernwanderwege,' or long-distance hiking trails, diligently guiding me from one town to the next whether I was on the Rheinsteig in Königswinter or heading to Winterberg on the Rothaarsteig. (Seriously, Germany has some of the best, most detailed hiking infrastructure you can find the world over.)

Above the witch in green letters were the words "START/ ZIEL." The beginning or end of this breezy hike across the Harz mountains. After lugging around a backpack over 27 hours of hiking 106 kilometers (65.9 miles) in 5 days, I happily chose 'ZIEL'.

Lace up your boots and off you go. Discover European landscapes step by step on well-known and less familiar long-distance hiking routes. Here are ten trail tips for boundless hiking pleasure every step of the way. (23.08.2019)